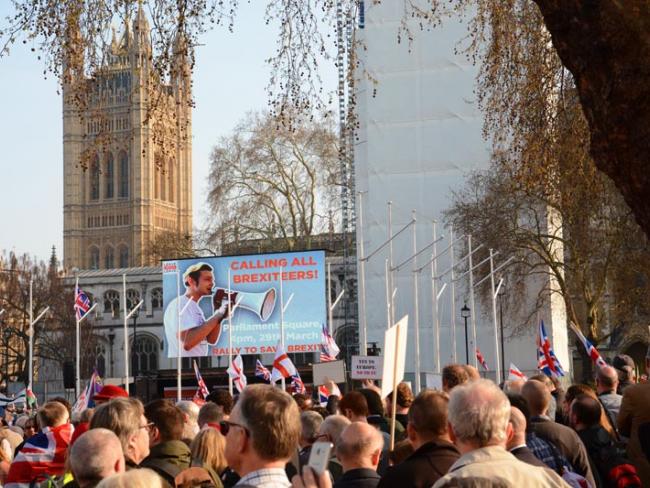 As Britain edges its way towards leaving the EU, the efforts of the establishment to block the implementation of our decision are becoming increasingly desperate. We ‘ve all had to witness the anti-democratic antics in parliament, so far unsuccessful but by no means finished. The opponents of British independence will stop at nothing.

Shamefully, these efforts have been supported by the majority of trade unions, in spite of claiming to represent the interests of their members.

Siding with the establishment

With honourable exceptions such as RMT and Aslef, they have shown willing to exhibit contempt for the many trade unionists who voted Leave. They have sided with the pro-EU establishment, for the rule of Britain from abroad.

This has been extended to the suppressing of union officers who speak up for Brexit. In the latest, outrageous, example, the Fire Brigades Union (FBU) has high-handedly acted against one of its own executive council members.

In mid June Paul Embery, executive council member for London, was hauled before a hearing, then removed from office and debarred for two years.  His offence? He spoke at a Leave Means Leave rally in London on 29 March – the day we should have left the EU – in passionate  support of Brexit. The firefighters’ union, which argued for Remain in the 2016 referendum, has a policy of opposing a No Deal Brexit.

‘The speech was made in a private capacity.’

The speech was made on a Friday evening, in his own time, in a private capacity. Footage of the speech, available on YouTube, shows that no mention was made at the rally of Embery’s role in the FBU.

This is not the first time trade union officers have been hounded out after expressing views on Brexit which are uncomfortable for national executives. In April 2016, the chair of the Scotland and Northern Ireland regional committee of the Musicians’ Union (an unpaid, elected post) was ordered to “consider his position” (effectively an ousting) after he spoke at a Grassroots Out rally in Glasgow.

The officer, a nationally known composer whose work has been performed at the London Proms, had held his post for 15 years.

The Musicians’ Union’s policy on the Referendum had been one of welcoming open debate, but on the very day of the rally the Executive announced it had unilaterally changed the union’s policy to campaign to Remain in the EU.

Paul Embery had been an FBU official for 20 years. In his speech at the rally in March he said that the divide in Britain wasn’t between Leave and Remain, but “between democrats and anti-democrats”.

At the hearing he was accused of “acting in a way prejudicial to the interests of the union”. This is how the FBU’s leadership defines speaking up for British independence and democracy.

There has been a swift response from FBU members, with hundreds of messages of support including from some who don’t necessarily agree with his pro-Brexit views but are shocked by the stifling of open debate.

The London Regional Committee of the FBU issued a strongly worded statement on 21 June saying that the action is wrong and “goes against the entire ethos of our union.” It demands Embery’s immediate reinstatement.

The attempt not only to overturn the Leave vote but to stop people from campaigning against the decision, or even from speaking up for Brexit, is a dangerous development in British political life. Many academics, civil servants and other professionals speak privately of how they feel their jobs could be threatened if they say what they think.

In certain circles it has become acceptable to label any who voted Leave as racist and xenophobic – and hence not deserving of consideration or discussion. That kind of thinking is creeping into trade unions too. Trade unionists cannot allow this anti-democratic suppression of debate. They must respond, and strongly.