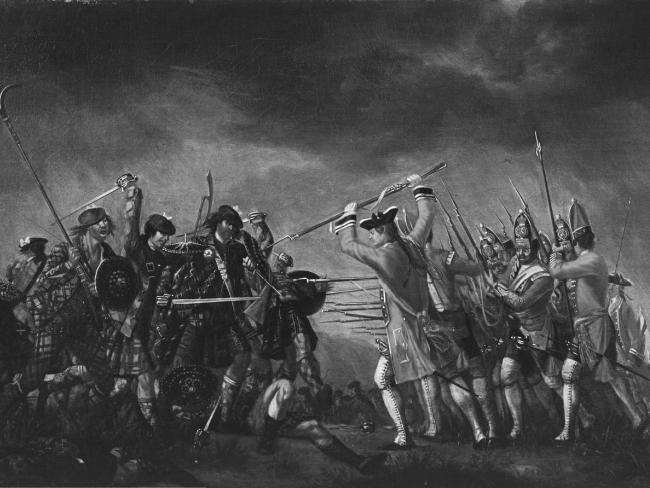 The battle of Culloden, 1746. Scots – including highlanders – actually fought on both sides.

When Scotland and England united in 1707, it set the scene for progress throughout Britain…

Great Britain was born as a state in 1707. The Treaty of Union was ratified by the Scottish Parliament on 16 January 1707 amidst much furore and rhetoric and a large measure of disdain and distaste in both England and Scotland. After ratification by the Parliament in Westminster, the separate parliaments of England and Scotland ceased to exist. They were replaced by a Parliament of Great Britain. They had already shared a ruler, Queen Anne of the House of Stuart.

This union was a formal recognition of the ascendancy of capitalism over feudalism in all of this country. The absolutist Stuart monarchs of the 17th century toyed with union; the brief but productive Commonwealth (1649 to 1660) made tentative moves in that direction. Once united, the combined resources and talents of the two countries were at the service of capital, then in its dynamic phase.

Some Scots cried. “We are bought and sold for English gold.” That was not far off the mark in a way, though not by direct bribery. Budding Scottish capitalism was weak compared to that in England. It had been mortally wounded by recklessly pouring capital into the ill-fated Darien Scheme. This damaged the Scottish economy on a scale greater than the failures of RBS and others in 2008.

In the 1690s Scots venture capitalists had proposed the establishment of a colony, Darien, on the Panama isthmus in Central America. This was an attempt to match the burgeoning imperial ambition and colonial acquisitions of English capitalism. The scheme aimed to cut the time and cost of transporting goods to and from China and Asia and to establish Scotland as a power to match France, Holland and England. An estimated £400,000 was raised; half the total capital available at that time throughout the country below the tribal Highlands.

The one person who had visited the Darien peninsula warned against the venture. Lionel Wafer, a buccaneer and ship’s surgeon, told all who would listen about the heat, humidity and fever-plagued conditions, but he was ignored. The colonisers of the first five ships that sailed from Leith in 1698 were attacked by disease and by the Spanish. A third of them, around 400 people, were dead within months of landing. Over the next two years others arrived to meet a similar fate. In all, nine ships were lost; 2,000 men, women and children were drowned, buried, captured by the Spanish or sold to English plantation owners. Half the capital, £200,000, was lost.

Scotland was bankrupt; English capitalism took advantage. The treaty of 1707 did not allow for equal terms of trade. The Scottish linen industry was impoverished by cheap imports brought from Ulster by English merchants. Scottish coal owners had to sell cheaply into the English market.

There were bloody but relatively short-lived anti-Union riots. However there was little enthusiasm outside of the Highlands for a return to the absolutism of the Stuarts. James Edward Stuart, the Old Pretender and half-brother to Anne, received only marginal support for his claim to the throne in 1715. That was despite riots in London against the Hanoverian king, George I.

The Stuarts always wanted to be restored to the crowns of Scotland and England; they intended to rule as their forefathers from London, not Edinburgh. By the time of the 1745 Rebellion of Charles Edward the Young Pretender, the Stuarts were even more marginal though supported by French loans. Their army reached as far south as Derby, before retreating in the face of the delayed British response.

The battle of Culloden in 1746 ended the uprising. The British army there included three Scots battalions and two of Highlanders. Nonetheless the vengeance wreaked afterwards on the people of the Highlands was nothing short of genocide. That began a process carried on by their own clan chiefs and landowners through the Highland Clearances which took place over the following 100 years.

Across Britain other changes came with the rise of modern industry and of the proletariat that grew with it. Workers dug coal, made iron and textiles, built ships and railways and much more. In the 200 years since the last Jacobite Rebellion, the population of Britain rose from under 10 million to over 50 million, more than 95 per cent of us being workers.

Our own organisations, unions and political parties and labour movements born of those unions were uniquely non-sectarian and nationally based. A common interest against capital overrode earlier divisions of religion and location that formed the background to the political events of the 17th and early 18th centuries. For the most part British workers moved on from religious and linguistic backwardness, some of which is still prevalent in European trade unions to this day.

Since industrialisation Scottish workers have been an important part of the British working class, whether exercising their skills, science and creativity or organising in defence of our class. The union of the two countries into a Britain made by workers has made us, with our national institutions and organisation, the guardians of a working class future for this, single, nation.