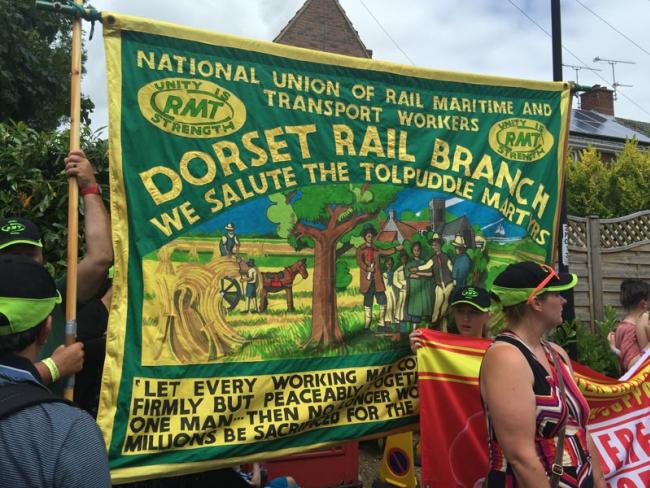 The march through the village is a highlight of the Tolpuddle festival, full of union banners. Photo Workers.

In 1833 farm labourers in the Dorset village of Tolpuddle suffered severe reductions in their wages, prompting forty men to form a trade union. In February 1834 six of them were arrested: James Brine, James Hammett, George Loveless, James Loveless, Thomas Standfield and John Standfield. Convicted of swearing a secret oath, they were transported to Australia, triggering widespread agitation for their release and return.

Progressing alongside the Industrial Revolution was a parallel agrarian revolution, and poorly paid agricultural workers were a significantly large though often overlooked group. The long process of enclosure, whose high point came between 1770 and 1830, saw land carved up by act of parliament and given to bigger landowners. Lands once held in common and villagers’ small strips of land for food production were expropriated. If you remained in the countryside and wanted to put food in your belly, you had no choice but to work for large landowners who dictated the rate of pay.

With no land of their own, the Tolpuddle labourers earned a weekly wage on the farm of George Frampton, a major local landowner. At the beginning of the 1830s the going rate in Tolpuddle was 9 shillings a week. This would have been sufficient to buy bread but not enough to pay rent and purchase other foods. Yet, in 1833, the landowners cut the rate from 9 shillings to 8, then later to 7 and were considering a further reduction to 6.

These were starvation wages. How did the rural poor respond to such desperate conditions? Some suffered in silence, others moved to work in the growing cities. Some fought back: in the Captain Swing uprisings across East Anglia in 1830, labourers set fire to hayricks: 644 were imprisoned, 481 transported, 19 hanged.

A different approach was taken in Tolpuddle. Farmworkers there met with delegates from the Grand National Consolidated Trades Union (GNCTU) and then founded the Friendly Society of Agricultural Labourers in order to overturn the wage reductions, which were an acute problem in remote parts of southern England, where farmers did not have to compete with the higher wages paid to workers in London or the northern industrial towns. The introduction of mechanisation and a surplus of labour made the situation worse.

The Tolpuddle farm labourers were prepared to stand firm and push Frampton for a living rate of 10 shillings a week. They presented their “perfectly reasonable demands” believing the landowner would have to agree, as they represented a substantial part of the village workforce. The landowners and local magistrates took fright and wrote in 1834 to the Home Secretary, Lord Melbourne, to complain about the union. As there was no law against forming a union (the Combination Acts having been repealed in 1825), the six were arrested and tried at Dorchester Court for breaking an obscure 1797 law, the Mutiny Act, which prohibited the swearing of oaths to stop mutiny at sea. A jury was selected from those most unfriendly to the farm labourers’ cause – landowners and land-renters.

Their stated “crime” was that each had made an oath promising not to reveal the content of their meeting. In fact the martyrs were punished for having the audacity to form a union. Secret oaths undertaken by freemasons in their lodges were common, but secret oaths by workers smacked of revolution to the rulers of the day.

George Loveless observed in their defence, “We have injured no man’s reputation, person or character. We were uniting to preserve ourselves, our wives and our children from utter degradation and starvation.” Summing up, the judge remarked, “If such societies were allowed to exist it would ruin masters, cause a stagnation in trade and destroy property” and “The object of all legal punishment is not altogether with a view of operating on the offenders themselves, it is also for the sake of offering an example and warning.” The Martyrs were sentenced to a maximum sentence of seven years' transportation. Their convict ship took four months to reach Australia, where they worked like serfs in penal settlements, on chain gangs and farms in New South Wales and Tasmania.

The treatment of the Tolpuddle Martyrs triggered huge opposition. In March 1834 over 10,000 people attended a Grand Meeting of the Working Classes called by the Grand National Consolidated Trade Union. On 21 April a vast demonstration assembled near King’s Cross in Copenhagen Fields. 800,000 signatures were collected for their release. Because families of the transported men and other members of the Tolpuddle union were refused parish relief by farm-owning local magistrates, the trade unionist London Dorchester Committee (LDC) collected financial support for the families.

A campaign to take legal action against the Duke of Cumberland (the King’s brother) on the grounds that he took a secret oath as head of the Orange Lodges of Freemasons led to a full pardon from the King in 1836, though they only returned to Britain in 1837. James Hammett returned in 1839. Until 1845 the men leased two tenant farms in Essex out of LDC funds. Only Hammett returned to Tolpuddle working in the building trade. He died in the Dorchester workhouse in 1891.

• The annual Tolpuddle Martyrs Festival starts this year on Friday 14 July in the village of Tolpuddle, Dorset, and finishes on Sunday 16 July. For more detail, see www.tolpuddlemartyrs.org.uk