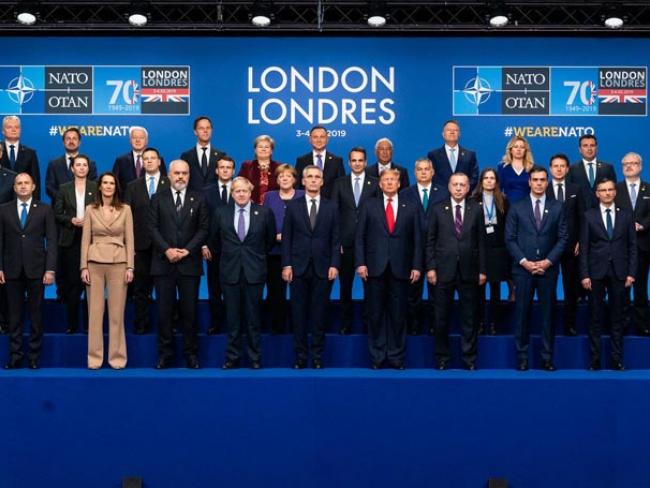 Imperialists united: NATO heads of state at the “celebratory” London summit on 2 December 2019.

NATO has marked its 70th anniversary in London. But for anyone who cares about peace, there was nothing to celebrate. Quite the reverse…

The North Atlantic Treaty Organization originated with the Washington Treaty of 4 April 1949, but the ideas that gave rise to it go back to the final months of the Second World War, when the Red Army was demolishing the Nazi war machine. Through Swedish channels, Himmler and Goering sued for peace urging Britain and the US to unite with Germany to fight the “real” enemy, the USSR.

Churchill was also concerned at the pace of the Red Army’s advance, and instructed his military planners to come up with a plan to attack the Red Army on 1 July 1945. The plan, named “Operation Unthinkable” and dated 22 May 1945, proposed to retake eastern Germany and Poland through a two-pronged attack on Stettin and Poznan with 47 divisions including 14 tank divisions.

The plan’s primary goal was “to impose upon Russia the will of the United States and the British Empire”. It envisaged using 100,000 German Wehrmacht prisoners of war and concluded, “If we are to embark on war with Russia, we must be prepared to be committed to a total war, which would be both long and costly”.

But at the war’s end, bankrupt Britain was in no position to call the tune. The USA emerged as the new world power with a mighty navy and surging economy due to the war, and had priorities outside Europe.

The very existence of the Soviet Union was a continued affront to imperialism. Hence the formation of NATO in April 1949 to “contain” the Soviet Union, and put what remained of Europe’s military assets firmly under US control.

With Britain, Iceland, Norway, and Italy among NATO’s members providing the US with bases, the US dominated the North Atlantic and the Mediterranean. The admission of Greece and Turkey into NATO allowed the US to start its encirclement of the Soviet Union.

Once formed, NATO moved swiftly. Its first act was to create West Germany on 23 May 1949 from the NATO-occupied zones of Nazi Germany. The German Democratic Republic (GDR) was set up in the Soviet-occupied zone months later as a response, although the Soviet Union called for a united, neutral, disarmed  and democratic Germany.

By 1955 the US was in a military alliance with a country which it had been fighting only ten years earlier. West Germany was rearmed with US aid, its army (Bundeswehr) was established, and it was enlisted into NATO, vowing to reclaim “lost territories”.

Responding to this threat, the GDR and Poland initiated the Warsaw Pact, the military alliance of Comecon – the socialist economic community – on 1 May 1955. NATO was now the armed wing of capitalism set against the socialist Soviet Union and its allies.

The US and NATO escalated military spending and embargoed the sale of a range of technical products to the Soviet Union, forcing them to waste huge resources on developing high tech weaponry. The US introduced nuclear missiles, targeting the Soviet Union, in bases from South Korea through Canada and the US to NATO European countries.

Similar military alliances to NATO were created to complete the encirclement of the Soviet Union and also China. The Baghdad Pact linked the US, Britain, Turkey, Iraq, Iran and Pakistan but was dealt a severe blow when the Iraqi monarchy was overthrown in 1958 and then a death blow when the Iranian Shah was overthrown. SEATO brought together US allies in South East Asia, but internal bickering and the Vietnam War ended that.

With the collapse of the Soviet Union in 1991, the Warsaw Pact was dissolved. It may have been assumed that NATO would act similarly. Instead, the lie that NATO had kept the peace in Europe was exposed.

NATO took the fall of the Soviet Union as an opportunity to expand. Most of Eastern Europe was gobbled up and then required to join the EU on its terms, their industries privatised and taken over by EU and US companies.

Some stood up to this, particularly Belarus and Yugoslavia, the latter paying a heavy price, being bombed by NATO and seeing Warsaw Pact military hardware channelled to Croatia to hasten the break-up of the country.

The Serbian Province of Kosovo was occupied by NATO and remains a NATO/EU colony hosting the biggest US base, Camp Bondsteel, in the Balkans, the others being in Bosnia, Romania and Bulgaria. The base houses a detention centre described by the Human Rights envoy of the Council of Europe as “a smaller version of Guantanamo Bay”.

Over October 2001, NATO attacked Afghanistan, marking the start of a war without end, and in 2003 some NATO forces, though not under NATO control, invaded Iraq. France had vigorously opposed attacking Iraq and this marked the beginning of a number of splits in NATO.

Meanwhile the US-led alliance was busy engineering the “Orange” revolution in Ukraine, the “Rose” revolution in Georgia and the “Tulip” revolution in Kyrgyzstan with the intention of incorporating them into NATO and establishing military bases there. And, of course, NATO bombed Libya to oust Gadaffi – creating a haven for people traffickers and Islamist terrorists in the process.

This, then, is the organisation whose 70th birthday was celebrated in December 2019 in London. So what is NATO today? As it casts around for a new role with the US political system divided and the Eurozone in turmoil, the only thing that is clear is that nothing good will come out of NATO.

A spanner in the works of the EU war machine
EU and NATO ramp up tension with Russia
NATO’s Polish war games
NATO intervention and the growth of terrorism
Ukraine: the real violators