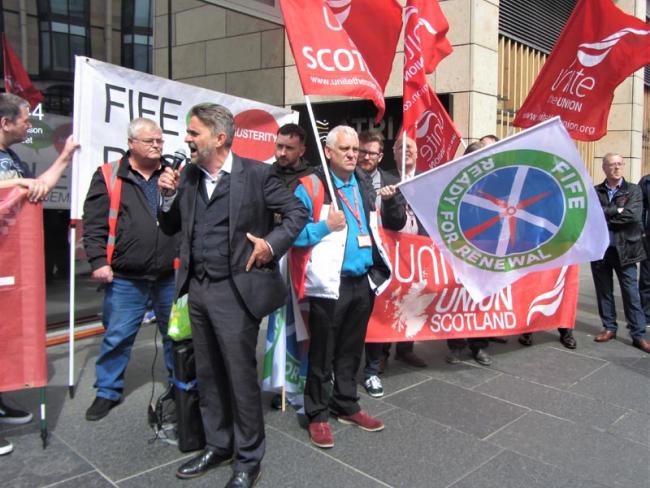 Workers from the BiFab construction yards in Fife protested today (Friday) at the head office of the energy giant EDF in Edinburgh. Some 500 jobs at the yards are under threat after orders for new work were placed abroad.

Commenting on the refusal of EDF to attend a mass meeting in Buckhaven, Scottish TUC Deputy General Secretary Dave Moxham said: “We warned EDF – if you won’t come to us, we’ll come to you. We need this work in Fife. If we don't get the work into these yards we could lose the industry.”

Tam Kirby, Chair of Fife Trades Union Council, commenting on EDF refusing to accept a protest letter by locking the front doors, said the letter expressed the anger of the workers and community that the work for the renewable energy industry could be transferred to Indonesia while “the yards are sitting here empty, more than capable of doing the work.”

The workers dealt with the locked doors by quickly marching to the rear entrance, where they gained access and delivered the letter. EU rules against state aid have led to several months of inaction.