Britain needs coal. Why can’t it be British coal?* UK Coal announced in April that it is to close its last remaining two deep mines, at Kellingley in Yorkshire and Thoresby in Nottinghamshire, with the loss of 2,000 jobs. That decision highlights the whole issue of energy security for tomorrow’s Britain.

The economic assets of state-owned British Coal remaining after the government’s closure programme were privatised in 1994. The English mining operations were merged with RJB Mining to form UK Coal plc. At that time only 15 pits remained in production. Today UK Coal’s operations are reduced to Kellingley and Thoresby deep pits plus six opencast mines: Potland Burn and Butterwell in Northumberland, Park Wall North in Country Durham, Lodge House in Derbyshire, Huntingdon Lane in Shropshire and Minorca, near Measham in Leicestershire.

‘Neither Russian gas nor gas from the Middle East is a guarantee of energy security.’

UK Coal has been on the brink of insolvency for some time; it has desperately but unsuccessfully tried to find a buyer for the company. It required investment to the tune of £60 million but ended up begging the government for a subsidy to avoid immediate collapse. It got a loan of £10 million from the government and a further loan of £5 million each from two private companies: Hargreaves Services, which transport UK Coal’s product, and Harworth Estates, 25 per cent owned by UK Coal.

The purpose of those loans is not to invest, but to enable a “managed closure programme” leading to the total closure of both pits by the autumn of next year. This potentially sounds the death knell for the British coal industry, not just deep mines but opencast as well. UK Coal does not have the resources to rehabilitate the opencast sites after they are exhausted.

Without a British coal industry, those power stations remaining open will rely on imported coal, mainly from Russia, Colombia and the USA. US coal mining companies are looking for new markets and are targeting Britain because of the US success in developing fracking as a source of energy. Russia already supplies over 40 per cent of Britain’s steam coal needs.

There is a bigger problem than dependency on imported coal. About 40 per cent of Britain’s electricity is generated by coal-fired power stations. Because of EU regulations a third of them will be forced to close by 2016 with the remainder closing by 2018. The shortfall in energy generation that would result from the elimination of coal-fired generation capacity is a potential crisis for Britain.

The industry’s main trade unions and the TUC have been advocating carbon capture and storage (CCS) as a solution. Britain is further down the road of developing this technology than any other nation, with the possible exception of China. The trade unions recognised this emerging crisis early on. Unite, which represents workers in coal fired power stations and open cast mines, and the National Union of Mineworkers, representing miners in the deep pits, have worked jointly to support the development of CCS. They have set up the Coal Combine, representing union stewards across the industry, to campaign for it.

What exactly is CCS? It is a technology-driven process that enables emissions from industrial plants such as power stations to be captured and stored permanently underground. That’s instead of being released into the atmosphere as happens now at conventional fossil fuel-fired power stations.

However, CCS is still in the process of development. The EU has set aside up to two billion euros to develop this technology. One of the trials, known as the White Rose Project is being planned for the Drax power station site near Selby in Yorkshire. The companies involved, Alstom, Drax and BOC, along with Unite are in negotiations with the government seeking its support for the scheme. To access EU funding, the national government must support the project and show a commitment to its further development.

Following lobbying from the unions through the Coal Combine, the government is at last waking up to the threat to energy security. In mid-April news came that the government has told the EU it will support the Drax project. This means that the EU is expected to agree funding of 300 million euros in July. 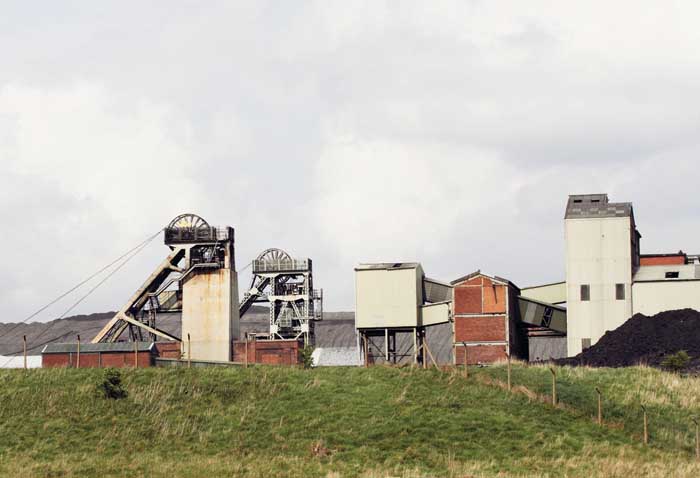 The new plant will be a state-of-the-art, coal-fired power plant equipped with full carbon capture and storage technology. This project is intended to prove CCS technology on a commercial scale and demonstrate it as a form of low-carbon power generation. It will capture around 2 million tonnes of carbon dioxide a year. That will be pumped along a pipeline out into the North Sea and stored deep under the seabed.

Another aspect of this project is that the transportation for the emissions can be shared with manufacturing industries using the same technology. If the trials are successful it is expected that other power plants would be built on the sites of existing plants in the region, Britain’s most energy-intensive area. New plants would be able to share a grid of pipelines taking the CO2 to be stored under the seabed.

CCS, also known as Clean Coal, is the only technology that could maintain coal-fired power generation in Britain beyond 2018. But that would require supplies of coal. Instead of closing pits, some of the other British pits that have been mothballed would have to reopen. The alternative would be dependence on imported coal, as much a sacrifice of Britain’s energy security as inadequate generating capacity. Britain would have no control over the price of coal and we would be at the mercy of foreign coal producers.

In 2012, British coal production fell to an all-time low of 17 million tonnes. Yet due to the high price of gas the amount of coal used for electricity generation increased to its highest level since 2006. An extra 12 million tonnes of coal were imported to fill the gap.

Russia has long been Britain’s main source of imported steam coal used to generate electricity. By 2012 44 per cent of all steam coal burnt in British power plants came from Russia. In more recent years, steam coal has also been imported from Colombia and the USA. Coking coal is imported too, 47 per cent from Australia and 38 per cent from the USA.

Gas is no answer in the long term. Britain’s North Sea reserves are dwindling; Norwegian gas production has fallen as well. As a consequence gas imports are increasing. At present 15 per cent of the supply is liquefied natural gas imported from Qatar. Around 45 per cent of our natural gas was imported in 2009; this is expected to rise to 70 per cent by 2019. This year Russian natural gas will start to arrive in Britain.

Neither Russian gas nor gas from the Middle East is a guarantee of energy security. The leaders of the coup in Ukraine are telling European countries receiving Russian gas through their territory that the supply may not continue. They threaten to stop imports of Russian gas to western Europe and to turn supplies off until a price can be agreed with Russia. Ukraine claims to have three months-worth of gas stored, but other European countries will suffer shortages.

Unions in the Coal Combine have taken control of the situation, recognising the threat to Britain from this looming energy security crisis. They have launched their campaign to support the use of Clean Coal despite the threat of pit and power station closures, and in the case of the NUM the prospect of extermination.

The Coal Combine’s objectives are to:

The political clarity and vision shown by the leadership of these workers is in complete contrast to the actions of politicians from all parliamentary parties. By recognising the possibilities that CCS offers and deciding to fight for it, workers in the industry have made a contribution on behalf of the whole working class.

Reopening pits, maintaining generating capacity, creating energy security in a nation built on coal, supporting manufacturing and leading the world in this technology are not idle wishes. All of this is possible even at a time when the United Nations is calling on member states to reduce their carbon emissions. Whilst the government drags its feet and the opposition remains silent, it has taken organised labour to put these possibilities on the agenda.

Perhaps thirty years on from the miners’ strike the government doesn’t trust workers with control over our own British energy resources. Perhaps they prefer the illusory security of multi-billionaire Qatari despots and Russian oligarchs. That’s why the fight for energy security is a class issue. British capitalism likes to pretend that it doesn’t need British workers, whether it turns to outsourcing manufacture to foreign countries, mass immigration or automation. But as so often in the past, it turns out workers know best.

‘The government doesn’t trust workers with control over our own British energy resources.’

The Green brigade despise coal, oil, fracking and nuclear power and want a land full of EU-subsidised windmills. They have little vision beyond that and don’t see a future for Britain as a manufacturing nation. With dwindling North Sea oil supplies, a combination of clean coal, fracking and nuclear power could potentially see Britain on its way to becoming self sufficient in its energy supplies, free of EU interference too.

One question needs to be asked: how has capitalism created this situation? Energy prices have gone through the roof, many workers cannot afford heating and lighting, and at the same time we are facing the prospect of the lights going out in a couple of years. That does not make any sense. We can be confident of one thing: the workers in the industry know what to fight for. With this first victory on CCS, they will fight the closure of the two pits and seek to reopen others. ■

* The headline repeats the slogan that’s part of the NUM’s campaign to keep Kellingley Colliery – the ‘Big K’ of the great strike of 1984/85 – open.

For further information, including updates on Kellingley and Thoresby, see the NUM website, www.num.org.uk