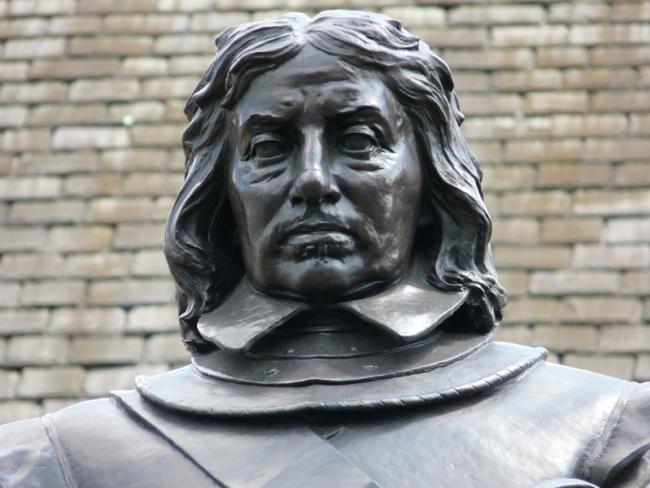 Detail from the statue of Oliver Cromwell by Sir William Hamo Thornycroft RA, unveiled outside the House of Commons on 31 October 1899. Photo Loz Pycock (CC-BY-SA 2.0).

A war unique in our history: a remaking of our country was fought not only on the field of war but also in people’s hearts and minds…

There have been power struggles before and since among rich elites or between rival aristocratic houses. The English Civil War was entirely different, actively involving whole swathes of society normally excluded from control.

In England, Charles I’s reign witnessed rising discontent almost from his succession in 1625. Costly, failed wars led to inflation and taxation. Religious reforms were unpopular and seen as taking the country towards Catholicism. And there was an underlying sense that the country was not being ruled in the best interests of its people.

In 1640 Charles summoned parliament. He was bankrupt, but wanted to raise an army to suppress opposition in Scotland, where he was equally unpopular. The House of Commons in the Long Parliament (as it became known) represented a cross-section of the ruling class establishment: gentry, merchants, lawyers. But almost for the first time in English history, elections were contested on political issues.

The real strength of those opposed to the king in the House of Commons came from outside parliament, across a wide cross-section of society. Generally support for parliament came from the economically advanced south and east of England, whereas the king’s support came from the economically backward areas of the north and west. In Yorkshire, Lancashire and Sussex, there was a clear division between parliamentarian, rebellious industrial areas and royalist agricultural areas.

There is no simple reason why opposition to the king and his ministers moved from protest to armed revolt in the First Civil War (1642-46). It is likely that popular discontent over a range of different political and religious issues produced such a heady and powerful mix that trust in the king and his government totally collapsed. The “humble respect and awful reverence which is usually given to nobility, gentry and clergy”, as Edward Chamberlayne put it in 1672, crumbled in these tumultuous times.

In November 1641 parliament passed the “Grand Remonstrance” setting out their many grievances against Charles. The king’s next move was disastrous and prompted open revolt. He went to parliament with a body of soldiers intending to arrest the five leading members of the parliamentary opposition. Warned beforehand, they had left the Commons by the time Charles arrived. The king’s bungled attempt at a coup made them heroes.

King Charles left London and shortly began to raise an army against the rebellious parliament. In turn, parliament decreed that they did not require Royal Assent to make laws, taking control of local militias and a growing volunteer army. And so in 1642 war began.

Dissatisfaction about the conduct of the war led Oliver Cromwell setting up the New Model Army in 1645. Its composition was unusual, including a broad cross-section of society in contrast to armies elsewhere at that time. The broader social origins of its soldiers provided literate, argumentative soldiers with easy links to friends in civilian political movements.

The first armies of both sides had been formed largely of volunteers. Although diluted by conscription from the second year of the war, this sense of fighting for a cause they believed in remained a strong factor amongst parliamentary armies, and was transferred to the New Model Army.

The New Model Army was disciplined and well organised, averse to looting. Quite soon promotions to officer rank were on merit rather than social rank. It took a major political battle in parliament to ensure acceptance of these forms of military organisation.

Parliamentarian forces eventually gained the upper hand and in May 1646 Charles surrendered to the Scottish army. He was handed over to parliament when the Scots withdrew from England in January 1647.

In April 1647 parliament tried to disband the New Model Army but failed. Soldiers refused to disband. After months of dispute with parliament, they declared, “We were not a mere mercenary army” and would not disband without settlement of both their own grievances (including arrears of pay) and the people’s political and religious liberties.

In June 1647 a troop of 500 cavalry seized the king and brought him to Newmarket where the rest of the army was. In August the army occupied London. That October the Council of the Army, with representatives of the rank and file as well as officers, debated the settlement of the kingdom, known as the Putney Debates. They even discussed An Agreement of the People, a manifesto produced by radical Levellers.

The escape of Charles from detention brought the debates to an end and opened the Second Civil War. The New Model Army had to put down scattered mutinies and then fight a Scots army enlisted to support Charles. That was defeated in August 1648, ending the war.

Charles I was put on trial in January 1649. Condemned as a “tyrant, traitor, murderer, and public enemy to the good people of this nation”, he was executed on 30 January. The office of king was formally abolished on 17 March.

After the Putney debates the heyday was over for the Leveller cause. The momentum of the republican side veered towards the wealthy, anxious to protect the interests of property. Gradually the New Model Army became ever more a professional body and the days of sermons, lectures, leaflets, agitators and citizens in uniform passed.

The Levellers, Diggers and Ranters disappeared from view and lost their impact on the public arena. But the English people’s view of the world had changed forever.

Capital vs. workers
Devolution – a failed idea from a failed era
Let's get on with leaving
The NHS at 70: all to play for
The great betrayal? Don’t let the EU steal our fish