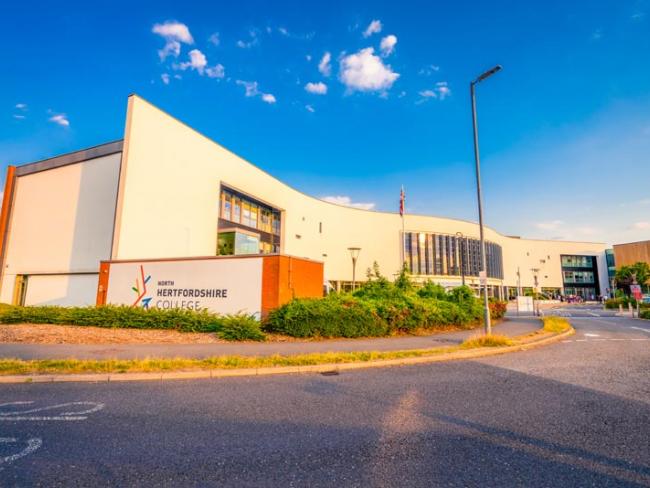 North Hertfordshire College: a fine facade, but the college has seen a fall in apprenticeships and revealed a massive shortfall of £5 million in January – despite being rated as “good” by Ofsted. Photo Pajor Pawel/shutterstock.com.

With a new prime minister saying we will leave the EU by 31 October at the latest, those who work in further education must seize the opportunity to say what is needed – and to demand it happens…

Since Britain’s vote to leave the European Union over three years ago, the government should have been planning urgently to provide the education, skills and training that the country needs for independence in the 21st century.

Yet further education has been sorely neglected since well before 2016. Governments and employers have consistently disregarded the importance of Britain’s history in technological and skills development.

And the era of “austerity” – the massive cuts to public services since 2010 – has affected FE even more acutely than most other education sectors.

The truth is that FE is in crisis, in no fit state to match up to what is needed.

A report on education spending from the Institute of Fiscal Studies in 2018 found that despite greater participation in education by 16- to 18-year-olds since the 1980s, spending per student has dropped dramatically.

On top of this, the universal Educational Maintenance Allowance, designed to keep 16-18 year-olds in education or training, became in 2011/12 a bursary payable only to students in households on very low incomes.

And the number of adult learners in FE has slumped by around half, along with a 45 per cent drop in funding. Chances to gain new skills for adults are greatly diminished.

Apprenticeships accounted for a third of the £2.3 billion government spend in 2017/18. It is widely recognised that the scheme is open to abuse and low-quality placements: young people taken on as “apprentices” only to be replaced by a new student when their funding period runs out; employers using the government funding to subsidise their own already existing apprenticeship schemes. And the number of lower level apprenticeships on offer dropped by 27 per cent after the imposition of a training levy on larger employers.

England’s 200 further education colleges are struggling. The Augar review, headed by a banking expert, detailed the crumbling state of vocational and technical training in the sector. It called for urgent action to reverse the cuts in funding and enrolment, with an immediate injection of £1 billion.

An article in the Financial Times in June illustrated the crisis with some case studies, including Croydon and East London.

Encouraged by government, Croydon College in South London took on extra borrowing to expand its buildings, finished in 2011. Since then, the college’s income has dropped by a third due to funding cuts, and it has been forced to sell off buildings in order to service its £10 million debt.

Costs have risen and funding to pay for students and staff has decreased sharply. College principal Caireen Mitchell says that with a budget of £25.5 million they will have a deficit of £250,000 this year, which means they are unable to offer additional courses in the evenings – they can’t afford to open.

In East London six FE colleges have merged into the New City College to save money, but the college has still had to sell long leases on its Poplar site to commercial developers to stay afloat.

The situation hasn’t been helped by a law change this year which makes it easier for banks to seize assets of colleges in debt. And the college has had its government funding for students staying on for a third year of college cut by 17 per cent.

The picture of cuts and decay is not limited to England. The SNP-dominated Scottish parliament cut funding to FE colleges, resulting in a loss of 120,000 student places by 2015. The Welsh government reduced FE funding by £26 million in 2014-15 alone, on top of cuts of £65 million in previous years.

What about the specialist skills needed for industry? Bridgewater and Taunton College in South West England has tried to plan for the need for future skills in the area by developing specialist courses, with training materials, for Hinkley Point power station nearby. But after several years it has only just started to receive income from the work done.

Such work should be funded by government and the industry if they are serious about developing the sector for Britain’s future energy needs. In spite of the strong noises about skills in the government’s Industrial Strategy, published over a year ago, it has disappeared without trace.

Some employers such as Rolls Royce (opening its new training centre in East Grinstead) and Dyson (with its own Institute of Technology in Malmesbury) are working to develop the skills they need.

But many employers have been more than ready to complain about skills shortages while showing a marked reluctance to take any responsibility for the training and education of a British workforce themselves. Theirs are among the strident voices calling for the continuation of the ability, granted by the EU, to import skilled workers from abroad.

The employers organisation the Confederation of British Industry harps on about what a disaster leaving the EU will be, echoed shamelessly by the Trades Union Congress – which claims to be the voice of British workers.

We see the result of this policy in the dire shortages of medical staff in the NHS. Training for our needs here is a central requirement for an independent future. So much easier to poach workers from abroad, and save the costs of training yourself, especially when the workers often come more cheaply!

‘Casualisation is central to FE’s decline…’

With free movement of labour inside the EU and the general failure to control immigration from outside, and the government promoting the rights of employers over the needs of the whole country, it’s no wonder that the health of the further education sector has been given low priority.

Strangely, the Universities and College Union (UCU), which organises some FE workers, takes a pro-EU stance, calling for a second referendum – despite the damaging effects of EU rules for its members in FE, and indeed in the universities.

The pay and conditions of higher education workers have declined, but in FE they are appalling. Teachers in FE are paid on average £7,000 a year less than in secondary schools, making it difficult to recruit – especially from skilled professionals like engineers and electricians. How can these skills be passed on to a new generation of professionals?

While people acknowledge the horrors of the “gig” economy – casualisation, zero hours contracts, fragmentation of work, deskilling – they often don’t think of it being widespread in FE colleges.

Yet casualisation is central to FE’s decline. According to a report by the UCU published in 2017, almost 30 per cent of the workforce in the sector is employed on “insecure or precarious contracts”, with two-thirds of them on hourly-paid contracts.  In 19 colleges more than half of all staff were on insecure contracts.

The college employers’ Association of Colleges shows a woeful failure to recognise that Brexit will be a godsend: the opportunity for colleges to expand. Its website rues the possible removal of the freedom to recruit low-skilled workers from the EU. “We want people in our sector who work for love as well as money,” it has the nerve to say.

While UCU supports action by its members like that in Bradford and Nottingham colleges recently, it and the other education unions have not yet welcomed the great opportunities which Brexit brings to reinvigorate the sector, to demand from government the funding and priority FE needs to be given. They should be planning to do so now.