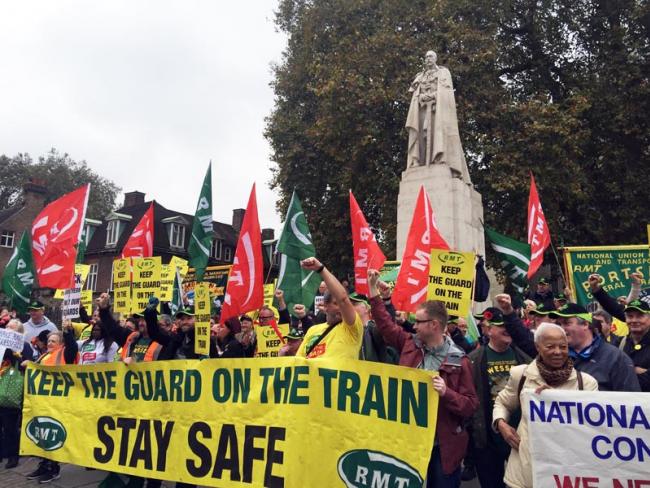 West Midlands Trains runs services around Birmingham as well as on the West Coast Main Line between Liverpool and Euston. After several days of solid strikes boosted by the refusal of many Aslef drivers to cross picket lines, the company has caved in with an offer that allowed the RMT on 5 December to suspend action and ballot its members on the deal.

The battleground has now shifted to South Western Railway, where RMT guards and drivers took strike action for most of December. SWR runs services out of London Waterloo covering south west London, and running to Portsmouth, Southampton and Exeter.

SWR has so far taken a hard line, enabled and encouraged by the government, which so far has compensated the company to the tune of £86 million  for losses incurred from the industrial action, according to parliamentary answers and rail bosses’ reports to investors.

RMT General Secretary Mick Cash slammed Secretary of State for Transport Grant Shapps for engineering the month-long strike for blatant political purposes. “Fat cat rail bosses won’t lose a penny and have no incentive to settle. This is an astonishing political intervention by the government during the general election that deliberately politicises and prolongs this dispute,” he said.

As the government has made it harder and harder for trade unions to take industrial action, the RMT is now forced under the 2016 Trade Union Act to re-ballot members to confirm that they support continuing industrial action. This will be the sixth ballot.

And transport unions face further hurdles. The first announcement from newly elected Prime Minister Johnson was that he will “ban all out strikes on the railways”, forcing unions to run a minimum service in disputes.