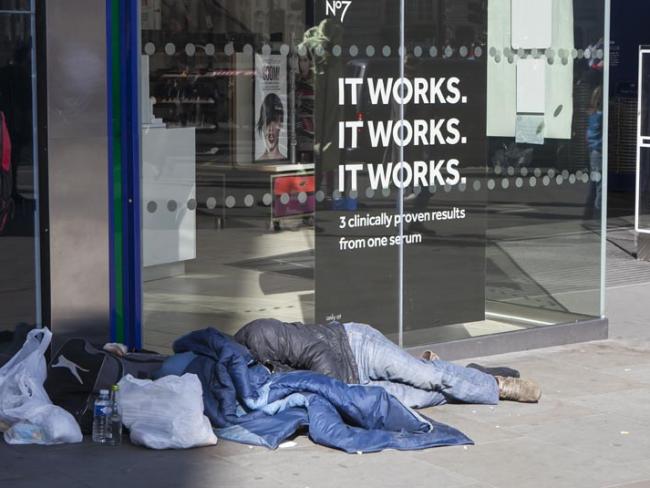 Just days after the death of Gyula Remes, the second rough sleeper to die outside parliament this year, the Office for National Statistics revealed that nearly 600 homeless people died on the streets or in temporary accommodation in England and Wales in 2017, up 24 per cent in just five years.

Like much in Britain, homelessness is spiralling out of control – fuelled by governments’ deliberate creation of homelessness through a combination of unemployment and untrammelled migration – in short, with its anti-people policies that make housing increasingly expensive while squeezing incomes.

The Local Government Association’s Martin Tett said that proper council funding was “essential if we are going to end rising homelessness,” while Greg Beales from Shelter blamed a “crippling shortage of social housing and a threadbare safety net,” and called on the government “to make this year a turning point in the fight to ensure that there is a safe home for all those who need it.”

Pledges but no money

But the government clearly has no intention of asserting control over housing. For example, it pledged in October that local authorities would hold serious case reviews to look into the deaths of homeless people, but has so far provided no funding or support for this work.

Analysis from the Guardian and homeless charity Shelter published at the start of this year found that English councils spent £997 million on temporary accommodation in 2017/18, up 71 per cent in just five years from £584 million in 2012/13.

Greg Beales from Shelter said that increases in homelessness and temporary accommodation spending were “just some of the unwanted consequences of welfare cuts, rising rents and a failure to build social homes,” while landlords “charge desperate councils over the odds for some of the least suitable and worst places for homeless families to live, like emergency B&Bs.”

The analysis found that Hackney spent the most, £208 per head of population, on temporary accommodation, with London councils spending the most overall, while Luton, Brighton and Hove, Milton Keynes, Manchester,Peterborough andBirmingham all spent more than the national average of £18 per head.

The reverse side of the dire shortage of housing is the collapse of housebuilding, with levels by the end of the 2010s set to be the lowest of any decade since the Second World War. Research by the Centre of Policy Studies published on 1 January found a 50-year pattern in which each decade has had fewer new homes than the last, and in the 2010s, the new-build construction rate plummeted to one for every 43 people.

And while Labour blames Conservative policies, it is clear that for the past 50 years all the parliamentary parties have played their part in creating the crisis.

“…part of a pattern stretching back half a century”

The Centre’s director, Robert Colvile, said: “The housing crisis is blighting a generation. But as this analysis shows, this is not just the consequence of the financial crisis – it is part of a pattern stretching back half a century. Ministers need to take bold action to ensure the 2020s are the decade in which we break this cycle."

And on top of nearly decade-long “austerity”, new proposals for local authority funding are looming, under most people’s radar. The Institute for Fiscal Studies warned just before Christmas that councils will have to cut more services once new arrangements to make them more financially independent come into force, unless extra funding is allocated.

Councils will keep 75 per cent of business rates from 2020, but will lose revenue support and other central government grants, but Paul Johnson, director of the IFS, said: “Plans for councils to rely much more on just council tax and business rates are not compatible with growing social care needs. Even with big increases in council tax revenues, [they] can't keep up with spending needs. Councils will need other sources of funding.”