Impromptu march brings democracy to the streets of London 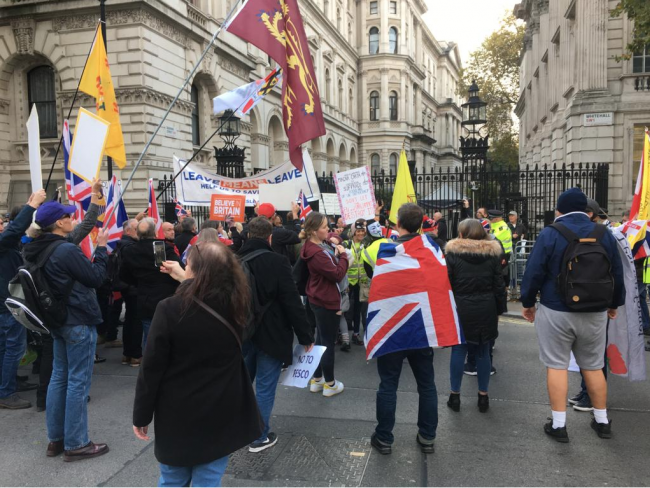 Marchers showing what they think outside Downing Street on 31 October. Photo Workers.

With nothing to celebrate about 31 October, the planned official Brexit rally in Parliament Square in London did not go ahead. Instead, hundreds of demonstrators chose to arrive with their home-made banners to stand opposite parliament to make their feelings felt.

And then some more arrived. And some more. Then with great efficiency some of the demonstrators organised themselves into a march formation and took off, first to the media circus tents outside Westminster and then around Parliament Square, down past Downing Street and onwards to Trafalgar Square.

Many of the demonstrators were live streaming the event on their mobile phones and calling on others to come and join the demonstration. They then decided to march the route again, and then again with increasing numbers each time, as Brexiteer Londoners came to join the groups who had arrived from different parts of the country.

The main slogan was the predictable “What do we want? Brexit Now! And what else do we want? Democracy Now!” Other slogans included “The people are sovereign, not parliament”.

The many police who are now always around parliament had little option but to facilitate the impromptu demonstration.

In time as the march grew they did become anxious about the way it stopped outside Downing Street to allow demonstrators to vent feelings on what they called “the rotten deal”, and mounted police were enlisted to cover the Downing Street entrance.

Despite the proximity of the media tents at Westminster no footage of the extremely noisy demonstration managed to make the news bulletins.

When the noise levels permitted many of the demonstrators were deep in conversation about how we needed to organise ourselves constituency by constituency in the General Election so as not to split the vote to leave the EU. The politicians may not be able to agree a Leave alliance, but the people seem to be planning one anyway.

Late in the afternoon, in a provocative move, the Liberal Democrat Party drove a van with a giant electronic hoarding on it with the slogan “Stop Brexit! The future is Jo Swinson” alongside parliament – an indicator of their planned tactics in the election battle ahead.

But the van was swiftly surrounded, and the police instructed the driver to switch off the electronic display. The vehicle was unable to proceed along Parliament Square as the demonstrators just stayed in the road. Eventually, with police assistance, the blacked-out vehicle was reversed and sent off over Westminster Bridge to great cheers.