On the march towards a European army 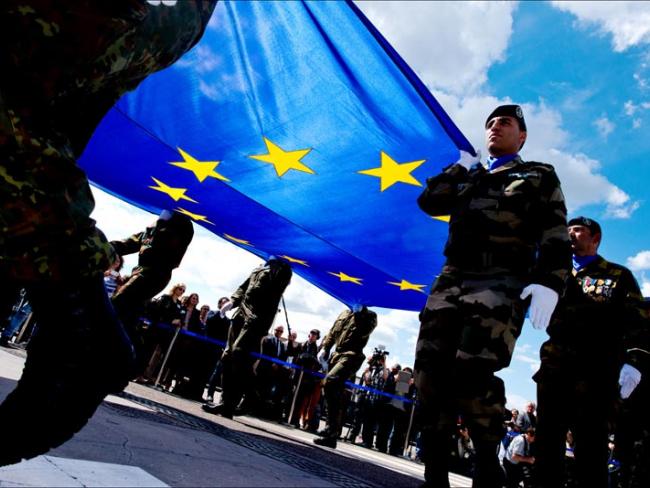 Since our vote to Leave, the EU establishment has moved rapidly towards setting up an EU army with a single central command, without any national, democratic controls. Given the EU’s aggression in the past – look at Kosovo, Ukraine, and the bellicose stance against Russia – this is a dangerous development. It would give the EU, acting as a bloc, a free hand to beat the drums of war where it chooses in the world.

Our governments act aggressively too, of course. But they are subject to control by the people, when we choose to exercise it. Brexit should bring increasing awareness and exercise of our power to do so.

Before the referendum, EU supporters told us that claims from the Leave side about moves to unify Europe’s armed forces “are nothing more than fantasy”, as Guardian columnist Jennifer Rankin put it on 27 May 2016. Lord Ashdown said the idea of an EU army was “nonsense”.

During the campaign the European Commission kept quiet about defence. It was under strict instructions not to do or say anything that could have helped the Leave vote. Once the voting was over, the EU showed its true intent.

Germany’s Defence Minister, Ursula von der Leyen, took the opportunity to make things clear in September 2016 during a visit to Lithuania – which now houses a German battle group of around 1,000 troops. “It’s time to move forward to a European defence union, which is basically a ‘Schengen of defence’,” she said.

The EU is pursuing all this to expand “EU sovereignty” – President Juncker’s words – across defence, which was the EU’s ambition from the start.

Political problems, not least the flat refusal of British public opinion to countenance the absorption of British armed forces into a Euro Army, stalled the project for decades. Brexit has cleared this objection.

The EU plans to integrate member states’ militaries into joint EU units by triggering something called Permanent Structured Cooperation, or PESCO for short. In June 2017 the European Council called for it to be “inclusive and ambitious”. The Commission is frank about its aims: “PESCO is both a permanent framework for closer cooperation and a structured process to gradually deepen defence cooperation within the Union framework.”

The European Defence Agency, an arm of the European Commission, is pushing “a European defence research programme to start when the current funding programme ends in 2020”. It’s talking about a budget of some €500 million which “… would place the EU among the top 4 of defence research & technology investors in Europe” – omitting that as a result most member states would have to give up their own defence research.

What has all this to do with us, given we have decided to leave the EU? Well, the EU is desperate to seize control of our military assets. Britain accounts for a fifth of the EU’s total defence spending. The EU wants us to pay for a close association with EU defence.

Britain’s defence research spending is about £1.8 billion a year. We are the leading defence research power in Europe with the highest level of defence research related exports. This is due not to the European Defence Agency but to our long history of defence research, military spending and scientific excellence. The EDA currently has a budget of just £27 million, of which Britain pays the second highest amount, more than a tenth of its budget.

The EU Parliament, in its November Defence Union report, said that the EU’s Common Security and Defence Policy “should lead in due time to the establishment of the European Armed Forces”. Various bodies are being brought into action to make this a reality. The EU’s External Action Service has also produced its own Security and Defence Implementation Plan with the aim of tying EU defence capabilities to its foreign policy.

The EU sees the close connection between defence supply and defence policy – and wants to make it even closer. The European Defence Action Plan aims to make a European military a reality with a €5 billion target for defence spending, a €500 million target for spending on military R&D, a single market for defence, defence industry rationalisation, joint capabilities held at EU level, and EU engagement in security of supply (which implies intervention abroad).

The May government approved these two plans at EU Council meetings in late 2016. The EU Commission has told the government that because “decisions over EU Defence Union were taken unanimously”, Britain is expected to “play its full role while it remains a member”.

The Foreign Office, in its Strategic Defence and Security Review of December 2016, proposed “continued UK involvement in EU Common Security and Defence Policy”. Foreign Office minister Alan Duncan told MPs on the European Scrutiny Committee there was “support from other EU states for UK engagement in EU defence policy after Brexit” and he wanted to “avoid hampering such future cooperation”.

But there has been deep opposition here, and at the EU Council meeting on 13 November the government dramatically drew back from its previous consent to EU military schemes by refusing to enter the EU’s PESCO military union agreement.

“It should lead to the establishment of the European Armed Forces.”

The new EU Defence Fund is to be supported by billions of euros from the  EU’s European Investment Bank. Britain is the joint-largest shareholder in the bank, so the EU is aiming to offer our own money to British firms to join EU-led procurement projects, giving these firms a financial incentive to demand involvement in the EU’s “defence single market”.

The EU’s drive to integration has built-in “mission creep”. Signing up to any part of industrial, technological or strategic cooperation involves being bound into EU military planning for a common EU defence, and drawn into contributing to EU defence funds.

EU military integration, a single EU foreign and security policy, along with an EU treasury with a single budget and a single all-EU currency, all add up to a single EU state.

Now we have decided to leave the EU, we should stay outside its defence schemes and should certainly not engage with them as a sweetener for the negotiations.
In the interest of peace, we must maintain exclusive control of our armed forces, and redirect the away from aggression and towards defence. With our fishing grounds to protect and facing new enemies in the world because we have struck out for independence, they will have plenty of defending to do.

Labour: a corpse in need of burial, not resuscitation
Welsh seafarers call for jobs, training and a future
The weakness at the heart of the EU
A 'more perfect' union?
An independent Britain - it's only rational