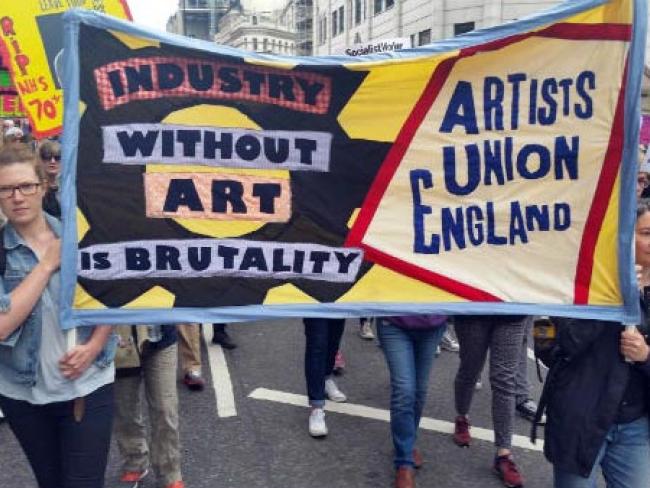 Visual and applied artists have been getting organised. The Artists’ Union of England, launched in London and Newcastle two years ago with advice based on the Scottish Artists’ Union Rule Book, has just been granted certification. This enables the new union to affiliate to the wider trade union movement, in particular other creative, cultural and educational unions such as BECTU, the Musicians’ Union, Actors Equity, PCS, universities union UCU, and Visual Artists Ireland.

Capitalism’s punitive crisis economics has created a growing awareness of exploitation among artists, who are no longer prepared to have their expensive training go unrecognised or contracts reneged on. The new union can now begin to build branches and train reps to help combat an increasing culture of low pay, zero hours contracts, unpaid residencies and volunteering – all culminating in retirement without a pension or savings to fall back on.

As access to costly fine arts courses becomes more exclusive, and local authority funding comes under attack, artists have begun disappearing from public life, in education, in the community, in galleries and as visiting lecturers. The new English Baccalaureate has resulted in a fall of 46,000 in entries for arts subjects at GCSE level between 2015 and 2016.

Painters and sculptors, illustrators and potters, tend to work in isolation, and as “self-employed” individuals they are particularly exposed to the power of employers. It’s reckoned that artists are 20 per cent worse off in 2016 than in 2008. Poverty and soaring rents are forcing them to give up their studios.

No wonder artists are wondering how is it that an arts festival can be awarded a £30,000 grant of public money, yet pay an artist a mere £50 for a commission. They are calling on government to restore their status to that of core workers in society.

Example is a wonderful thing. Successful strikes by unions at cinema chains, theatres, Scottish, English and Welsh museums and galleries, have shown the importance of collective organisation.

Meanwhile, on 7 September Jeremy Corbyn launched his Manifesto for the Arts, surrounded by cheering admirers. Its content derives entirely from the policies of the culture unions. Not only is their contribution not acknowledged, but not a single union representative was notified or invited to the launch.

• A determined two-year dispute at the National Museum of Wales (Amgueddfa Cymru) was stepped up with indefinite strikes from 28 April. PCS members demanded compensation for withdrawal of weekend pay allowances. Management were forced to settle in June, when the Welsh Assembly made extra funding available.

On an 81 per cent turnout, 78 cent of PCS members taking part voted to accept five years’ worth of allowances (double the previous offer) with an option to take pensionable payments, and a 4 per cent increase in basic pay for the lowest grades.