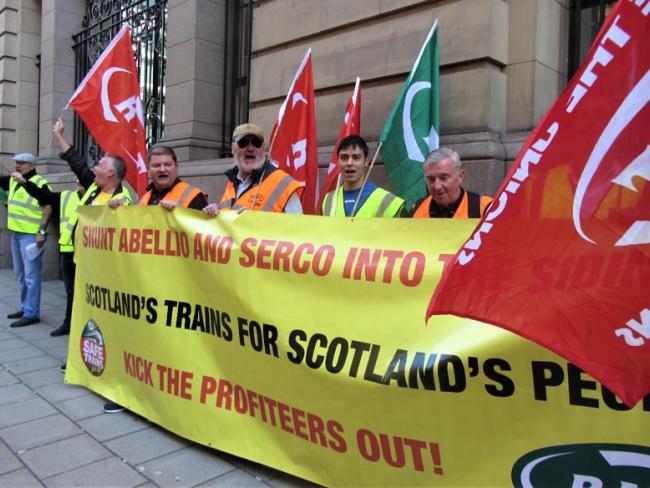 Demonstration in Glasgow, 20 September 2019, calling for ScotRail to be taken into public ownership. Photo Workers.

The reform of Britain’s railways was one item mentioned in the Johnson government’s recent Queen’s Speech. Perhaps predictably, the government is to publish a White Paper to implement the findings of the review of the rail industry led by Keith Williams, and progress the next HS2 Bill.

So the government has committed to implementing a review that it says it hasn’t seen yet! Williams will not report until next month, but industry cynics believe the outcomes were determined from the outset.

The review was instigated after the infamous timetable meltdown put down to the lack of a “single controlling mind”, something Williams has already said he will remedy. The other factor that led to the review, the failure of the franchising system, is also to be tackled with so-called “concessions” (a term favoured by the EU) replacing franchises, with financial incentives or penalties to improve performance. Further public ownership has already been ruled out.

The RMT’s General Secretary Mick Cash attacked the announcement, saying, "As we suspected all we are getting is the current failed rail franchising model re-packaged and re-branded.”

Mick Whelan, ASLEF General Secretary, commented: “I suppose we should be happy that a Tory Prime Minister has finally admitted what those of us who work in the rail industry have always known – that privatisation has failed.

“The railway is a natural monopoly and it should be run as a public service, not for private profit. In a way that works for passengers, for businesses, for taxpayers, and for those of who work in the industry as drivers and station staff.”

The Railway Industry Association has also warned against changes that lead to a pause in work or a hiatus in longer-term investment, and called for an end to boom or bust funding of that investment.

Williams and Boris Johnson are also championing further fragmentation of the industry, dressed up as greater local decision making. It is fragmentation as a result of privatisation that has so damaged the ability of the railways to meet the needs of its passengers, and only renationalisation can remedy that. Leaving the EU would at least remove the barriers to reintegration and public ownership.