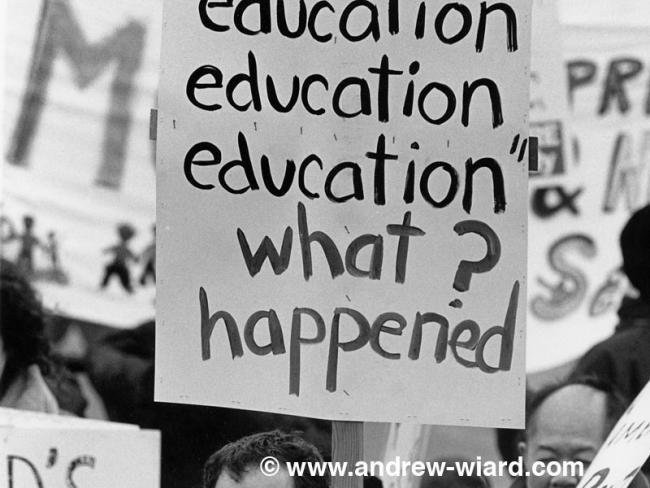 The enemies of education in government and religion all see schools as places to impose beliefs on children – and make money too. Photo Andrew Wiard/www.andrew-wiard.com.

Why are we so passive in the face of attempts by millionaires and zealots to pervert proper education?

One of the first tasks for the incoming Education Secretary Nicky Morgan on 15 July was to comment on the so-called Trojan Horse conspiracy. A report commissioned by the government into allegations of a Muslim takeover of some Birmingham schools had just been published.

Morgan immediately shot herself in the foot by referring to disturbing evidence that people with a shared ideology were trying to gain control of schools’ governing bodies. That’s an apt description for many of the academy chains now taking over Britain’s schools, of other persuasions besides Islam. The reality behind the headlines is more mundane, yet needs the attention of our class.

The report arrived after months of recrimination and hand-wringing. It is studded with head-turning phrases such as “aggressive Islamist agenda”, “anti-Western”, “intolerant” and so on. Yet it is so afraid of offending the sensibilities of mainstream Muslims that it has to invoke the fear of terrorism to justify its conclusions.

Schools are not sponsoring terrorism, but it suits the government to insinuate that might be so. Expect to see a wave of Ofsted reports next year downgrading schools for not explicitly teaching enough about the dangers of terrorism.

The minister also announced that Birmingham would have an education commissioner reporting directly to herself and the chief executive of Birmingham City Council. That sidesteps elected local authority responsibility. As a political bonus Morgan is stealing Labour’s thunder, as this is what that party is proposing on a national scale should it win the next election.

So, what is all the huffing and puffing really about? In December 2013, an anonymous letter was leaked to the Daily Telegraph. It claimed that some Muslim governors in Birmingham had been and were planning to systematically Islamise schools and oust headteachers who resisted. Accusations of Islamophobia were hurled at anyone who supported a call that such claims should be investigated.

Good heads did quit in the face of constant undermining by governors. There were links between governors in Birmingham and some in Bradford and other cities with a significant Muslim population. There was strong evidence that the secular, non-faith character of some schools was being replaced by a character more aligned to a conservative Islamic agenda.

Similar charges could be levelled at other faith-based schools. For instance those run by fundamentalist Christians who seek to impose their strange beliefs in schools for which they are responsible. They are not under investigation, but in a rare outbreak of sanity the 2012 ban on teaching creationism as science was extended this June to cover all schools including academies and free schools in existence in 2012.

This phenomenon isn’t new. For years, individuals and groups have sought to take control of schools. Some have a genuine belief that their variety of religion is preferable to any other. Most are driven by power and greed; there is money to be made in education these days.

The concern for teachers, parents and pupils is not that governors should wish to influence schools. It is the collective paralysis that takes hold when overzealous governors happen to be Muslim.

Albert Bore, leader of Birmingham City Council, hit the nail on the head commenting on Birmingham’s own investigation. He said: “The report has highlighted areas where we have either taken no action, were too slow to take action, or have simply done the wrong thing.” The report further states, “...this has often been because of the risk of being seen as racist or Islamophobic. Our proper commitment to cohesion in communities sometimes overrode the need to tackle difficult questions about what was happening in a small number of schools.”

This is a clear admission of failing to take the right action at the right time. Yet Bore invokes a wish for “community cohesion” in mitigation. That phrase is no more than a mealy-mouthed incantation which means anything and therefore nothing.

Why are institutions so prone to sitting on their hands whenever Islam gets a mention? That includes local authorities, although they have an admittedly dwindling role in holding schools and governors to account.

This weakness has its roots in the 1970s and 1980s when ethnic diversity was championed in the name of multiculturalism. That philosophy was borrowed initially from Canada and Australia, with their long history of immigration. It promoted the equal status of all cultures which coexist in a town or country and explicitly denied the primacy of the host culture. It demonised integration on the grounds that it swamped cultural differences, and placed those differences ahead of togetherness.

That approach had disastrous consequences, not least because it undermined the need to acquire a functional use of English.

Immigration to England in the 1960s and 1970s included a significant proportion of workers from Pakistan. A key focus of the emerging multicultural policies was respect for Islam and Islamic practices. That was so even when such practices went totally against existing British values such as equality between men and women, the right to choose your own partner and to determine your own course in life.

As a working class, as a people, we saw things we did not approve of; the application of Sharia law, forced marriages, first cousin marriage, the acquisition of British citizenship through marriage to an abducted schoolgirl. We tutted in private, and a few were brave enough to object openly, but deferred in public to the multicultural zealots.

British workers were in effect reluctant to acknowledge our own working class culture as more advanced than that of workers from less developed nations, who have not yet won for themselves the freedoms our forebears did.

The present manifestations of the ethnic diversity approach are everywhere to be seen. For example information leaflets in so many languages that they are unreadable or translation services local authorities pride themselves on providing, but which inhibit the learning of English.

This reaction, the acceptance of diversity over unity, is widespread but still mostly only skin deep. We have not for the most part succumbed to black unions, segregated workplaces and the rest of it. We could do with a bit of healthy pride in our own culture, created over centuries by our own class. We have assimilated internal and external migration, but in progress were united. The NHS, the education service and above all the union movement were all created by us and not imported.