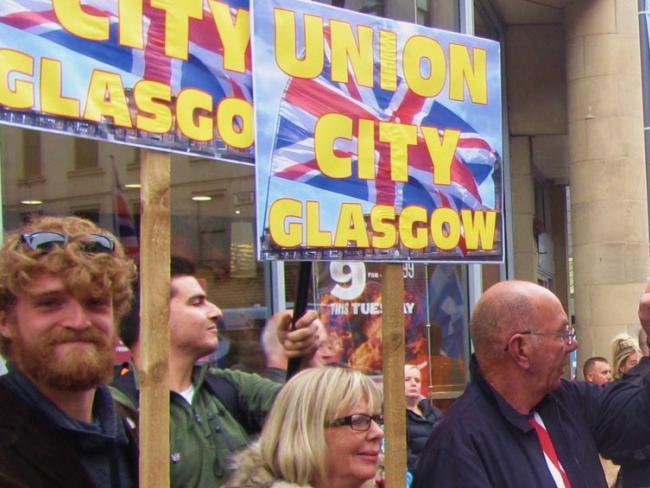 Union City Glasgow campaign. It aims to counter and reverse the notion of Glasgow as a separatist city. Photo Workers.

In a boost to Brexit and the quest to achieve a fully independent Britain, defeats and afflictions on several fronts are beginning to weaken the SNP government and the wider separatist movement in Scotland. While the Welsh Assembly accepted the EU Withdrawal Bill, the Scottish Parliament did not, voting by 93 to 30 to reject consent.

The area of contention is a group of 24 areas – out of 157 devolved areas – that need to be kept under central control in order to safeguard integrity of the UK's own internal single market. This is necessary to properly negotiate trade deals outside the EU after Brexit. The 24 items cover such activities as fisheries, agriculture, food labelling, environmental protection and public procurement.

The SNP dramatised this into a “power grab by Westminster”, staged walk-outs in Parliament during June and threatened to frustrate the Brexit process by copying the tactics used by the Irish nationalist Charles Parnell in the 19th century.

It was not long before there was a growing perception around Scotland of the SNP’s antics as hypocritical. Being all-supportive of the EU and demanding membership of both Customs Union and Single Market, they would, if their break-up of Britain were to be achieved, abandon control of all 157 powers back to the European Union anyway.

The SNP case was further weakened when the architect of the devolution convention, Lord Sewel, intervened to point out that it had never been intended that any constituent part of Britain could hold an ultimate veto over matters that need to be resolved by Britain as a whole. Neither was the repatriation of Britain’s powers from the EU meant to be part-distributed to Holyrood – as if the 2014 referendum to keep the UK together had never happened.

Over 40 years ago this Party fought against separatism with its pamphlet Unity not Devolution showing a united working class as the backbone of the nation. Several bodies are now coming onboard to seek to reverse devolution.

Of course, the SNP antics were part of a strategy to use the Brexit process to create circumstances in which the party could demand and win a second Scottish independence referendum. Hence the launch in May of an “economic blueprint”, the Sustainable Growth Commission report. But it was roundly condemned from all sides – including by proponents of separatism.

At the SNP annual conference in Aberdeen in June over 250 people attended a fringe meeting where loud applause was given to strong criticism of the “blueprint”. As well as embracing “austerity”, it comes firmly down on the side of globalised capitalism – perhaps as an entrance essay for EU membership.

The leadership of the Scottish TUC – who frequently bow in reverence to the EU – could only complain about being excluded from contributing to the document while praising its call for “the need for government, businesses and trade unions to work together”.

Having trotted off to Brussels the week before, SNP leader Nicola Sturgeon remarked that the SNP conference “marks the start of a new chapter on Scotland's road to independence”.

She had gained direct access to the EU's chief negotiator, Michael Barnier, to pledge allegiance to, and seek ways for Scotland to remain in, the EU Customs Union and Single Market, despite Brexit. While Barnier complained in a speech in Lisbon that Britain was refusing to spell out exactly what it wanted, he was no doubt hearing in Brussels exactly what the Scottish separatists wanted.

It took a former SNP deputy leader, Jim Sillars, who had tirelessly campaigned for Brexit, to voice the thought that arises from this by accusing his own party of “acting like a fifth column for the EU”.

In a bout of wishful thinking, the separatist movement resorted to inflating the numbers on its rallies. A body monitoring the recent SNP and “Yes” movement marches showed this conclusively. The Union City campaign in Glasgow counted the numbers as the march passed. Combined with aerial footage they demonstrated a crowd total nearer to 8,000 rather than the 80,000 claimed.

A similar exercise was carried out in Dumfries in south west Scotland. On both occasions the counter demonstration – for a united and independent Britain – was well received by the public.

The Scottish government's proposals on farming in its Climate Change Bill were described in late June as “devastating for farming” by Quality Meat Scotland chairman Jim McLaren, speaking at the Royal Highland Show. This came just as Nicola Sturgeon and Carwyn Jones (her Welsh counterpart) addressed a conference of the British-Irish Council, calling for staying within the EU Customs Union and Single Market.

‘The disputes encourage a turning away from separatist thought.’

Then came a joint statement from the Scottish Fishermen’s Association and the National Farmers’ Union urging Scottish ministers to get on with ensuring they devote enough money and manpower to implement trade and export policy following Brexit. Campaigning continues by Fishing for Leave from its HQ in Glasgow.

A steady stream of negative publicity and unrest has hampered progress for the separatists. Failings in dealing with the NHS, policing and education in Scotland are ongoing. A 5 per cent cut from central government became an 11 per cent cut to local authorities from the Scottish government.

Action by trade unions against this is beginning in earnest as we now see in the strikes organised by Unison, Unite and GMB (see Services: Dunbarton strike). The RMT, Aslef and TSSA continue their agitation against the ongoing privatisations carried out by the Scottish government, as in the cases of Northlink Ferries and train sleeper services (now run by Serco), and ScotRail (now run by Abellio).

In services, nearly 80,000 jobs have gone, while in college education 140,000 places have gone. In the year to June a total of 30 libraries closed down, up from 15 in the year before. For the previous decade such annual closures had been in single figures. The campaign Library Matters is gearing up to fight this.

In education, members of Scotland's largest teaching union, the EIS, voted in June to escalate a pay dispute to “strike readiness” and began preparing a ballot for August when summer holidays end.

Transnational energy companies have received the bulk of subsidies while smaller community energy projects get tiny loans. On 22 June Unite Scotland announced a yes vote for industrial action at Total E&P Shetland Gas Plant. Enthusiasm for this was shown by the 96.8 per cent yes with 96.9 per cent participation. Offshore members were expected to follow suit. The enforcement of three-week shift rotas was among the terms and conditions being reviewed by the company across its North Sea operations. Balloting on a separate dispute over hours was ongoing as Workers went to press (see page 5).

Still in the north, some success for RMT as well as Nautilus International was reported at the STUC annual conference. While presenting the motion on support for seafarers on the Orkney Ferries, speakers from these unions outlined how they had achieved good results after a long campaign of solidarity and perseverance for better pay and conditions. They had broken the “pay cap”, resulting in increased membership.

An earlier campaign by the RMT had highlighted the need for more attention to be paid to moving heavy freight by rail. This is a particular necessity in Scotland with the long distances involved. The RMT’s General Secretary Mick Cash laid out the overwhelming case, citing the problem as being “a lack of strategic planning and integration as a result of our fragmented, privatised railways”.

In the face of the Scottish government buying Chinese steel for the new River Forth bridge, the Community union received unanimous support from the STUC conference for its Save Our Steel campaign. They demanded the reintroduction of high quality steelmaking and slab casting facilities in Motherwell, at the Dalzell and Clydebridge plants.

In late June the fracking fiasco continued when the Court of Session in Edinburgh, Scotland's supreme civil court, ruled that the long perceived Scottish government ban on fracking for shale gas was not a ban at all. Ministers had to admit that despite proclaiming a ban, they had been merely been expressing a preference.

Ineos, meanwhile, had been forced to import shale gas by sea from the USA. With a proper evaluation and solving of safety concerns, this operation based at Grangemouth could play a major role in Britain's quest for energy self-sufficiency.

The disputes within Scotland encourage a turning away from separatist thought and EU dependency. Polls reveal a steady support for a united Britain, with the “No” answer to the question “Should Scotland be an independent country?” staying at a constant 50 per cent. The question was asked between January and June by Survation, Ipsos Mori and YouGov. The “yes” reply received 42 per cent in January, 46 per cent in March and 41 per cent in June, with the rest being “don’t knows”.