Skip to main content
Home » News/Views » Take back our fish!

Take back our fish! 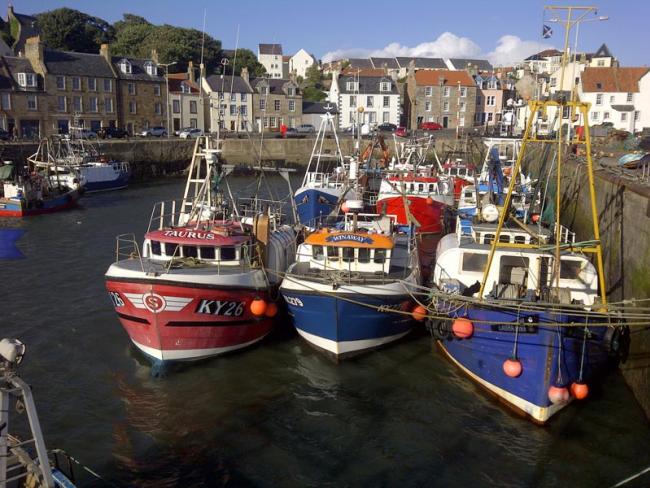 Fishing fleet in Pittenweem, Fife, on the Firth of Forth. Photo Workers.

Seizing the moment: The opportunities for UK fisheries after Brexit by John Ashworth, 38 pages, ISBN 978 1901 546 637, published by the Campaign for an Independent Britain, 2017, free download from campaignforanindependentbritain.org.uk.

This latest contribution from the author of The Betrayal of Britain’s Fishing provides a guide to the steps our country can take to protect and develop this key industry.

‘No one knows the real volume of fish taken from our waters.’

EU vessels take almost 700,000 tonnes of resource from our waters. This amounts to 55 per cent of the total catch of all EU vessels. That underscores just how dependent the EU fleet has become on our marine resource. In 2015, we imported 238,000 tonnes net of fish, worth £1.3 billion. Furthermore, we do not have any accurate discard figures, so no one knows the real volume of fish taken from our waters or where they were caught.

When we leave the EU, the rule will be that “The Treaties shall cease to apply”. All EU fisheries regulations will be of no effect. This includes the current 10-year derogation (Regulation 1380/2013) which restricts the rights of EU vessels to fish within 12 nautical miles of our coast and also the agreements allowing EU vessels to fish in our waters.

Under international law – the United Nations Convention on the Law of the Sea - our government will be legally responsible for managing our Exclusive Economic Zone (EEZ). That’s a zone of 200 nautical miles or the median point between countries. We will automatically revert to the Fishery Limits (1976) Act and the subsequent amendments. The regulations governing EU quotas and determining who fishes what and where in our zone will all cease to apply.

Brexit means that control of our EEZ comes back to Britain. The EU will have no input into how we manage our EEZ, nor any rights over it. Brexit means we are no longer beholden to the EU. As far as fisheries are concerned, we are now in charge.

The SNP was, until the general election, talking about a second referendum on breaking away from Britain so that Scotland can join the EU. If it ever does so, Scotland’s waters will be handed back to the EU and would be subject to CFP rules once again. But there would be a sting in the tail. Scotland would have to share in the overall reduced EU capacity required by the loss to EU waters of the English, Northern Irish and Welsh EEZs. Scottish fishermen would end up with even less quota in their own waters than they have now.

No wonder the Scottish fishing areas voted against the SNP in June. No wonder Scottish Conservative leader Ruth Davidson is now saying that control over fisheries is a “red line” in the Brexit negotiations.

Non-EU Iceland and Norway have full control over their fisheries. Upon independence, we can do the same. The Faroe Islands, situated north-west of the Shetland Islands, are a template for our future fishing policy which will bring both social and environmental benefit. They are not in the EU and have adopted a fishing policy which determines allocation by the number of days at sea. This is a much better system than the EU quota system.

In the 1970s and earlier Iceland successfully fought a series of “Cod Wars”, primarily against Britain. Its aim was to protect its fishing industry and to expand the exclusive fishing limits. During the same period Britain joined the Common Market – giving away rights for our fishermen that it sought to deny those from Iceland.

Ashworth concludes, “In this booklet, we have attempted to point the way towards a future fisheries policy which will undo over 40 years of damage, revitalising our coastal communities and creating new jobs while at the same time, improving the management of the entire marine environment.”