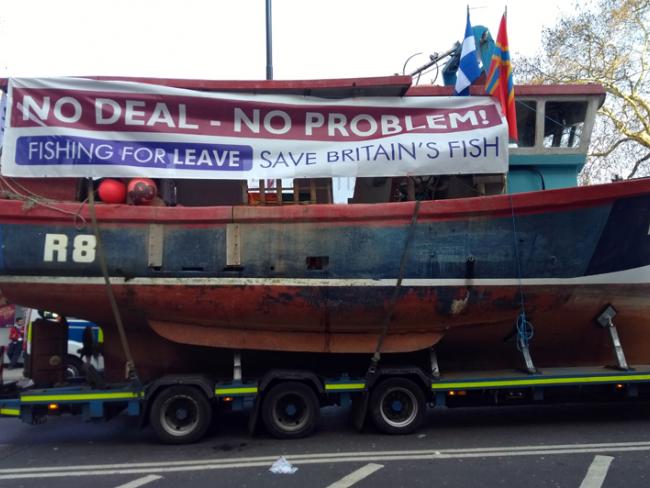 Fishing for Leave brought a boat to Westminster for the 29 March demonstration and rally. Photo Workers.

What can we do? There’s no point in waiting for any government to act. All political parties have shown themselves ready to sell out fishing at the merest hint from their Brussels controllers.

The Fisheries Bill, which was supposed to take back control of British waters, sits on ice, after a second reading and committee stage in December – “The Bill will deliver a sustainable fishing industry, with healthy seas and a fair deal for UK fishermen,” said Michael Gove, Secretary of State for Environment, Food and Rural Affairs, introducing the bill. Where is it?

The future of fishing was the test by which any proposals about how we leave the EU should have been judged. All possibilities failed the test, except for leaving without a deal. We should now behave as an independent nation.

There are possibilities: marine blockades of the big container and ferry ports, backed by land-based demonstrations of support; boycotts of imported fish.

The EU’s writ no longer runs in Britain, nor around our coasts. And, since we seem to have elections for MEPs, the question of fishing should be raised at every public discussion.

Action must be at the greatest cost to the enemy, at the least cost to ourselves. When the miners fought in 1984-85, they fought for their industry. Largely, they were left to fight alone. We cannot allow the same to happen to our fishing industry and our fishermen.