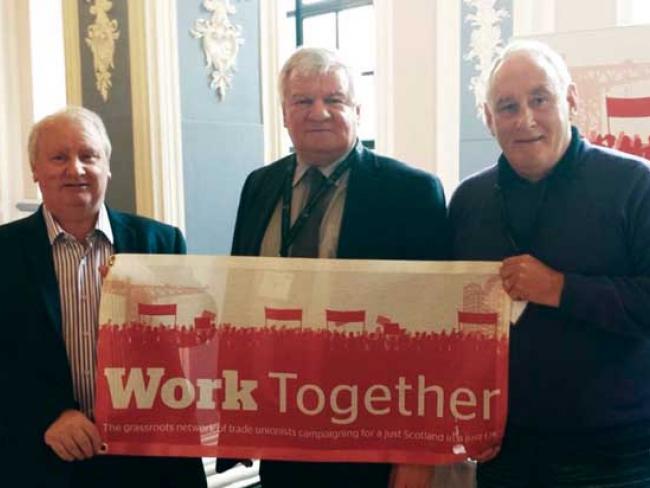 National Union of Mineworkers delegation including the NUM President Nicky Wilson (centre) giving support to the Work Together stall at the STUC in Dundee in April. Photo Workers

THE SCOTTISH TUC in Dundee in April saw the National Union of Mineworkers, ASLEF, Community, USDAW and GMB, with help from CWU and Musicians’ Union delegates, Work Together and United with Labour, organising a standing-room-only fringe event. Powerful calls for working class unity came from ASLEF’s Kevin Lindsay, Agnes Tolmie (past President of the STUC) and Neil Findlay (MSP). The conference itself was addressed by TUC General Secretary Frances O'Grady, who stressed the value of trade unions throughout Britain working together.

But a highlight was the NUM speaker who reminded us of the unity of the Miners' Strike 30 years ago and the urgent need now to fight for self sufficiency in energy – pointing out that 43 per cent of our energy production is dependent on imported coal. Most of the imported coal is “dirty” – in contrast to our own high-quality anthracite. These massive reserves under our feet should be subjected to clean coal technology and mined.

A speaker supporting the Communication Workers Union’s condemnation of the privatisation of Royal Mail made clear that the European Union and its directive lay behind such sell offs – with the Singapore government and hedge funds now the biggest shareholders in Royal Mail.■