Waiting for a good bus service? 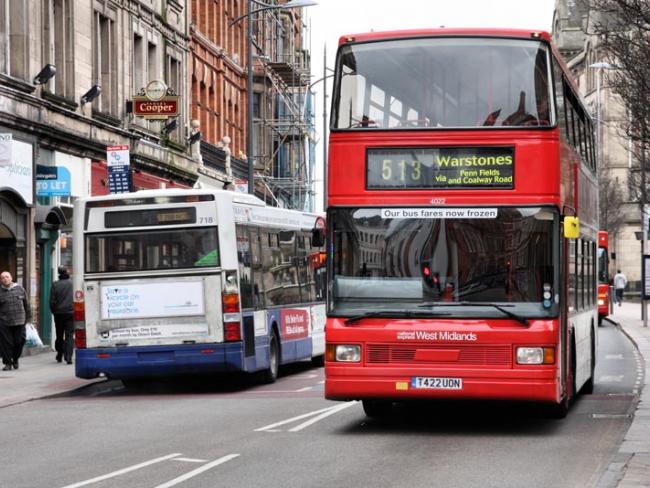 The chaos in bus services looks set to continue with the government rejecting key recommendations in a detailed Transport Committee report. ‘Regulated competition’ – the EU’s old refrain – is still being imposed…

Transport union RMT has expressed its anger, frustration and disappointment following the government’s response in October to the House of Commons Transport Committee’s report (published in May 2019) on England’s bus services.

RMT general secretary Mick Cash called the government’s response a missed opportunity to address the massive decline in the bus industry. Routes have been cut, thousands of bus drivers have lost their jobs and bus journeys have fallen by 300 million in five years as the private companies “cherry pick” which routes to run, leaving communities cut off and isolated.

Cash explained: “Government has failed to take action to address the excessive and unsafe hours in the industry…[and] to legislate to bring local bus driver hours in line with long-distance drivers. This shows that the Government cares more about the private bus companies’ profits than the safety of passengers.”

He pointed out that the government’s proposals for a national bus strategy cannot be delivered under the current deregulation and privatisation: “The bus industry needs to be renationalised, and run as a public service, not for profit. Local authorities need national ring-fenced funding to enable them to run the bus services”

The humble and much maligned bus is the backbone of Britain’s public transport network. Around 3 million people travel by bus in Britain every day, allowing them to connect with friends and family as well as accessing education, employment, health and leisure facilities. The bus industry supports around 250,000 jobs. It is vital to the economy and to ensure the mobility of much of the country’s population.

Over 60 per cent of all public transport journeys are made by bus. Twenty per cent of men and 30 per cent of women do not have a driving licence, and many who do don’t actually drive. Twenty-five per cent of households don’t own a car, and that proportion is much greater in London.

Around half of the 4.36 billion passenger journeys made on local buses in England in 2017/18 were in London which, since bus deregulation and privatisation in 1986, has had a different regulatory regime from the rest of Britain. Services and fares are specified by Transport for London (TfL), and operators bid to run TfL contracts. Under this model, TfL keeps the passenger revenues.

‘Some authorities have withdrawn subsidies totally.’

Outside London, bus companies are free to run whatever services they wish, setting fares and timetables. This system was introduced with the Transport Act 1985, which was designed to cut costs and encourage a more “commercial” approach. Local authorities then overlay the commercial network with what they deem to be socially necessary bus services that private companies won’t provide.

Faced with falling funds some authorities, particularly in rural areas, have withdrawn their subsidies totally. Others have seen deep reductions, such as North Yorkshire (78 per cent), Somerset (51 per cent), Leicestershire (57 per cent), Shropshire (60 per cent), West Sussex (64 per cent) and Central Bedfordshire (75 per cent).

When deregulation began in 1986, some local authorities reduced support on the naive expectation that more services would be commercially viable. At various times over the past 30 years local authorities have had different priorities on local bus support, depending on political outlook and competing pressures for funding.

The private companies sometimes threaten to withdraw from routes to get local authorities to underwrite their operations, a tactic that has become less effective as cuts in local government finances have bitten deep.

It is notable that outside London, Arriva (a subsidiary of the German state-owned railways DB) is the only significant foreign player with 15 per cent of the market. Much of the remainder is currently the preserve of British companies First Group, Stagecoach and Go-Ahead. In the London market, around 50 per cent of bus services are provided by foreign companies, including the Paris transport authority RATP.

First Group has 21 per cent of the action outside London, but pulled out of the capital a few years ago because it believed it couldn’t make enough money!

In the early 1980s, South Yorkshire was famous for its cheap bus fares which prompted a large increase in bus use. 1981 fares ranged from 3p up to 10p for 6 miles (allowing for inflation, 10p would be 38p at today’s prices). After deregulation and privatisation in 1986, those fares rose by 3 or 4 times within a few years, and bus usage slumped. Typical fares now are around £2 to £3, nearly ten times as high in real terms.

For many elderly and disabled people, the bus is a vital lifeline. Concessionary journeys (elderly, disabled, and youth concessions) make up around 34 per cent (1.51 billion passenger journeys) of all local bus passenger journeys in England.

Pay, along with health and safety, is a big issue for bus drivers. Bus drivers have seen privatisation and deregulation drive down wages to the point where many are barely above the statutory minimum wage.

As a result, the Unite union – which represents the majority of bus drivers – has fought a number of disputes with employers across the country in the past year. More than 2,000 Arriva bus workers in 11 depots in the North West took strike action last October over pay, paralysing local bus networks in the North West and successfully closing the gap in pay that existed with other Arriva colleagues. There have been other pay skirmishes across the country.

Both Unite and RMT are worried about the health and safety of drivers. Driving a bus often involves long hours, congested roads, and verbal and physical assaults, all of which lead to stress.

‘Many drivers are barely above the minimum wage…’

Training and competency is also an issue. At the beginning of October a 19-year-old Stagecoach bus driver who had passed his bus driving test only 3 months earlier crashed a double decker bus in Devon. He had never driven the route before, one that was described by the local RMT official as “a challenging road full of twists and turns”.

The Transport Committee report somewhat timidly urged the government to explore how recruitment and retention in the bus industry can be improved. The committee recommended the government consult on whether legislation governing bus drivers’ hours in Great Britain is still fit for purpose, or whether it should be amended, for example as is proposed by the Bus Drivers (Working Hours on Local Routes) Bill 2017–19.

The government responded by offering consultations but said that taking action “would risk imposing unreasonable burdens on the industry”, and that it has no current plans to make changes to drivers’ hours legislation. The message is clear; safety will not be improved if it threatens the profits of the bus operators or results in further subsidies being necessary.

Not surprisingly, the government has given a lukewarm response to several recommendations by the Transport Committee that seek to improve the funding regime in the bus industry. It has been equally unwilling to agree targets to encourage car users to switch to buses and other public transport.

It has even rejected the call by the Transport Committee to ensure a more consistent approach to concessionary fares for young people. Concessions are vital for enabling them to use the buses.

Notably, the government has ignored the part in the first recommendation of the report that refers to allowing local authorities to set up publicly owned companies – a return to the municipal bus companies that existed in the past.

A long-running call for other parts of the country to be able to regulate their bus services in the same way as London was endorsed by the Transport Committee, and the government has agreed to this – but with significant barriers for local authorities to overcome. The model being suggested by the government is based on franchising – and yet the same government is about to end the failed franchising model for passenger services on the railways!

Inevitably the dead hand of the European Union has played its part in influencing the continuing drive for privatisation and competition. In the words of the EU’s own website, “the main objectives of European public transport policy are to provide…passenger transport services through regulated competition”. As with the railways, only leaving the EU will allow Britain to take the opportunity to reverse that policy and return the bus services to public ownership and control, which the RMT is calling for.