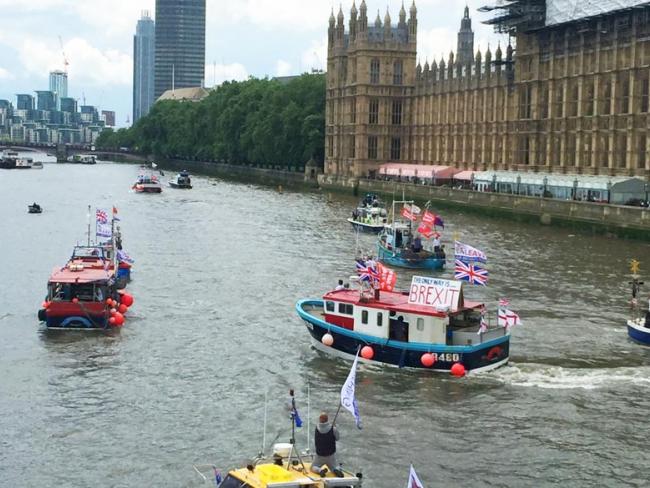 The “Brexit Flotilla” organised by Fishing for Leave that sailed up the Thames on 15 June 2016, a week before the referendum. Photo Workers

Fishing communities around Britain are looking for guarantees that their industry will not lose out again after Brexit, after a House of Lords report in December said that the UK may have to continue to allow EU boats to fish in our waters in return for a “deal” on access to EU markets.

Using fishing as a bargaining chip – as it was in 1973 – will not do, say the fishermen. It is estimated that 93 per cent in the fishing communities voted Leave, from Scotland to the coast of the south and south west of England.

Fishermen’s Associations from Thanet and Whitstable in Kent to Scottish White Fish Producers in the north are demanding a complete repeal of the EU’s Common Fisheries Policy and the re-establishing of British control over its 200-mile coastal waters.

Simon Collins, Executive Officer of the Shetland Fishermen's Association, reflecting the view of the entire Scottish fishing industry, says that Brexit creates a sea of opportunity for island and coastal communities throughout the UK. “Once out of Europe, the UK will have the right to manage its own waters as it sees fit and control access to them.”

They want to see a revival of their harbours and livelihoods, says Ayrshire fisherman Aaron Brown, who organised the Vote Leave 35-strong flotilla which sailed up the Thames on 15 June last year. The communities themselves have the right to determine the industry’s future. “We can define a proper fit for purpose policy”, he said.

In 1973 prime minister Edward Heath handed over rights to fish British waters – with some of the richest fish stocks in the world – in return for being “allowed” to join the EU. Now, according to latest estimates, 59 per cent of all catches in UK waters are by EU vessels, with 63 per cent of total catches throughout the EU being caught in British waters.

A new 90-page report from Fishing For Leave (ffl.org.uk), published in January, outlines the case for sovereignty for our fishing industry.

• Related article: A future for fishing

How to deal with the EU over fishing
Break clean for fishing
We need a clean break, says fishing campaign
Fishermen reject Defra panic
The battle for British fishing