Skip to main content
Home » News/Views » Which side are you on?

Which side are you on? 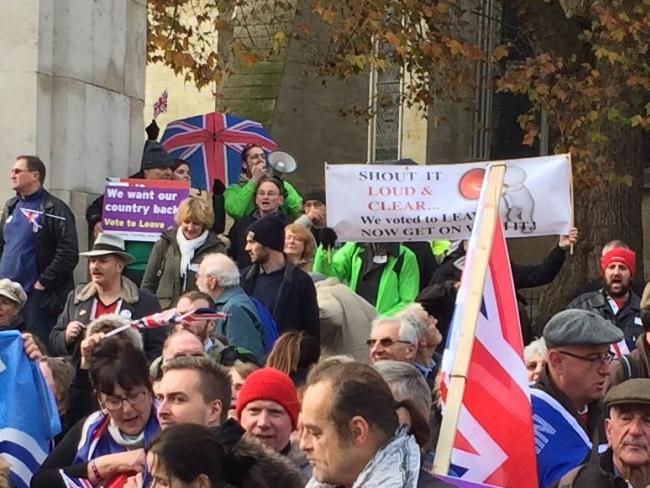 Demonstrating in London for progress on Brexit, 23 November 2016. Photo Workers.

In the days leading up to the French Revolution of 1789, the National Assembly used to meet with the commoners on the left and the aristocrats on the right. From this came the terms “left wing” and “right wing”. But what was a useful description 230 years ago has turned into its opposite. In modern Britain, these terms mean nothing.

They’ve actually meant nothing for quite a few years now. On their way to meaningless they have managed to obscure the truth that class is the true determinant of politics. So being “left wing” came increasingly to mean just single-issue politics, and less and less to do with seeking to advance the interests of the working class as a whole.

‘The issue for the working class, the overwhelming majority of the people of Britain, is control.’

Now the key question confronting Britain (and the world) is whether we allow global corporations and finance capital to destroy nations in their quest for universal dominance. “Left” and “right” have become a hindrance to thought.
That hindrance was visible during the referendum campaign, when the forces (to use the term loosely) of the “left” generally refused to work with the “right”. The culmination of this stupidity was the idea that Britain needed a “left wing” exit from the EU, when actually what we need is exit, pure and simple.

Such is the poverty of the left/right approach, as if “taking the fight to the Tories” were the be-all and end-all of politics.

Fortunately, the working class has taken no notice of its would-be political instructors. Workers voted to leave, and it will destroy the Labour party unless that organisation takes its instructions from them. While Labour fiddles, its voters are abandoning it. And not just its voters: in the Richmond Park by-election, its candidate managed fewer votes than there are party members in the constituency, which must be some kind of record.

Politics is being remade before our eyes. The issue for the working class, the overwhelming majority of the people of Britain, is control. We want to be able to control what goes on in our workplaces, our towns, our cities, our country.

The slogan of the referendum, “Take control”, was mocked by media commentators, but it is at the heart of progressive thinking. Workers don’t want to be told what to think and do by outsiders, and least of all by the likes of the EU, the International Monetary Fund and the banks.

Anyone who subscribes to this new politics is labelled “populist” (now a term used sneeringly, twisted from its original meaning). Those said to be embracing populism are often referred to as being “left behind by globalisation”, as if the rise of global corporations seeking to sap the power of nation states were some kind of beneficial process that had somehow forgotten to include a section of society.

This is nonsense, of course. All the grand talk about “globalisation” comes down to enriching a handful of billionaires while asset stripping the world. It is about exerting control and power over the world’s peoples. No one is “left behind” – on the contrary, all are to be under their thumb.

The institutions of finance capital can only do this if they destroy nation states and the power – however little used it may sometimes be – of the peoples of the world to say no, to assert their own interests, to take control.

The fight to “take control” extends to all areas of life. It has the capacity to rejuvenate our unions, our thinking, and our country. That, not “left” and “right”, is the new dividing line. Which side are you on?