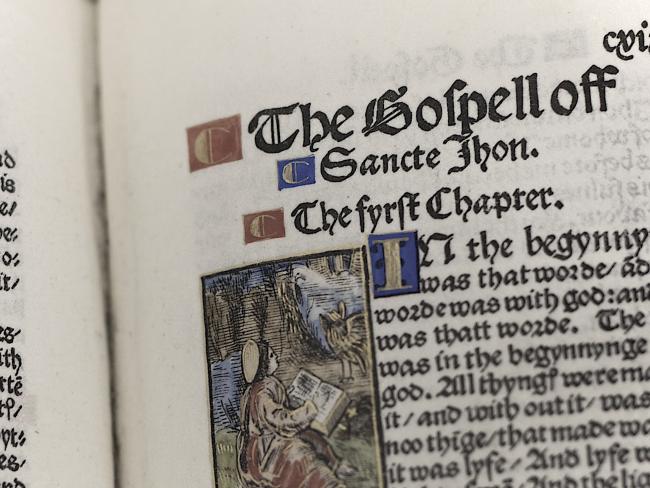 From the 1526 edition of William Tyndale's New Testament in the British Library.

William Tyndale (1494-1536) was one of the great independent thinkers who set England on a course to think and act for ourselves. And he helped make English a great language of poets and writers the world over.

The earliest of these thinkers were often Church men – since the Church educated those who were going to work for them. Two hundred years earlier John Wycliff had asserted that people could congregate and think for themselves without the need for clergy.

Wycliff and his followers the Lollards were denounced and persecuted as heretics by the Church. But their influence continued into Tyndale’s time when capitalism and a working class were beginning to develop within the feudal order. The Catholic Church, headed by the pope in Rome, still controlled thought and ideas. His local agents were the clergy, whose use of Latin excluded almost everyone else.

Like Wycliff, William Tyndale also studied theology and became a popular preacher. Growing up in the Gloucestershire countryside, he knew the people working on the land, who were mostly illiterate. Around 90 per cent of men and 98 per cent of women were then illiterate, according to academic studies based on parish register entries.

"A good translation of the Bible was a part of the struggle for independence of thought."

Tyndale knew that the Latin Bible was not his starting point, so his translation is very different from the earlier one of John Wycliff. He knew that to find the meaning he had to get back to the languages in which it was originally written, Greek and Hebrew. That enraged the Church.

In 1536 Tyndale was finally captured by the agents of the Holy Roman Empire, taken to Belgium and burnt at the stake, but not before he had translated the New Testament and a good part of the Old. These later became the bulk of the King James Version of the Bible.

ERECTED A.D. 1866
IN GRATEFUL REMEMBRANCE OF
WILLIAM TYNDALE
TRANSLATOR OF THE ENGLISH BIBLE
WHO FIRST CAUSED THE NEW TESTAMENT
TO BE PRINTED IN THE MOTHER TONGUE
OF HIS COUNTRYMEN
BORN NEAR THIS SPOT HE SUFFERED
MARTYRDOM AT VILVORDEN IN
FLANDERS ON OCT 6 1536