Skip to main content
Home » News/Views » 50 years on, why a revolutionary party matters

50 years on, why a revolutionary party matters 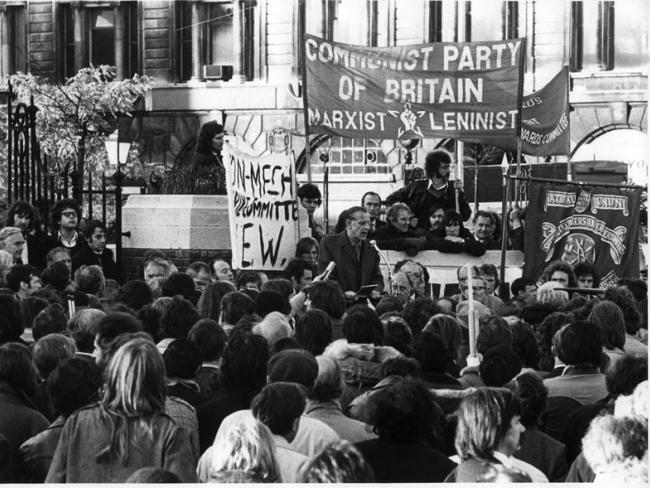 Founding chairman Reg Birch speaking at an engineering workers’ rally on Tower Hill, London, 1971, against the Industrial Relations Act introduced by the government of the day. Photo Workers.

​The comrades from 1968: For a long time our working class - the oldest in the world - lacked one crucial element: it had not produced a true revolutionary party from its ranks, a huge limitation in terms of its direction of travel.

It had no political body ready and willing to prepare all those wishing to end capitalism, the source of all the woes working people face.

For over two centuries our working class had battled independently in its trade unions, seeking survival by its own efforts. But by 1900 it embraced the distraction of a Labour Party and in doing so went down the path of voluntary emasculation.

Social democracy only sees workers as passive, an electoral force to be harnessed, whose lot on earth should be determined by politicians alone. This is a philosophy based on fear and hatred of the working class.

Another key impulse to the making of our Party was the negative example of the outfit pretending to be a revolutionary party, the Communist Party of Great Britain. Despite having the word communism stowed in its name, it never acted as a revolutionary organisation. It wanted to be merely a variant or even a member of the bigger social democracy, the Labour Party. It was always a revolutionary fake.

So 50 years ago, at the call mainly of industrial workers in the engineering union led by Reg Birch, our founding chairman, the Communist Party of Britain Marxist-Leninist was founded to rectify weaknesses that had long been undermining the potential of our class to take control of society.

With the CPBML there was now a revolutionary organisation produced by workers themselves, openly committed to encouraging the working class to go for revolution and the assumption of total power. Our Party was and is unlike any other organisation in Britain, wedded to achieving a ruling destiny for our class – socialism – where workers take control of the direction of society and refashion the country in their image rather than submitting meekly to the grind of exploitation and the intimidation of oppression. The roots and origins of our Party were in the organised working class. We are an organic development of that section of our class.

From the off we insisted that our work must focus on Britain. Workers need to have not just an interest in, but an affinity for, Britain because to have any chance of influence and eventual power, a working class must feel they belong to and ultimately own a country.

Although we probably weren’t fully aware of it in the early years, it now seems obvious that our Party was and is part of the reinvigoration and revival of communism in the world, following the sad decay of previous revolutions and earlier parties.

Our Party has had one unshakeable purpose: to change the thinking of the British working class – that is, to change its ideology – so that we can secure the understanding that our survival with dignity is impossible under a declining capitalism, that only revolution and working class rule will assure work, peace and security for all. The immediate purpose of British workers must be as complete a break from the EU as is possible and the building of an independent economy that serves the interests of the people, not finance capital.

We start from the premise that it is our class that is the source of change. It is working people that make history, not MPs, not politicos, not activists, not do-gooders. We understand the proper relationship between party and class. We do not subscribe to the outlook of certain parties in the past that saw themselves as an intellectual elite of full-time, professional revolutionaries, separate at the level of ideas and importance, doling out theory to the workers.

‘We know that workers are thinking beings.’

We know that workers are thinking beings, not led or misled by anyone except perhaps themselves. Examine Britain’s working class heritage and you can see there was once a tradition of strong-minded trade unionists, who were very skilled and full of intrinsic dignity, who were sure of themselves and acknowledged no external authority – only their unions. These characteristics are still needed. The skill, sheer professionalism and creative potential in workers is what social democracy and the establishment elites most hate and fear. As a Party, we will not be separate from the working class of Britain because we are from it.

Both the “lefty” politicos and the capitalist establishment are disdainful and contemptuous of this class force. For us, we do not seek to command the working class for it is composed of thinking beings who must be convinced themselves of the need for any course of action, whether it is leaving the EU, going for independence or making a revolution. They will have to make up their own mind for all these good things to happen properly.

Party members work in voluntary association, where everyone is expected to take responsibility and play a full part in developing the thinking and activity of the Party, solely for the purpose of enhancing the effectiveness and power of the working class. We operate on the willing and equal commitment of members.

We have no full-time professional revolutionaries and never will have. Communists must share the rigours of work or the nightmare of unemployment, and never be removed or be apart from the class.

The tasks of thinking, of facing up to unpleasant reality, and more importantly of suggesting ways to advance, are hard to do. To make an impact on the world, this reluctance to think and produce useful ideas has to be overcome. So in the party we reflect on and analyse current affairs in Britain and the world collectively. We prompt one another. Together we develop a strategy and tactics that not only make sense of the predicaments we face in Britain and the world but also chart a way out of the mess surrounding us.

We try to do our stuff to the best of our ability, and we want others to contribute. If you agree with our ideas, join us.

The young comrade: A founder member of our party recently said that this Party is needed more now than it was even at its inception.

To us, 50 years ago sounds like a long time, but in the course of history it is nothing, it's not even a blink of an eye.‎ And history is important because if you refuse to learn from history then you can’t make history.

So this is not an old party. This is a new party. And it is a party of a new type. It’s not one of many in a shop window of consumer choice – we are not asking for votes.

What workers want and what is in their interests are not always the same, which explains why we are so far from having socialism in Britain.

The job of identifying what is in the interests of workers as a class becomes ever more important. And that is why our party is even more necessary now than it was those 50 years ago.

This Party expresses the interest of the working class and because the working class, properly defined, comprises virtually the entire British people, then we seek to express what is in Britain's national interest.

If this Party did not exist, it would have to be created. So if you are a doer rather than a watcher then you should join us.

Progress will not come from social media. It will come from people coming together to discuss, resolve and act. We use all the tools at our disposal just as workers always have, so we use Twitter, Facebook and the Internet just as previous generations used pamphlets and leaflets. Face-to-face contact, though, remains decisive.

The future has always belonged to the young, if for no other reason than we have more of it ahead of us. So we must take an especial responsibility for how our country moves forward. Not just by voting in a referendum when given a chance, as many of us did in 2016, but in pressing forward the case for Britain as an independent nation just as we press the case for workers as an independent class.

The particular industries that created the class which created this Party are now reduced and much changed. So young workers have to find ways to organise in new ways in new industries. Workers must overcome the fragmentation inherent in many modern industries and find ways of organising within and against Google and Uber just as previous generations had to organise in engineering and mining. The obvious difference, and difficulty, is that the older industries brought workers together whereas the newer ones keep them apart.

As a Party we denounce the disgusting inhuman and inhumane aggression against Syria and we call on the working class to do so. We oppose the rising hysteria of warmongering propaganda against Russia.

We call on workers to join their trade unions, to fight for better pay and conditions and to see this fight as part of the fight for lasting social progress and the taking of power by our working class.

May Day is international workers day, so we send greetings to our comrades building socialism in the world, to our friends, sisters and brothers in Cuba. We send our solidarity to those fighting aggression and backwardness in Syria and elsewhere‎.

And we rededicate ourselves to the enduring struggle for peace and for working class power, the only route to making lasting progress possible.

• These are edited and shortened versions of speeches given at the CPBML May Day rally in London in on 1 May 2018.