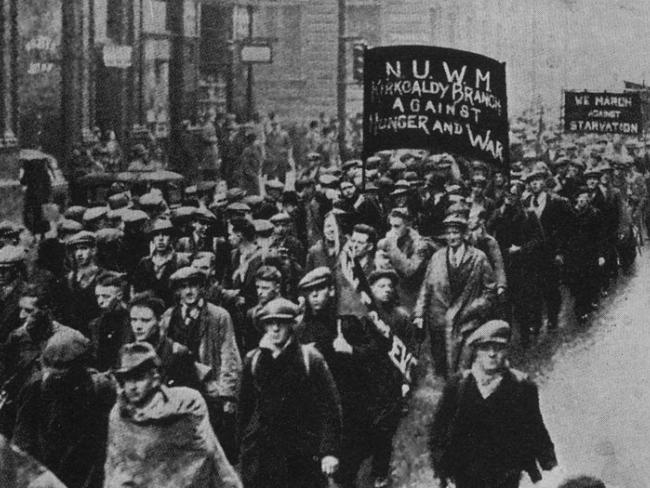 The high point of achievement for the British working class was 1945, and the post war years that followed. But how did 1945 happen?

What occurred before the Second World War deeply affected working class thinking and shaped attitudes about the type of post-war society we wanted.

Wealth and privilege and glaring class inequality were seen as fundamental problems of British society in the earlier decades. “No return to the thirties” and “Never again” were common, heartfelt refrains during the war. People had fresh memories of the empty promises made by the ruling class and its government after the First World War.

The people enthusiastically embraced new aspirations for post-war society because they had intensely disliked the bitter backdrop of the interwar years.

Grievances were many – the mass unemployment that had persisted for two decades, the harsh industrial and political set-backs following the tactically inept General Strike of 1926 that took a long time to wear off, the indignities of the 1930s Means Test, the general decay, idleness and dole in the widespread depressed areas that included industrial Scotland, the North-East coast, much of South Wales, parts of Cumberland, the city of Dundee and so on.

By the end of the 1930s there were signs that the working class was emerging out of the economic and political depression. There were concentrations of workers in new industries chiefly in the south of England. After a decade of losses, by 1937 there were increases in trade union membership and even some industrial unrest. Also, 1938 to 1939 witnessed increased rearmament activity.

To win the conflict with Nazi Germany, the British establishment gradually had to remake the Second World War as a people’s war, a total war, where the potential of the people was unleashed as the bedrock of victory, whatever reservations the ruling elite had initially.

As the war took effect, the government struck a contract with the people. For its hard work, the people would receive a guaranteed job, a living wage and care in times of need. The demand for munitions and productive workers created full employment – an unusual condition under capitalism. Workers took advantage to strengthen their collective bargaining power.

Though the largely conscripted troops endured poor pay and conditions (only the previously long term unemployed would have felt better off), war workers had higher wages and better job security.

By the autumn of 1940, unemployment was virtually unknown in Britain. By 1943 more than a third of married women were at work too. Lots of factory workers were producing munitions, tanks and guns and earning better wages than before the war.

Mass-Observation was a social research organisation set up in 1937 which became very influential. According to its reports at the beginning of the war there was a widespread suspicion of government, which was felt to be solely representative of the failed ruling class. With the Churchill-Labour Coalition from May 1940, there was a concerted effort to widen the base of government and to govern in a different way.

During the war the government, rather than employers, controlled manpower, wages and working conditions through the Emergency Powers (Defence) Act passed in 1940. Strikes were deemed illegal under wartime Defence Regulations on the argument that the nation needed maximum productivity.

Despite that, by 1942 the number of days taken by industrial action was back to its peacetime high. There were more than 1,700 strikes in 1943 in engineering factories mainly producing munitions, tanks and aircraft and nearly 2,200 in the following year.

Production did improve but the working class also largely retained its independence. Aircraft production was taken under Whitehall control and by 1944 more than 1.7 million people were engaged in building bombers and fighters. Joint Production Committees between management and workers were created to increase war output, which was achieved. After the war these were shelved despite an economic crisis.

The Second World War heralded a period of full employment and comprehensive welfare provision. After the defeat of Nazi Germany, the British people rejected the war leader, Churchill, in the General Election of 1945 and voted in Attlee’s Labour Party government that was to nationalise many industries and services as well as establish the National Health Service.

And yet this high point was followed just a few decades later by the low point of Thatcher’s election in 1979 and the era of privatisations and finance capital domination of Britain. What is the explanation for this woeful transformation?

Our high point seems also to have bred our low point. Did the British working class come to believe that the post-war advances were permanent, that reform of the exploitative system did not depend on working class organisation but on legislative enactments and alliances between unions and governments? Could our high point have become the source of our weakness?

Can a working class ever cease to fight against the encroachments and domination of capital? We must always aim to be independent, collectively organised and building our network of power.

Diary of a nobody
Revolution: which side are you on?
The aims of Soviet socialism
A long way from a believable future for rail
No pay, no productivity