US heightens tensions over Korea 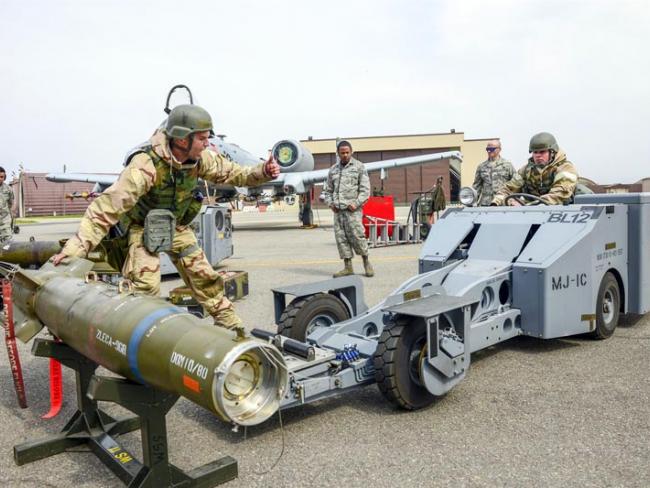 14 April 2017: A Paveway laser-guided bomb being loaded by US airmen, part of the New Jersey Air National Guards 177th Fighter Wing, at Osan air base, South Korea. Photo US Department of Defense.

With the US ramping up tension with North Korea, it’s as well to remember that the US has form in Korea. During the Korean War of 1950 to 1953 the United States Air Force dropped more bombs on Korea than on all Europe in all of World War Two.

The air assault was devastating. The USt dropped 7.8 million gallons of napalm on the country. It bombed the DPRK’s road and railway systems, hydroelectric plants, mines and dams. The US government threatened to use chemical weapons, and had contingency plans to drop nuclear weapons.

US General Curtis LeMay, who ran the bombing war, said of the Korean War of 1950-53, “We went over there and fought the war and eventually burned down every town in North Korea anyway, someway or another, and some in South Korea too.... Over a period of three years or so, we killed off - what - twenty percent of the population of Korea as direct casualties of war, or from starvation and exposure?”

The leading American historian of the war, Bruce Cumings, summed up: “three years of genocidal bombing by the US Air Force which killed perhaps two million civilians (one-quarter of the population), dropped oceans of napalm, left barely a modern building standing, opened large dams to flood nearby rice valleys and kill thousands of peasants by denying them food, and went far beyond anything done in Vietnam in a conscious program of using air power to destroy a society …” He called it “one of the most appalling, unrestrained, genocidal bombing campaigns in our genocidal twentieth century…”

The 1953 armistice agreement banned the introduction of qualitatively new weapons, but the US broke the agreement by basing nuclear weapons in the South. So it is hardly surprising that North Korea should seeks arm with which to defend itself.