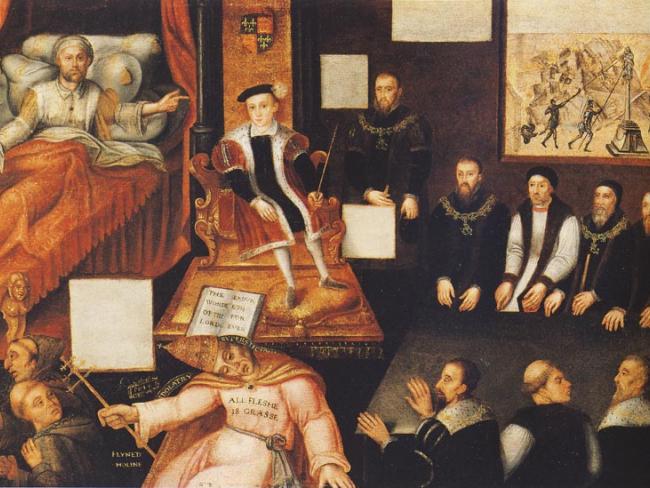 The English Reformation evolved from something lesser in scale and scope, the need of Henry VIII to divorce and marry someone else. Such a relatively trivial episode in the Tudor soap opera spiralled into a process that ultimately brought the total reconstruction of political power and social attitudes in England. The solving of Henry’s marriage problem catapulted English society in an unexpected direction.

A few months after his accession as king in 1509, Henry married Spanish princess Catherine of Aragon, his elder brother Arthur’s widow. Arthur had died young in 1502. For the marriage to proceed, the contracting parties had to obtain a dispensation from Pope Julius II. There were concerns that it contravened canon law and in particular Leviticus 20:21, which said the marriage of a man who marries his brother’s widow shall be childless. However, the papal dispensation was given and the marriage went ahead.

Although Catherine produced a female heir, Princess Mary, in 1516, the marriage was blighted with a series of miscarriages, stillbirths or infant deaths occurring within a few days of birth. The Wars of the Roses were fresh in mind; the Tudor rule that followed had been established less than 30 years beforehand. The establishment also remembered with anxiety Matilda’s unsettling rule in the twelfth century, the sole precedent of a female sovereign.

By 1525 Catherine was forty; there had been no pregnancy for seven years and Henry began to consider ending the marriage so as to strengthen the dynasty with a male heir. At some point between 1525 and 1527 Henry became attracted to Anne Boleyn. Preparations to annul the marriage began in May 1527 with the expectation it would be confirmed by the pope.

But in late May the situation drastically changed when troops of Charles V, Holy Roman Emperor and King of Spain, sacked Rome. They took the pope prisoner, making it impossible for him to grant Henry’s annulment to Catherine of Aragon without offending Charles, as Catherine was his aunt. For four years Henry tried everything to win over the pope but to no avail.

Getting older and more desperate, in 1532 Henry elevated a new type of minister able to sort out the problem. He found someone ready to work out a national solution, someone unafraid to politically reconstruct England. This skilful exponent of statecraft was Thomas Cromwell. He proposed a way to end the king’s difficulties with an ambitious plan that went far beyond Henry’s vague claims to supremacy. Cromwell set out to actually evict the pope from England, thus making supremacy real.

The king would not only get his divorce but a lot more besides – a huge transfer of wealth and a politically reconstructed country. Though he owed his chance to the king, Cromwell was to express sovereignty in terms of laws and institutions rather than merely through the sphere of an overriding monarch.

In the parliamentary session of 1532 a new temper to government was evident. The uncertainties of the previous four years were gone. The English church and the papacy were attacked with real weapons instead of innocuous verbal threats. Cromwell devised a series of parliamentary Acts over a number of years that transformed the state and country.

In turn these Acts destroyed the constitutional and legislative independence of the English Church, made the Church submit to the King as supreme legislator of ecclesiastical matters, evicted papal powers in England, abolished all church payments to Rome, designated England as a sovereign state, ended matrimonial appeals to Rome, stopped papal bulls having sway in England, assigned to the Crown the right to organise visitations of church institutions, gave the power to set church doctrine to the King-in-Parliament and ordered the dissolution of the monasteries.

Henry had secretly married Anne Boleyn in January 1533, as she was pregnant. He was safe in the knowledge that Cromwell’s policies would ensure a legal marriage and a legitimate heir. Cromwell’s ministry ended with his arrest and death in 1540; a result of aristocratic plotting. But the changes he brought about endured.

These changes were not just political or financial but affected the culture of the nation too. Vice-regent Cromwell was a committed patron of bibles in English: Miles Coverdale’s Bible (the first complete Bible to be published in English), John Rogers’ Matthew Bible and Coverdale’s The Great Bible.

All these developments clinched the government’s victory over papal authority and the saint cults. John Hilsey, Bishop of Rochester, exposed the Blood of Hailes, the Rood of Boxley and other time-honoured religious frauds. Superstition was under attack with the banning of charges to view relics, chantries and pilgrimages.

After Cromwell’s demise, Henry squandered much of the new streams of income on the war against Scotland and France (1542-46). The Crown had to sell the monastic lands between May 1543 and 1547. Most of the land purchasers were established local gentry, not necessarily the richest in the land.

This development ensured the survival of the protestant reformation in England. There was no way back for restoring papal powers. Dissolution of the monasteries meant a decline of clerical wealth and territorial influence together with a corresponding rise of large elements among the gentry. This had far-reaching developments that were to feed the demands of the House of Commons for political and constitutional change and ultimately determining the tensions that spilled over in the Civil War of the seventeenth century.

The Reformation freed England from following the papal bulls of mare clausum that allocated certain oceans and areas to the Spanish and Portuguese empires. British trade with the Americas could never have occurred without the break from Rome.