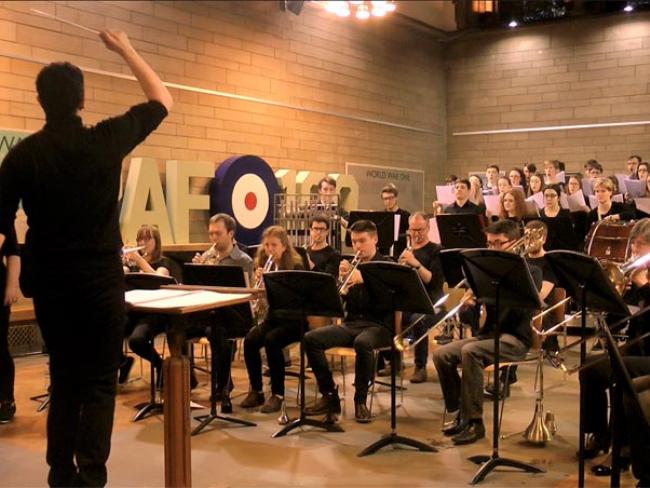 A major contribution to the current celebrations of the 200th anniversary of Karl Marx’s birth – and the 170th of the Communist Manifesto – has been the remarkable revival of a long-forgotten choral setting of passages from the book itself.

The original piece was completed by the Czech composer Erwin Schulhoff in 1932 for a large array of performers – four solo singers, double choir, children’s choir and large wind orchestra. The idea of presenting a first translation into singable English for the first time – as well as a reconstruction of the musical score – was the brainchild of a music student at the University of Glasgow, Harold Thalange.

Thalange also conducted the performance, at the end of April, which was given by the university’s Chapel Choir and an orchestra that he had organised for the occasion, using a translation of the singable version that the Czech poet Rudolf Fuchs had made of the Marx-Engels text for Schulhoff to set to music.

Schulhoff had sent the only copy of the full score to the Leningrad Conservatory for safe-keeping, but it was believed lost during the long siege of the city during the Second World war.

He had become convinced by the ideas coming out of the Soviet Union after working in Berlin in the 1920s and 1930s. He was on the run from the Nazis in the later years of the 1930s, but was captured in 1941 and died in Wülzburg concentration camp in 1942. (Fuchs also died in 1942, during an air raid in London.)

All that remained was the musical score for the voices, and from that the Czeckoslovak Radio Orchestra and Choir reconstructed the instrumental parts for its first revival in 1976. Now Thalange has felt compelled by this history, and by the importance of the piece, to create for the first time an English translation in a singable version.

Musically, Thalange has used a single choir (sopranos, altos, tenors and basses) with 4 solo singers – and re-arranged the orchestra to consist of 13 brass players, a pianist and several percussionists. Selected singers perform the children’s choir role from Schulhoff’s original score.

The results were impassioned and dramatic, with excellent and enthusiastic input from the choir and powerful and convincing singing from the solo singers. Key moments from the Marx-Engels text are presented: from the “spectre” haunting Europe of the opening, the encouragement to proclaim the ideas of communism, the transformation of struggles against slavery then against feudalism and then the modern working class against capitalism.

A sequence of tenor solos interrupted by chorus drones about the destructive power of capitalism, sings of how it paves “the way for more extensive, more destructive crises”. The first half ends in blazing key changes, dramatically proclaiming how workers are “the class that holds the future in its hands!” The second half is equally tumultuous, leading to the full cast finally belting out “We have nothing to lose but our chains; we have a world to win!”

When we think of the popularity of choral works like Handel's Messiah, it is worth noting that centuries of performance practice and refinement have contributed to creating the near-perfect versions we know. Now we have had a single performance of a revived choral work with a message vital for our future.

It goes without saying that, given more performances, that opportunity can be taken to refine it too. Different positioning of the choir for maximum audibility of the all-important text could be tried. The use of mutes for the brass to balance better with choir and soloists could be tried – as well as employing more moments of light, shade and crescendos as the piece builds.

We have to thank Harold Thalange for this revival, for arranging, conducting and organising it. As he has hinted, there are likely to be many more gems of music and song to be uncovered that would help to shine a light on the essential Marxist message.

And thanks to Glasgow University’s Chapel Choir for studying and performing the piece to such high standard. This enterprising choral group continue their weekly series of “Choral Contemplations” and are due to take their repertoire – ranging from 16th-century polyphony to new arrangements – to China when they visit in the autumn.