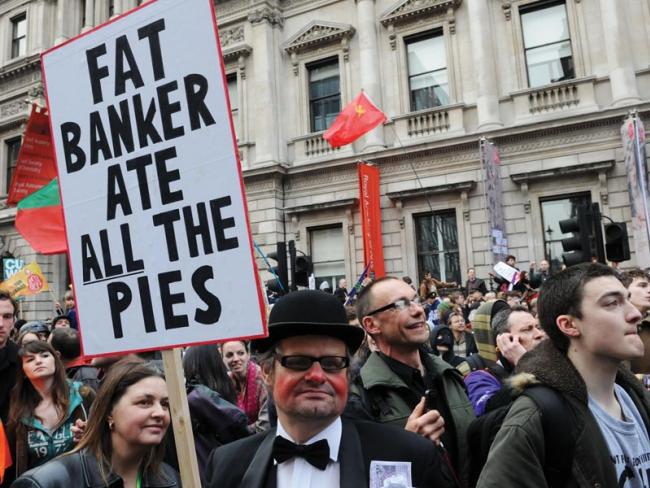 Austerity is a fake medicine. Supposedly aimed at cutting the state’s budget to promote growth, it produces the very outcomes it is supposed to avoid. In reality it is a deliberate policy of destructive deflation. Blyth charts the intellectual history of liberal economic thinkers from the 17th century onwards leading to this idea.

Blyth examines actual cases of austerity from the 1930s to the present. He points out that austerity is misrepresented as a “sovereign debt crisis” brought on by excessive state spending. In fact the crisis “started with the banks and will end with the banks”. Austerity is the price we pay for saving them.

Austerity is a fake medicine. Supposedly aimed at cutting the state’s budget to promote growth, it produces the very outcomes it is supposed to avoid.

Blyth argues that with the increasing deregulation of financial markets in the 1980s, traditional methods of banking were set aside. Risks in loans did not disappear, they were just pushed elsewhere. By 2007 many banks and financial firms carried a dangerously high level of debt relative to their assets. It was only a matter of time before poor economic results triggered bank runs and general panic.

This had nothing to do with the state or the public sector; the crisis was generated by the private, financial sector. In truth the crash of 2007-8 increased the debt of states globally by 40 to 50 per cent (an estimated US$13 trillion) directly as a result of the failures of finance capital.

In summary the author says, “Austerity ... has been disproven time and again, but it just keeps coming.” He also notes, “Austerity remains an ideology immune to facts and basic empirical refutation. This is why it remains … a very dangerous idea.”

Capitalists are once again jittery about the potential crashes over which they have no control – lurking in the murky world of capitalism. Workers need ensure governments don’t drag us into the long-running farce of bailing out finance capital again.