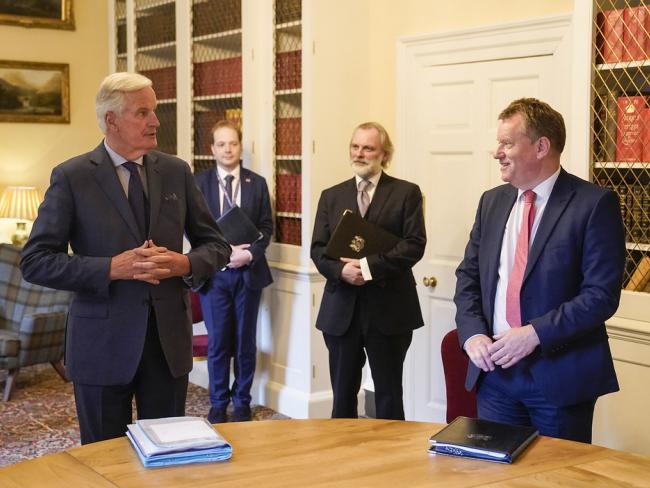 They have not published it, but here is what he said:

“First of all, a no-deal exit from the EU can hardly be described as an economic disaster, when for the last 10 years, UK exports to non-EU countries have increased in the region of 14 per cent, whereas UK exports to the EU fell by about 1.3 per cent. This surely shows the potential for the UK to prosper and grow, once the UK is free from the shackles of the EU.

‘The EU breaks international law not the UK’

“It is the EU that frequently breaks International Law, not the UK. The EU pays very little regard to its own laws, let alone international obligations. In 2010 the EU violated the Lisbon Treaty, by violating all the rules over the Greek and Irish bailout. Christine Lagarde, the then French Economy Minister [later head of the International Monetary Fund and now president of the European Central Bank], admitted the EU violated all the rules because they wanted to close ranks and really rescue the eurozone. The Treaty of Lisbon was very clear, ‘No bailout’.

“In 2004, Germany gave an illegal subsidy to Boeing for its Airbus planes.

“For months, the EU has been in material breach of its obligations under the Withdrawal Treaty. The UK as a state retains its sovereign right to withdraw from the EU, which is an international organization. When the UK exercised its right to leave, it participated in the withdrawal agreement (WA) process on an essential condition which is agreement on a future permanent arrangement with the EU that enshrines UK sovereignty and secures a Free Trade Agreement. By denying the UK an FTA, the EU acted in material breach of the WA.

“The EU has attempted to impose wholly unreasonable restrictions on the UK which no other country would ever accept. Again, the EU has breached its legal obligation to act in good faith. The WA also breaks the terms of the Good Friday Agreement, also jeopardizing the peace on the island of Ireland.

“The WA is in breach of the ECHR principle of the right to vote.

“The WA is in breach of the UN Charter principle of “self-determination” – its most important tenet.

“The WA Treaty has therefore been entered into by the UK on a false premise from the EU. The protocol and other aspects of the WA are incompatible with the agreement intended for the end of 2020.

“The UK has a legal right to override the WA and must exercise its right to suspend and terminate the WA obligations. The UK must subsequently pass an Act of Parliament, superseding and revoking the WA in line with Parliamentary Sovereignty under section 38 of the Withdrawal Agreement Act 2020.”

Michel Barnier, the EU’s chief negotiator, likes to lecture the British government on the meaning of the law. He showed his true colours in an online talk organised by Ireland’s Institute of International and European Affairs at the beginning of September.

He said, “…obviously the UK will recover full sovereignty on their waters – no doubt and no question on this point. But it is another thing, another story, speaking about the fish which are inside the waters.” His meaning is clear: sovereignty over our waters, and sovereignty over the fish are distinct and should be separately negotiated. In fact that is a false assertion of the international law, as well as being nonsense.

Chocolate’s coming home
Ireland and the EU: a bad marriage
EU: no friend of workers
EU hopes for coronavirus extension
Chaos and cost ahead as EU looks for more money