Skip to main content
Home » News/Views » Labour: a corpse in need of burial, not resuscitation

Labour: a corpse in need of burial, not resuscitation 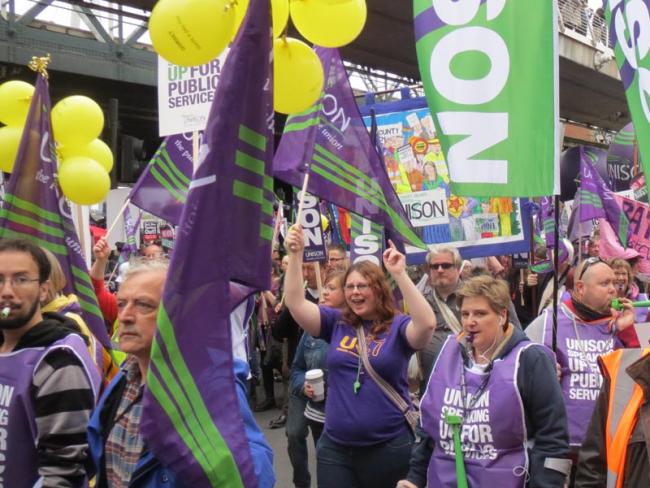 The Labour Party is a walking corpse. Created by the trade unions in 1900 in an attempt to shuffle off responsibility for social change to a group of professional politicians, it has failed – on an epic scale. And unless the established trade unions change tack, they will follow it to irrelevance. The time is ripe for de-coupling trade unions from the Labour Party.

The organisations that are supposed to represent the interests of workers have fallen – with few exceptions – fallenfor the lie that the European Union will save them from capitalism.

The opposite is true. The European Union has written the principles of free-market capitalism – “a highly competitive market economy” – into a constitution so fixed as to be unchangeable in practice, requiring as it does unanimity among all member states for any change.

‘EU freedoms mean denial of sovereignty over a country’s own waters and territory.’

Workers in Britain have looked at the “freedoms” of the EU, and we don’t like them. Freedom of movement means the freedom to bring in lower pay and worse conditions. Freedom of establishment gives capitalists the right to move across the EU in search of lower pay. The free movement of capital stops nations from requiring profits made within their borders to be invested within their borders. EU freedoms mean denial of sovereignty over a country’sown waters and territory.

We have also looked at the inherent, built-in denial of democracy embodied in the EU, with its unelected Commission. We have seen its “Parliament”, which can neither introduce nor repeal legislation. We have watched with anger as Westminster tried for over three years to deny us our vote in the 2016 referendum.

And we have noted with rising disgust that the Labour Party, the TUC and most unions have supported this attack on democracy. The only wonder is that Labour didn’t do even worse at the December 2019 election.

Workers must now take back control of the trade unions to which we belong. We have allowed the structures of most unions to be occupied by an unrepresentative minority more concerned with the fortunes of the Labour Party and their own political careers than with the interests of those whose dues pay their wages.

That must change. One good starting point would be the current machinations over who is to lead or mislead the Labour Party. The best approach for the unions would be to cut all their ties with it. A clean break. Leave the leadership election to the jackals of the various factions seeking to make short-term political capital out of the corpse, and strike out.

Britain’s largest trade union, Unison, is an object lesson in what not to do. It called for a second referendum on EU membership, but its executive did not ballot its own members before deciding to support Remain in the 2016 referendum. This week its Labour Link committee – without any consultation – voted to back arch-Remainer Keir Starmer for the Labour leadership.

It’s time for unions to declare that never again will they give their money to others to represent them. They should spend it on members’ own interests, rather than hand it over to the Labour Party – or to any other party – who are desperate to get their hands on union funds. Time, too, to learn to live without funding from the EU.

As for union members, we will need to clear out those who we have allowed to take over our branches, who speak in our name but who have embraced subservience to the EU and with it the rule of capital. If necessary – if those at the top who are so wedded to the EU block the renewal their unions need – we’ll have to create entirely new organisations to defend our interests.

That will be a longer, harder fight than that to implement the referendum vote, and it cannot be left to others. But it will be a battle that cannot be ducked if the workers of Britain are to build the country they deserve.