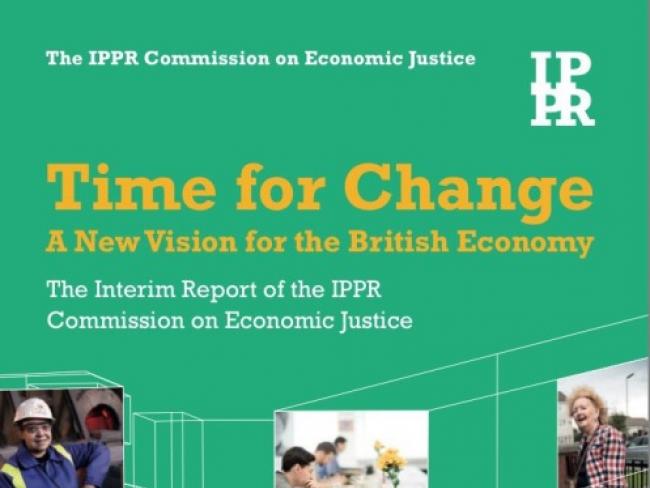 Time for Change: A New Vision for the British Economy: the interim report of the Institute for Public Policy Research Commission on Economic Justice, 112 pages, September 2017, downloadable for free from www.ippr.org.

This report is a good analysis of our situation, with much useful detail. It rightly suggests that we need a new economic approach. But it says too little about what must be done to put things right, as is the case with many similar reports. A final report, with policy recommendations, is promised for autumn 2018.

A rising share of national income went to labour from 1945 to the mid-1970s; ever since then labour’s share has fallen. Between 1979 and 2012, only 10 per cent of overall income growth went to the poorer half of the population. Almost 40 per cent went to the richest tenth.

Between 2007 and 2016 annual real wages fell by 2.6 per cent in Britain. They grew by 6.4 per cent on average across the 35 countries of the OECD, mostly developed industrial nations. At the beginning of 2017, real average pay in Britain was more than 3 per cent lower than in 2008. Nearly a third of our children – four million – live in poverty, and this figure is now rising again.

Median incomes vary widely. In England, incomes in the North West, South West and West Midlands are now more than 30 per cent lower than in London and the South East. In Wales, they are 35 per cent lower, in Scotland 22 per cent lower.

Our productivity, output compared to input, is 13 per cent below the average for the richest G7 countries. Growth in productivity has stalled since 2008. Leading British companies are as productive as any others. But we have a longer tail of low productivity firms, where weak management and poor use of skills lead to bad jobs and low wages.

We have a much higher employment rate than most comparable countries, but at the expense of low productivity, low wages and poor working conditions. Too many sectors of the economy have fallen into stagnation – low pay, low investment and low productivity. Rising stock markets and soaring property prices benefit the rich and are no measure of economic health.

A third of British adult workers are overqualified for their jobs, the highest proportion in the EU. This is because our labour market is one of the most flexible – deregulated – in the developed world. It is far too easy and cheap to raise output by adding a low wage worker rather than by investing in new technology or improving workplace organisation. The gig economy and other forms of casualised work have spread much faster and further here than in most developed countries.

Public and private investment in Britain is about 5 per cent below the average for developed economies. Corporate investment in fixed assets as a proportion of GDP fell between 1997 and 2014. And that investment was not even enough to replace worn out or end of life assets, so the stock of business capital is actually falling.

The amount of investment for the long term is a concern too. In 2015, Britain invested around 1.7 per cent of GDP in research and development. The figures for USA and Germany are about half as much again and double in Japan.

‘There are factors in the UK economy which ought to be challenged.’

There are factors in the way that the UK economy works that seem “normal”, but which ought to be challenged. The UK taxes labour highly and unearned wealth scarcely at all. Corporation tax is very low by international standards, and is too easily avoided. Compared with most advanced economies, Britain is disproportionately dependent on a small number of exporters: financial, insurance and other business services.

Loans to businesses account for a low proportion of UK bank lending. Much more goes to land and property, but these assets do not contribute to growth or increase the productive capacity of the economy. The equity market for company shares is no answer. It is now used more and more as a way to extract value and less as a source of new funds for businesses.

Unlike most European countries, British law makes company directors legally bound to promote shareholder interests above all others. Directors have to focus on financial performance over a one- to two-year period, compared with between five and ten years typically required for returns on major capital investment. The USA takes a similar short term approach.

Britain will have to develop and build in a different economic world from the recent past. The period since 2008 is the longest period of trade stagnation since 1945 and that may become the norm. The pre-crisis period was the anomaly, the result of financial deregulation, the new information technologies and China’s integration into the world economy; changes unlikely to be repeated.

Globalisation is unlikely operate in the same way in the foreseeable future either. From 2002 to 2008, Global trade grew rapidly between 2002 and 2008, at an average of over 12 per cent a year. Growth has been less than a quarter since.

Foreign direct investment flows inflated six fold between 1980 and 2006, when they reached over 30 per cent of world GDP. This has fallen back to around 20 per cent since the crisis. The global stock of foreign assets and liabilities nearly trebled between 2000 and 2007, but has hardly changed since.