Skip to main content
Home » News/Views » No sovereignty without defence

No sovereignty without defence 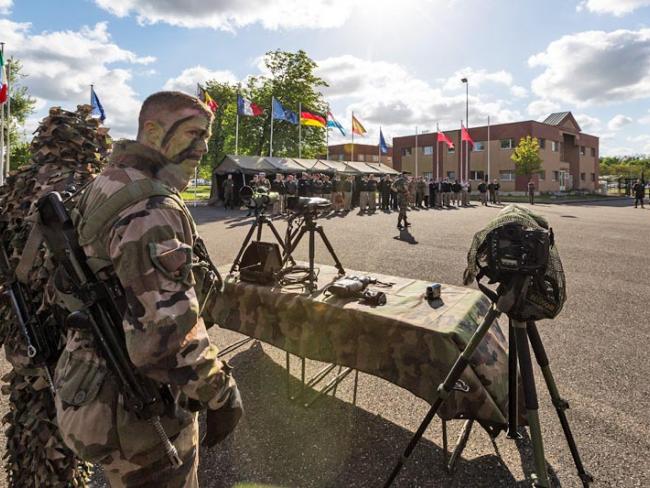 The Eurocorps displaying its wares in Strasbourg, 2014. ©Claude Truong-Ngoc/Wikimedia Commons

In April 2016, at the height of the referendum campaign, newspapers published German government documents revealing that the EU was about to announce a new military strategy. The EU and the pro-EU campaign furiously denied it.

Then, just five days after the referendum, the EU announced its new Global Strategy and began to create new military structures. In November 2016 it released its Security and Defence Implementation Plan. Only a few EU insiders had seen it, yet that same day it went straight to the EU Council meeting for approval.

Since our involvement in EU military affairs has largely been ignored during the election campaign, the CPBML held a public meeting on the topic in Conway Hall on 19 November. (The full text of the opening speech is available here.)

“We are discussing something that doesn’t exist – or so we are told…a European army.”

“This will be a very odd meeting tonight, because we are discussing something that doesn’t exist – or so we are told…a European army,” began the speaker. “And how do we know it doesn’t exist? Because Nick Clegg told us so in 2014. He said, ‘This is a dangerous fantasy. The idea that there’s going to be a European air force, a European army, it is simply not true.’”

What’s wrong with the idea of an EU army? It’s simple, said the speaker. Britain’s armed forces would be part of a joint force, under EU command, deployed as and when decided not by our elected representatives – but by the unelected European Commission, appointed by the European Council.

So, ultimate questions of life and death, war and peace, national defence and security would be decided by a body with zero democratic credibility.

What’s the evidence they are creating an army? The speaker spelled it out. They now have an EU Military Staff and an EU Military Committee, both part of the Command Structure of the EU Common Security and Defence Policy. They have the EU Peace Fund, a military intervention fund of 10.5 billion euros. They now have Military Planning and Conduct Capability, Single Intelligence Analysis Capacity, Defence Intelligence Organisation, and other structures that feed into military requirements.

On top of this, the EU is taking more and more control over member states’ armed forces, defence spending and foreign and defence policy. Without the threat of Britain’s vetoes, France and Germany called for swift change. The direction is, as ever, towards a single federal EU state. The aim is Common Defence by 2025, integrated Armed Services by 2027.

After the referendum there was no mandate for us to be involved, no manifesto commitment – we were leaving and government departments were due to leave, not join, EU schemes. But not before a few firm chains were fixed in place.

May’s Chequers Plan, published in July 2018, showed that the Cabinet had quietly agreed – without reference to parliament – to be involved in EU defence industry projects through the EU’s Permanent Structured Cooperation (PESCO). And the government put us into the Coordinated Annual Review on Defence, which would control the Ministry of Defence along with the EU defence ministries.

“There is no halfway house with the EU."

“There is no halfway house with the EU, you’re either all in or all out – a single claw ensnared, and the bird is caught,” said the speaker, “and it requires compliance with the whole EU rulebook, all its directives, policies, finance and structures. These entanglements mean the loss of control over our defence industries and capability – even our foreign policy – enforced by the European Court of Justice.”

Why does the EU need an army now? After all, the Soviet Union (never a threat, anyway) dissolved nearly 30 years ago. Ursula von der Leyen, the newly appointed (not elected, of course) European Commission President, says the EU is ready to ditch “soft power” and flex its muscles to “assert itself on the world”. When he was Commission President, Jean-Claude Juncker said, “With its own army, Europe could react more credibly to the threat to peace in a member state or in a neighbouring state.”

There is no limit to the EU’s ambitions. Listen to European Parliament Brexit Coordinator Guy Verhofstadt addressing the LibDem conference on 15 September 2019: “The world order of tomorrow is not a world order based on nation states or countries, it’s a world order that is based on empires … ” The conference rapturously applauded his call for a European empire. Is that what pro-EU voters were voting for?

The empire has its allies here, in Parliament, in the Foreign Office, the Treasury, the Ministry of Defence, the media, the trade unions. While falsely accusing Leave voters of nostalgia for empire they put forward a sentimental picture of an internationalist, peaceful EU.

But the facts point to a different reality, said the speaker. The EU impoverishes millions of African farmers by denying them the right to trade fairly with EU member countries; strips the fish from West African waters, imports cheap food, raw materials and labour from former colonies; wages trade wars; and has fuelled wars on two continents – in the Balkans, Ukraine and Libya.What should Britain’s defence policy be? “Well, not to build any empire! We should defend our people, secure our borders and our fishing waters, defend trade routes, defend against terrorists like ISIS, stop the people-traffickers (stop the boats and you stop the deaths), and  deter any who threaten our independence,”, he said. “We should unite on our common commitment to democratic values, national unity and national independence.”

In the very lively discussion that followed, speakers from the floor explored a wide range of issues associated with the topic.

Does the EU army project replace NATO? With its history of interference in Europe as a springboard to attack the Soviet Union and now Russia, perhaps the US government (as represented by Trump) is content to see the EU develop its army. On the other hand, the clear intention to create an empire for the EU could create a serious rival to the USA.

The EU army is for building the EU as a power bloc to face off the other power blocs – principally China, the USA and Russia. Power blocs constantly threaten and cause wars – and make any local disturbance far more dangerous.

But at home the EU army would be deployed in the first instance to deal with unruly member states and civil unrest within them. It could also be used to bully countries in Africa, which the EU has already begun to treat as its empire.

More important than what this or that bloc want, however, we need to concentrate on what we want. What do we need for an independent Britain?

Not to join a power bloc or build an empire. We need military capability to defend ourselves, so we must be able to build what we need for that and control it here. But the people are largely unaware of the EU’s development into a bloc with a single military structure and the intention to build an empire. There is a huge task to be done raising awareness, getting a debate started.

We are not going to be free of EU military ambitions quickly come the end of January. In determining our future trading relations with the EU, they are going to attempt to tie us into the entire EU agenda, as is clear in the Political Declaration and the Johnson-May Withdrawal Agreement.

EU procurement rules applied to UK military contracts threaten our shipbuilding, aviation and weapons development. With our relatively large military budget, the EU will go all out to grab it to fund its army and to bind us permanently into its procurement rules.

The road to British independence is going to be a very long one, but no state can be sovereign without the independent means to defend itself.