Skip to main content
Home » News/Views » Not a real change

Not a real change 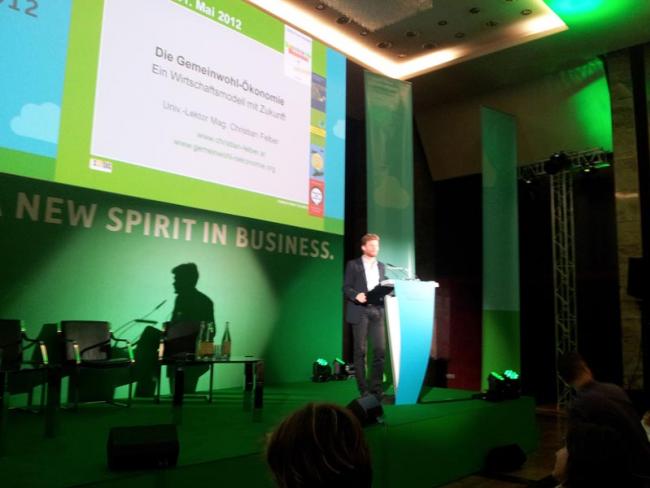 Christian Felber talking about his “Economy for the Common Good” in May 2012. Photo Nicolai Georgiev (CC BY 2.0).

Experience of untrammelled markets in recent decades has put capitalism in such bad odour that many people are desperately searching for other ways of organising life. Christian Felber, an economist and university lecturer in Austria, has outlined an “alternative” to the economic chaos and enormous social suffering caused by the oligarchs of financial capital. He advocates a partnership of companies, consumers and communities based on ethical goals.

His book revolves around two central questions. Is it possible for businesses to have a bottom line that is not for profit and endless growth, but which instead values human dignity, justice, sustainability and democracy? Is an alternative economic model possible that is untainted by the greed and crises of current financial systems?

Felber begins his analysis by looking at what values should underpin an economy. He notes “The ‘free’ market economy is based on the rules of the systematic pursuit of profit and competition. These pursuits promote egoism, greed, avarice, envy, ruthlessness and irresponsibility.” He suggests that “we thrive when we live in accordance with human values: the building of trust, honesty, esteem, respect, empathy, cooperation, mutual help and sharing.”

Capitalism: not a free market

Under capitalism he observes that the pursuit of the largest possible amount of personal financial gain “stems from the paradoxical hope that the good of all will result from the egoistic behaviour of the individual.” Markets do not automatically transform their participants’ pursuit of self-interest into the common good.

Felber reasons that if all have an eye on their own advantage they do not treat others as equals but rather as mere instruments, thus endangering the liberty of all. Therefore a market economy based on profit maximization and competition cannot be called a free economy.

Felber takes issue with Hayek’s claim that “Competition is in most cases the most efficient method we know.” He says he has found no empirical studies to back up Hayek’s claim, which has become a corner stone of bourgeois economics.

Felber refers to academic studies across numerous disciplines that found cooperation and not competition is the most efficient method. The outcome of 389 academic studies conducted in numerous disciplines (educational science, social psychology, game theory and neurobiology) were evaluated in a meta-study. Of those with a clear result, a remarkable 87 per cent found that competition is not the most efficient method we know, cooperation is.

Competition in market capitalism primarily “motivates” people through fear - of losing their job, income, status, social recognition and place in the community. Cooperation motivates people through successful relationships, recognition, esteem, mutual goals and mutual achievements. While competition delights in triumphing, in being better than someone else, cooperation emphasises performing tasks well and gladly because we find mutual purpose in it.

Then Felber directs his attention to the consequences of the pursuit of profit and competition, identifying and exploring ten crises of capitalism: the concentration and misuse of power, suppression of competition and the building of cartels, competition between locations, inefficient pricing, social polarisation and fear, failure to satisfy basic needs and reduce hunger, ecological destruction, loss of meaning and increase in alienation, erosion of values and shutdown of democracy.

The major section of the book sets out Felber’s view of an “Economy for the Common Good” (or “ECG”). He advocates redefining economic success. Capitalism measures economic success in terms of gross domestic product, financial profit and return on investment, all “monetary” indicators. Felber argues that’s a false view “...money is not the goal of economic activity; it merely constitutes its means”.

In the ECG, improving the common good would be the highest goal. He proposes that people be asked to name the twenty indicators of life quality most relevant to them and from them derive a communal “Life Quality” or “Common Good Index”. That is a quite a startling, but perhaps valid, basis for assessing progress. The success of an enterprise would be measured in terms of its “Common Good Balance Sheet”, which would create a reliable social connection.

Adam Smith’s theory of an invisible hand where social benefits occur unplanned from individual economic action would be set aside. Instead society would have a visible hand, a method which measures and rewards the success of economic activity in terms of its contribution to society.

A “Common Good Matrix” has actually been drawn up to measure 17 indicators. These include: whether products and services satisfy human needs; how humane working conditions are; how environmentally friendly production processes are; how ethical sales activities are; how cooperative the enterprise’s conduct is towards other enterprises; how profits are distributed; whether or not women get equal treatment and equal pay; how democratic decision-making processes are.

The nature of business plans would radically change. Felder offers this thoughtful observation, “If success were no longer equated with financial profit and companies were not allowed to devour each other, enterprises could finally find out what size is ‘optimal’ and purposeful for them in a composed, anxiety-free fashion and then strive to reach it. The capitalistic system dynamics would disappear and everyone would be liberated from the general compulsion to grow and devour each other!”

In an interesting chapter on finance and the need to establish democratic banks, Felder admits that an ECG requires an entirely different financial system to the one in use today. Capitalist banks have diverted to a perilous degree from their supposed core task of convert savings into loans and making these available to local enterprises, households and communities.

He proposes “Money as credit would become a public good and the financial markets would be closed.” The major “gaming tables” of the global financial market or casino would be shut. Derivatives such as loan securitisations, credit default swaps, commodity and currency derivatives would no longer exist. People would live on earned income, not on capital income.

‘Felber never refers to the power of states and existing capital or the clout of entrenched market forces.’

Felber, an innocent abroad, never refers to the power of states and existing capital or the clout of entrenched market forces. All would prevent an economy for the common good challenging or displacing the current capitalist set-up. His vision of the ECG is as a market economy, not a centrally planned one. To ethically unite the interests of companies, consumers and communities is a huge, complex task. Yet he seems to ascribe a mythical power to ethical arguments holding sway.

Although this book is a fascinating and thought-provoking read, you wonder if many of the ideas are just utopian or too cumbersome. Only a working class has the potential to effect change. However, in among the dubious propositions, there are lots of other stimulating ideas about how people can operate under capitalism to mitigate some of the system’s callousness and which will have relevance to how we will function under socialism, when we will need to fashion a common good.