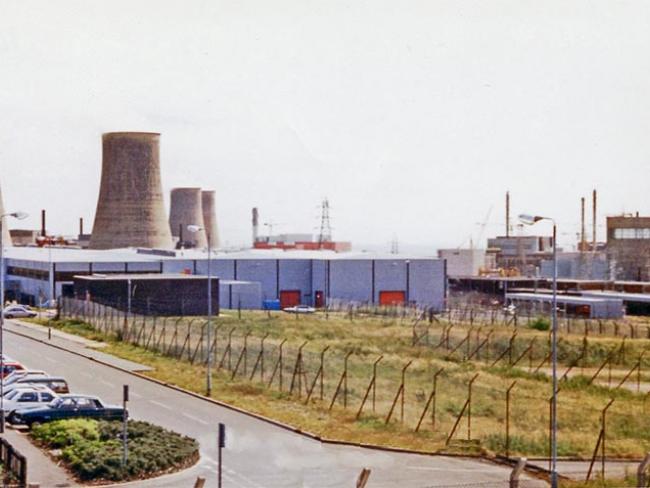 Nuclear research was spurred on during World War 2. British and Canadian scientists worked together in a project known as “Tube Alloys” to produce a nuclear weapon. They joined the Manhattan Project when America decided to develop its nuclear weapon.

By 1950, the two large nuclear piles achieved fission, creating new elements including plutonium. By 1952 Britain successfully tested its first nuclear bomb. Christopher Hinton, in charge of the construction of Windscale and other key parts of Britain’s nuclear infrastructure, recommended building a new, larger fission reactor that would both manufacture plutonium for the military and provide heat to create steam for power generation.

US non-cooperation meant that Britain had to develop its own nuclear technology. Nuclear reactors all require a way of controlling the fission (the “moderator”) and a mechanism for transferring the heat from the fission to a boiler to create steam (a coolant). As in a conventional power station the steam drives a turbine which turns an alternator to generate electricity.

Without access to enriched uranium and heavy water, controlled by the USA, Britain had to choose the combination of a graphite moderator and a gas-cooled reactor, a design known as Magnox. At the time there seemed no disadvantage to this design compared with the water-cooled reactors used in the USA, but it became a dead-end later on.

In the early stages, the British electricity industry didn’t contribute to the project (indeed, initially all of Calder Hall’s electrical output was used in making plutonium). The UK Atomic Energy Authority (UKAEA) controlled military and civil nuclear matters. It was independent, received government funds through a separate “vote” and could take rapid decisions.

Fortunately air filters had been installed on the chimneys, which greatly reduced the impact of the accident. They were added only late in construction and at considerable cost, on the insistence of nuclear scientist John Cockroft. Without the filters large parts of the north-west of England may have become uninhabitable. The full official report was kept secret and only released in 1992, but the fire did lead to safety improvements at the Magnox power stations.

The Magnox programme was justified mainly on energy security grounds, though by the early 1960s both coal and oil were relatively abundant. The CEGB ran the Magnoxes, which performed reliably and safely over the next four decades. Today they are now silent architectural reminders of a more optimistic past.

• In the past forty years there has been little progress in developing a revitalised nuclear power industry based on British know-how and technological expertise. Our longer article online at www.cpbml.org.uk focuses on these missed opportunities.