The struggle for paid holidays 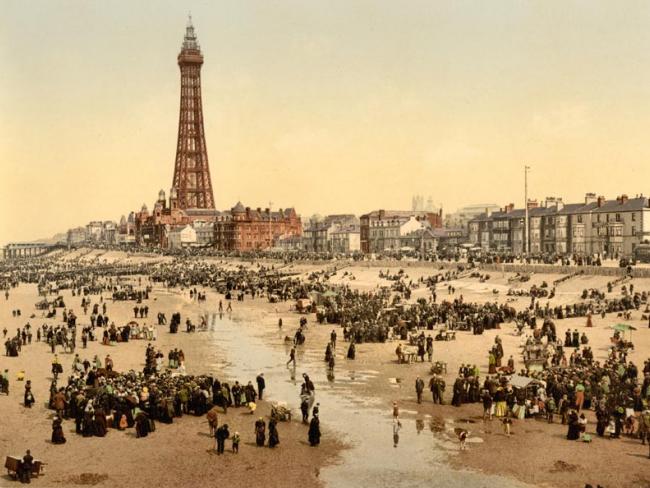 Photochrom print of the Promenade and Tower, Blackpool, in the 1890s, taken from South Pier.

Until the late 19th century holidays were only for the seriously wealthy. The cost of holidays was too high for most working people and families.

From the 1870s some clerks and skilled workers began to get a week’s paid annual holiday.By 1914 that had spread to clerks in the larger industrial and commercial concerns, bank and insurance workers, and administrative staff.

And holidays with pay for manual workers were not completely unknown. As early as 1840, the South Metropolitan Gas Company had agreed wages on Good Friday and Christmas Day and a week's holiday pay from 1860 for workers with constant employment.

By the 1890s firms such as Brunner Mond, Lever Brothers and the Gas Light and Coke Company had followed suit, along with establishments such as the London and North Western Railway Company and the Royal Dockyards. Some private firms had paid holidays too, though it was not unusual for leave to be deducted if workers fell sick or lost time during the year.

Positive development before 1914 depended on the trade union movement. In 1897 the Amalgamated Society of Railway Servants gained a paid holiday of one week's duration (after five years of service) for all passenger guards, brakesmen and signalmen.

The end of the war in 1918 saw an extension of paid holiday agreements. The Trade Boards Act of 1918 allowed holiday-with-pay settlements, while National Joint Industrial Councils established in certain industries at the end of the war could deal with the rules relating to holiday arrangements and respond to the case for paid holidays put forward by labour representatives.

By 1920 the official bodies in the flour-milling industry, tramways, the soap-and-candle trade, and paint and varnish manufacture had introduced a holiday with pay, usually of one week’s duration. By the start of the 1920s formal holiday agreements covered around a million workers in trades ranging at the national level from the railway service, public undertakings and the printing industry to co-operative societies, hairdressers and theatres at the local level.

Pressure from the grass roots secured a national Hours and Holidays Agreement from the Printing and Kindred Trades Federation in 1919 – a week's holiday with pay after one year's service – and covered nearly all workers in the industry. Important agreements were signed in the railway sector and boot and shoe manufacturing.

The post-war boom broke in the spring of 1920 and by 1921 Britain was in an economic depression. Yet in spite of these unfavourable conditions, the momentum of the 1919-20 period continued. By 1922 agreements covered about 1.5 million manual workers, though this figure did not increase dramatically until the 1930s.  In 1927 the TGWU union decided paid holidays would be “in all the future negotiations with employers”.

‘By the 1920s formal holiday agreements covered around a million workers.’

By 1930 a number of unions had made claims for paid holidays and won clauses in their collective agreements. In 1928, the engineering union began formal talks with the national employers’ federation on the demand for paid holidays, though the employers tried to delay making any general decision. In August 1929, nearly 100,000 workers in state-owned industrial establishments got one week’s holiday pay.

Industrial action was also used. In 1930 a holidays with-pay scheme began in the clothing trade between the Tailors and Garment Workers’ Union and three employers’ federations. Despite this, companies like Burton failed to introduce a scheme. In 1933 at Prices factory a lightning strike of 4,000 employees won them their holiday pay; and at the Schneider clothing factories in London, 1,000 women struck in a dispute over holiday gratuity.

Between 1918 and 1933 the trade unions’ holidays-with-pay campaign energised their own members, presented a case to employers and the state, influenced the climate of opinion and won acceptance for the idea that a holiday without wages was really no holiday at all.

With the economy recovering from about 1933, the industrial and political environment was more receptive to holidays with pay. Amid a prospering aircraft industry, the formation of the National Aircraft Shop Stewards’ Council in 1935 led to demands for statutory holidays with pay.

Towards the end of 1934 a grass-roots movement developed in South-East London representing the workers of two large electrical engineering firms, Siemens Brothers and Johnson & Phillips, calling for paid holidays. The shop committees at these two firms took the lead, with joint mass meetings and leaflet distribution in May 1935.

Finally the Cable Makers’ Association announced one week’s paid holiday for 20,000 cable workers. And the shop stewards committee at engineering firm Napiers in Acton, London, placed the demand before enthusiastic mass meetings of members, leading to the successful imposition of an overtime ban calling for 14 days’ holiday with pay.

Eventually, the Engineering Joint Trades Movement and the Employers’ Federation signed an agreement granting one week’s holiday with pay, reflecting the vast number of union applications made in all parts of the country.

Most working people came to receive a paid holiday in the form of collective agreements. By April 1937 there were at least 175 individual agreements on the files of the Transport and General Workers’ Union and overall 7.75 million manual and non-manual workers out of a total working population of 18.5 million were in receipt of holiday pay.

In 1938 the introduction of the Holidays with Pay Act enabled trade boards, agricultural-wages committees and road-haulage central wages boards to provide paid holidays when fixing rates of wages. But the Act was a weak piece of legislation and only applied to a potential workforce of two million – insignificant compared with the growth of collective agreements.

By 1939 the number of workers getting paid for their annual holiday had risen to about 11 million. This was not the end of the story, as further gains were made during the course of the Second World War, so that by 1945 about 10 million manual workers were in receipt of remunerative holidays. The principle of holidays with pay had been firmly established.

• A fuller version of this article is on the web at www.cpbml.org.uk.