Trade unions – past, and future 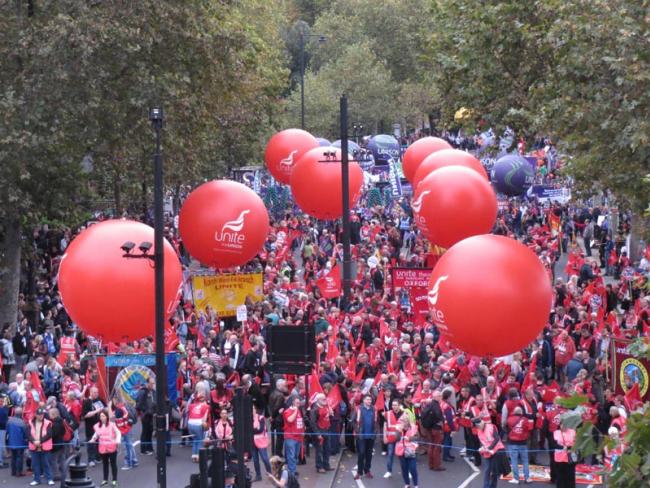 Balloons and razzmatazz.. all the essentials of the modern "super-union" - yet for all their vast membership numbers, membership density and involvement are often low.

Unions were born in conspiracy against employers and their governments. Responding to a much changed society and a historical need, the British working class emerged after land enclosures and the spread of capitalist farming. The early trade unionists chose an active response: they organised and fought.

The working class was there in its own making, self-reliantly creating its own defensive organs. Fortunately, the trade unions came before interfering bourgeois political parties. But before long others were telling workers what was best for them.

In 1834, 10 years after the repeal of the Combination Acts, do-gooder Robert Owen set up the Grand National Consolidated Union. It saw phenomenal growth to possibly half a million members only to collapse just as rapidly within the space of a year. You can’t impose development on a working class; they have to grow organically to it, and see it as their own.

Trade unions in Britain are primitive, elementary, defensive organs – the weapons of a working class against the ravages of capitalism. That’s how they were born, that’s how they should continue. Trade unionism means struggle to live, and that’s all. Trade unions and struggle begin when those most able to argue, most able to demand something for their labour power come together to express the collective need. Those most developed then have to convince others and enlist their support.

In the early nineteenth century workers reacted, even where their crafts and traditions were under threat or dying, defying illegality. Struggle was better than passivity and acceptance of their lot. The machine-breaking supporters of Ned Ludd (1811-1816) or the agricultural storms unleashed by Captain Swing in the 1830s left an indelible imprint upon ideas and the social relations of the nation they inhabited.

All these developments should be respected as well as the dogged attempts at dignity by the craft unions. We should never fear skill. And who knows what responses will come in the future from workers under threat of losing their jobs and role from the escalation of artificial intelligence?

Later in the nineteenth century there was an imposed development of general unions supposed to help workers outside craft unions. But they weren’t the actual creation of those workers. Instead of permitting or enabling people to work it out themselves the approach was “we will organise you into a union”. Those who joined such general unions lacked control of them.

The most backward thing that the trade unions ever did was to form the Labour Party in 1900. It represented a turning away from the potential of class strength, a conscious disavowal of revolution and a dangerous acceptance of capitalism’s right to exist.

Unions in Britain were once mainly based on identifiable skills or industrial sectors. That was still widely true just 30 years ago; now they mostly aren’t. Since the first formation of national unions, there has been a relentless fascination with amalgamations and mergers, which has accelerated with the creation of so-called “super-unions”.

The daunting number of members in such unions often conceals that in many areas their membership density is low. This (and the remoteness of the national organisation) imperils effectiveness in workplaces and sectors.

Only a few brave unions have resisted the urge to merge away their identity inside leviathans and keep to representing an identifiable membership with close accountability. Overall union activity is weaker rather than stronger for any move away from sensible bargaining groups.

We should ask in every union “how strong are we in our localities and workplaces?” Somehow workers in the big unions must find a way to create sectoral identities with real powers of action. Otherwise their needs will rise against unacceptable structures and come up with something new.

‘Only a few brave unions have resisted the urge to merge away their identity inside leviathans.’

We have also seen a shift away from the working class culture of building industrial strength in unions. Instead there’s a view that unions can be campaigning bodies. This is not their purpose and is as much a diversion from their role as was the creation of the Labour Party.

This suits the caste of self-styled leaders and politicos who have effectively been allowed to assume control in many unions in the absence of an authentic mass of workers wanting to direct matters. Taking back active control of proceedings is essential for British workers. This would transform the influence of trade unionism, which is increasingly ignored.

In the early days of British trade unionism, organisations rose and fell, appeared and disappeared according to popular tides and economic conditions. Perhaps we have become used to permanent bodies. But that can change when a working class sees a better way of protecting its interests.

Much has happened in recent decades to unmake the British working class. The major concern of trade unionists in the coming years should be to remake it. Changes in the nature of work over the last half century have not replaced class contradictions. In many ways they are more glaring and acute than ever. The way forward depends on developing once more the self-reliant capacity of our class in a time of desperate historical need.

Part two of our survey of British trade unions. The first part, published in the May/June issue of Workers, looked at the origins and very early years.