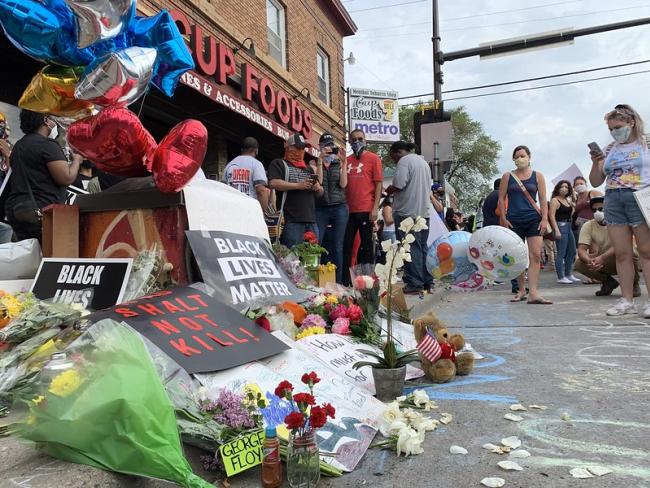 Memorial to George Floyd in Minneapolis on the pavement where he was arrested and killed, outside Cup Foods. Photo Lori Shaull (CC BY-SA 2.0)

In this country, it has triggered a lively debate and desire to address the issues for black people, especially the young, of police harassment (a daily experience for many), and widespread discrimination – open or tacit – in employment, among other things. This reality for members of our class needs to be addressed.

The decision of Black Lives Matter London to call off Saturday 13 June’s central London rally because of threats of violence by racist thugs demonstrated a desire to focus on the matter in hand.

One race: the human race

A good starting point for fighting racism is to acknowledge that there is only one race: the human race. Unity, not division, must be our watchword.

Race is a social construct – but one that can have devastating effects on people’s lives. Discrimination on the basis of skin colour is particularly easy for the prejudiced if it is not opposed and overcome.

Some have taken advantage of the BLM campaign to push false ideas about “white privilege”, looking to the history of imperialism to claim that the (mostly) white working class of Britain was guilty of benefiting from the “crumbs” dropped from the tables of imperialists, particularly with regard to the vile crimes of the slave trade.

When exploring British history we must look at it fully from a class perspective. Everyone should know of the proud history of class struggle in Britain and the resulting culture and identity of the British people as it stands on the verge of independence from the EU.

‘The Empire was run and built by the capitalist class.’

It goes without saying that the British Empire was imperialistic and did much harm. But the Empire (including the slave trade) was run and built by the capitalist class, and the working class suffered enormously under it.

At the time, workers looked at the slavers and saw the same enemy they faced in the factories and in the countryside. Then as now, anti-slavery was seen by many for what it was – a common fight.

Oppression abroad bred oppression at home. The period that saw Britain become the “workshop of the world” saw a sustained and brutal attack on British workers. By 1840, for example, 57 per cent of all working-class children in Manchester died before their fifth birthday. Around this time life expectancy at birth in Liverpool was just 15 years.

As the early industrial revolution unfolded, children as young as four or five were put to work in the mines. Working hours shot up, so much so that the Cotton Mills and Factories Act of 1819 had to limit working hours to 12 a day – but only for children between 9 and 16!

Bristol – the object of slaver Edward Colston’s “philanthropy” – grew rich, but the riches were held tightly by the merchants and factory owners. In the early 19th century it was a large and dirty city full of slums and desperate poverty.

In 1832, a year before the abolition of slavery in the British Empire, cholera struck. Spreading quickly among the tightly packed workers, the epidemic would kill more than 500 Bristolians before it ended; a further epidemic killed more than 400 in 1849.

The response of the advanced section of the British working class, the trade unions and the Chartists, to imperialism and slavery was to recognise the unity of purpose of black slaves and British workers, that they faced the same enemy, and to organise for the emancipation of the whole working class. We need that approach now more than ever.

Every worker here, regardless of ethnicity, is part of the British working class. An injury to one must be seen as an injury to all, rather than let those from the ultra-left or the openly racist ultra-right divide us.

Instead, we as a class must work in unity and take responsibility for the way Britain is being run and where it is heading. Together we must take control of our country, get involved and shape a future for the needs of all workers.

• This article has been edited to correct inaccurate figures on the Bristol cholera outbreak of 1832.