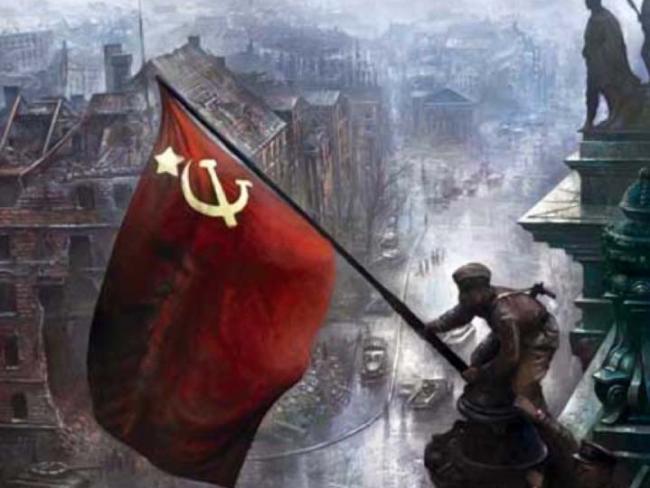 Photo-based illustration of the Soviet flag being raised on top of the ruined Reichstag, Berlin.

The Soviet Union bore the brunt of the Second World War in Europe, which ended with the defeat of fascism 75 years ago. The balance of class forces shifted away from capitalism for a few post-war decades...

After the battle of Stalingrad in the winter of 1942-43, the tide turned in favour of the Soviets. The German army was forced to retreat. For the next two years, the Red Army hurled back the Nazi invaders.

From 1943, the Soviet Union developed highly mobile, armoured formations. Their task was to punch through breaches in enemy lines, destroying German reserves and lines of communication.

In autumn 1943 the German Wehrmacht deployed 236 divisions on the Eastern Front, more than 60 per cent of its total strength and more than 50 per cent of all its armour.

When US and British forces opened a second front from D-Day in June 1944, they engaged just a third of the Axis forces and most of the best Wehrmacht formations were fighting on the eastern front.

First the Nazis were evicted from occupied Russia. Then the Red Army forced them out of Romania in August 1944, soon followed by Bulgaria and the Baltic states. By February 1945 the Nazis were out of Poland and Hungary; Vienna fell on 14 April. Immense Soviet forces were deployed along the Vistula river on the East Prussian border for the final assault on Germany which began on 16 April. These comprised an army of 6,500 tanks, 4,772 aircraft, 32,143 guns and heavy mortars and 163 rifle divisions. That represented a 5 to 1 advantage in manpower and armour; 7 to 1 in artillery and 17 to 1 in aircraft.

“Fortress Berlin” was Hitler’s last wartime illusion. Berlin’s defences were very poor compared to those of Moscow in 1941 (see Workers October 2011). Consideration was given to defending Berlin only in March 1945. Three makeshift obstacle rings were flung up: one 30 miles outside the German capital, another around its railway system and the last circling the central government buildings.

These defences were flimsy, without enough troops to man them and reliant on poorly armed Volkssturm and Hitler Youth members; they were easily overrun. No wonder quick-acting cyanide-based pills were much in demand among compromised Berliners. Eight Soviet armies encircled Berlin, and Red Army tanks advanced systematically, taking it block by block. By 25 April Soviet and Allied troops met at the River Elbe west of Berlin for a brief show of comradeship in arms.

Hitler’s fantasy of a “thousand-year Reich” completely ruined Germany. Most of its cities were rubble by the end of the war. A trail of devastation also littered the rest of continental Europe. Hitler’s ebbing empire was finally reduced to a concrete bunker 55 feet below ground.

In April 1945 Allied forces had overrun the concentration camps in Buchenwald, Bergen-Belsen and Dachau. Newsreel evidence was immediately screened in British cinemas, where audiences received it in stunned silence.

‘During the war people’s thoughts in Britain were already turning to the organisation of peacetime.’

During the war people’s thoughts in Britain were already turning to the organisation of peacetime. There was mass pressure for change. By 1942 this brought forth policy documents that culminated in the Beveridge Report. This called for comprehensive social reform of society – and sold 600,000 copies. Other reports followed with planning ideas for education, hospitals and full employment. Total war had depended on the state and the people.

That mood continued post-war when regulation of aspects of capitalism was popular. There was wholesale public debate of national plans in civilian life and the armed services.

From the first week in April 1945 people were buying bunting and Union Jack and “Welcome Home” flags in readiness for VE Day – Victory in Europe. Shops sold Victory scarves, ribbons, rosettes and even hair-slides. On 7 May VE Day was announced for the following day and a 2-day holiday declared. Crowds began appearing in central London that evening. At midnight big ships riding in ports from the Clyde to Southampton opened up their sirens whilst searchlights flashed out Vs across the skies. Lights blazed everywhere as blackout regulations were ignored.

VE Day was a long piece of national rejoicing. Large crowds thronged the streets of central London most of the day and night. There were set speeches by prime minister Winston Churchill and George VI to vast gatherings, plus innumerable impromptu light-hearted happenings with much dancing, singing, hugging and kissing.

Though London featured most in the media, much the same occurred in the other notable towns and cities of Britain. Floodlighting and glare replaced wartime darkness. There were bonfires with effigies of Hitler and his henchmen and fireworks everywhere, throughout the land. Inhibitions were temporarily forgotten.

In the general election of July 1945, Churchill’s Tory Party lost convincingly to the Labour Party. Hopes and aspiration for a better future were truly widespread, but these were dissipated and banished over the next few decades.

• This article first appeared in Workers in May 2014. It is reproduced now to commemorate and celebrate the 75th anniversary of the liberation of Europe from fascism.