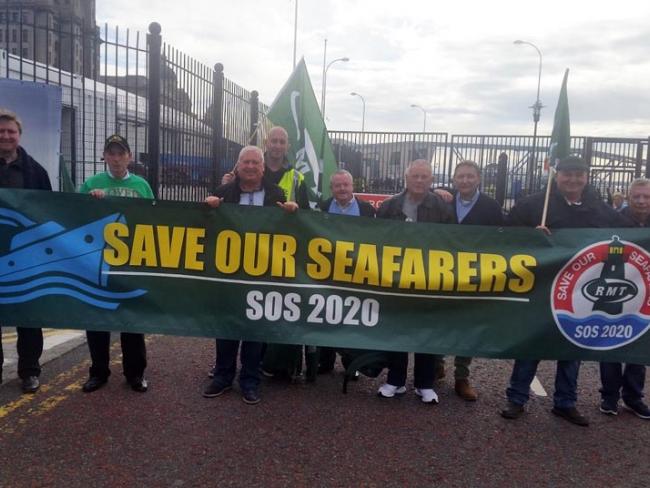 20 October 2017, Liverpool. RMT protest at the “christening” of the Atlantic Sea – on which there are to be no British seafarers even though the vessel is registered at Liverpool. Photo RMT.

Free movement of labour from inside and outside the EU has seen employers taking on staff at below even the minimum wage. These include P&O on the North Sea and Irish routes (which the RMT is fighting). And on Scotland’s only ro-ro freight link to the Continent, from Rosyth to Zeebrugge, DFDS is employing Lithuanian ratings at below the minimum wage.

All this is legal. Uniquely for a group of workers in Britain, seafarers are excluded from legislation under the national minimum wage, and from equal pay legislation.

Ratings on the Cyprus-flagged ship MV Daroja, which operates between Aberdeen and the Orkneys and Shetlands, are paid just €3 an hour, says the RMT, which has been organising demonstrations on the issue in Scotland.

The RMT says migrant workers are paid just £2.40 an hour at Condor Ferries, and just £2.25 an hour at Streamline working between the Northern Isles.

The RMT is responding through its SOS 2020 campaign. In a notable victory last year it forced Scottish government contractor Serco to pay at least the minimum wage to non-EU nationals employed through a subcontractor on the Seatrack service, who were being paid £3.66 an hour.

Nautilus says promises made during the referendum campaign about restricting the immigration of unskilled workers “must be applied to the shipping industry”. It notes, “Shipping companies have increasingly recruited foreign crews to profit from sub-national minimum wage pay rates and this must end.” It wants regulatory action “to stop unscrupulous ship owners exploiting foreign seafarers and discriminating against UK seafarers”.