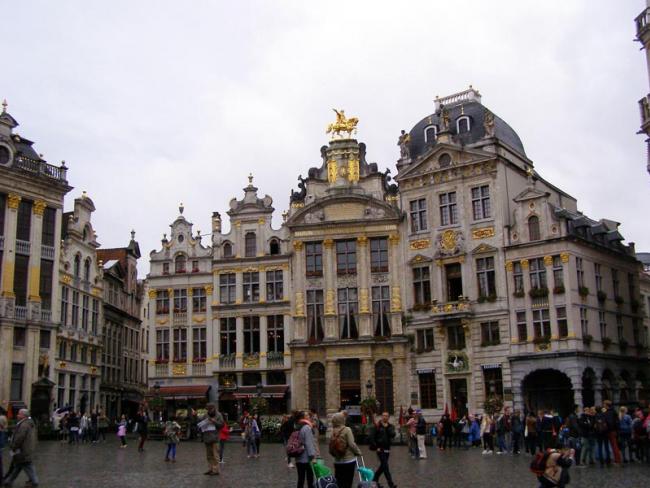 The Manifesto was largely written in the Swan brasserie in the building on the right, on the Grand Place, Brussels. Inset, portrait hanging today in the brasserie on the ground floor of the building. Main picture magro_kr (CC BY-NC-ND 2.0).

The Communist Manifesto was published during 1848, a year when revolution swept across Europe – and it has changed our view of history. Before it appeared, the drivers and decisive agents of history were assumed to be kings and queens, nobles and aristocrats, bankers and merchants, industrial capitalists and bourgeois reformers. Control of society was seen as the preserve and plaything of the ruling classes.

The Communist Manifesto turned existing political assumptions upside down. It opens with the statement that “The history of all hitherto existing society is the history of class struggles” and sets out to explain how and why that applies to capitalism, the economic system we still live under.

It not only revealed the essential weaknesses in the capitalist edifice but also identified workers as the source of renewed progress. Capitalism cannot exist without the working class it created, but in doing so also created its own gravediggers.

Karl Marx composed his programme for a small group of revolutionary German tailors and shoemakers living in Brussels, where he was residing in exile. Though the membership of the group was counted in tens, Marx did not think small. Instead he crafted a political classic that was universal in its scope, capturing the future aspirations of the entire working class.

Analysing the transformation from feudalism to capitalism, Marx showed that modern capitalist society had not done away with class antagonisms, but had simplified them. Society as a whole was increasingly splitting into two hostile camps with two great classes directly facing each other, the bourgeoisie and the proletariat.

With remarkable prescience, Marx predicted all the huge changes taking place in the composition and extent of a working class, even though the trend was small when he wrote: “The bourgeoisie has stripped of its halo every occupation hitherto honoured and looked up to with reverent awe. It has converted the physician, the lawyer, the priest, the poet, the man of science, into its paid wage labourers.”

Marx had anticipated revolution unfolding in the more advanced capitalist countries with organised factory workers leading the way, but it did not turn out that way.

A special period of impressive class struggle and cooperation across countries took place during the First International (1863 - 1872) when Marx was the guiding force in the working class movement. But workers in the advanced capitalist countries generally opted for a more limiting struggle.

Working class revolution did break out later in unexpected places – Russia, then China. The Russian revolutionaries in particular based their thinking on Marx’s writings and the ideas set out in the Manifesto.

As outsiders it is always hard to assess, but it appears that in the USSR at least too much power was invested in the communist party and not enough vigilance taken to ensuring that debate, control and power came out of an ascendant working class. The people must be in charge, leading, not just in name.

Revolutions of the future will take note, will be better off and more durable as a result. Communism will have to rise to the new challenges of working people struggling to keep their heads above water, and prove its worth anew.

‘He crafted a political classic that was universal in its scope…’

Triumph and defeat in class struggle are ephemeral, constantly changing sides between the two contesting classes. On a worldwide scale capitalism is terribly unstable and full of whirling crises. People everywhere find survival with dignity impossible because the policies governing their lives suit finance capitalism and the big capitalist monopolies.

This has been the case in Britain for many decades. As a result the people want change, hence the push for Brexit and real independence from profit and market forces. There is a strong desire to create a society that serves the interests of the working people. In the Manifesto Marx stated that after the bourgeois destruction of feudalism, capitalism wanted to “create a world after its own image”. The working class today should do the same.

The Manifesto is not an archaic document: its analysis of class has enduring relevance. It’s pertinent, for example, to taking control of the independence movement in Britain. Marx’s message clarifies the task of today: “The proletariat must first of all acquire political supremacy, must rise to be the leading class of the nation, must constitute itself the nation.” In other words, take control of independence, shape the destiny of the country.

The vast majority in Britain are working people, though they may not always admit it. If unity can be constructed across the class, we are many and they are few.

The Manifesto warned that historically class struggle is “a fight that either ended in a revolutionary reconstitution of society at large, or in the common ruin of the contending classes”. Let it be the former.

• Print copies of the Manifesto are available via cpbml.org.uk/manifesto. It can also be read online at, for example, Marxists Internet  Archive, or on Kindle.

• Friedrich Engels is jointly credited as author, but he always acknowledged that “The basic thought running through the Manifesto…belongs solely and exclusively to Marx” (Preface to 1883 German Edition).