Skip to main content
Home » News/Views » 1944: Britain and the battle for Athens

1944: Britain and the battle for Athens 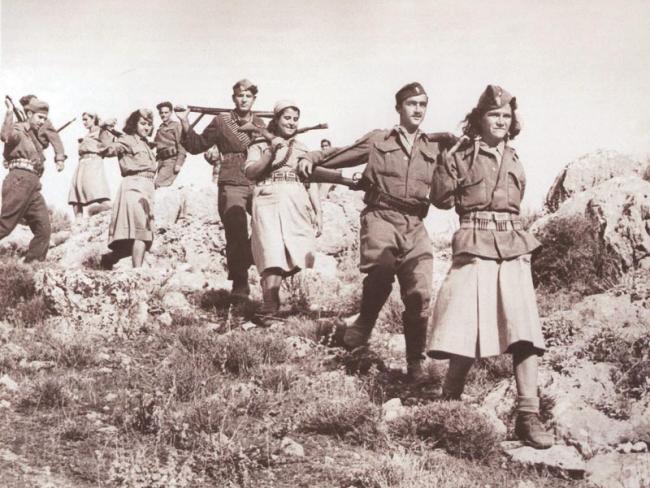 ELAS guerrillas: men and women fought against the Nazis, and after liberation ELAS and the Communist Party organised elections in the liberated areas where for the first time in Greece women were entitled to vote. But women were not enfranchised in the 1946 election following the reinstatement of the old order under British protection.

Syntagma Square in Athens is the site of the Greek National Assembly, where huge numbers of people demonstrated in the run-up to the election of Syriza this January. It is also the site of an armed assault by Greek police on a demonstration by hundreds of thousands of Greeks, with the complete support of the British military.

It was December 1944, still some months before the final defeat of Germany, but the Nazis had been driven from Greece in October. Like many countries in Europe, the people of Greece had responded to Nazi invasion with armed resistance led principally by the Communist Party (in Greece, the KKE). The German retreat in October 1944 had left the country effectively under the control of the National Liberation Front (EAM) and its military wing, the Greek People’s Liberation Army (ELAS).

Throughout the war Britain maintained a government in exile, headed by the King of Greece, George II. They sat out the war in Cairo, idle and powerless. Once the Nazis left the British moved them closer, to Caserta in Italy, and then to Athens itself.

With them came the Third Greek Mountain Brigade. It was formed by the British after the two Greek brigades in North Africa and the Greek fleet in Alexandria had mutinied in April 1944 over the refusal to create a government of true national unity.

That mutiny had collapsed when the British Admiral Sir Andrew Cunningham declared he would sink the entire Greek fleet “within five minutes” unless they laid down their arms immediately. The mutineers were disbanded and interned; only politically reliable officers and men were included in the Mountain Brigade.

On 8 August 1944, Anthony Eden reported to Churchill’s War Cabinet that a friendly government in Greece was essential for Britain’s strategic interests. He warned that might not happen without British help. The next day, the War Cabinet agreed to send a 6,000-strong force to Greece to remain after the Nazis left.

The Caserta Agreement in September 1944 put all the forces in Greece under the control of a British general, Sir Ronald Scobie. Britain moved to disarm ELAS, whose fighters had ousted the Nazis. On 1 December, advised by British ambassador Sir Reginald Leeper, the Greek government leader, Georgios Papandreou, demanded the disarmament of all forces – except, of course, the Mountain Brigade and the SAS-type “Sacred Battalion”.

On 3 December EAM held a massive demonstration in Syntagma Square, estimated at between 200,000 and 250,000 people. It was peaceful and unarmed. With British military police looking on, police chief Angelos Evert signalled police units to emerge from nearby buildings and open fire, killing at least 28 and injuring 148.

“Do not hesitate to act as if you were in a conquered city where a local rebellion is in progress.”

So began the Dekemvrianá, the “December events”. On 5 December, Churchill wrote to General Scobie: “Do not hesitate to act as if you were in a conquered city where a local rebellion is in progress. We have to hold and dominate Athens, with bloodshed if necessary.”

Scobie declared martial law. On 6 December, British troops took over the EAM headquarters, and open fighting ensued. But the EAM quickly took control of Athens, and fighting spread round the country.

British troops were vital as the government had only the Mountain Brigade and the Sacred Battalion, along with the right-wing royalist organisation “X”, which EAM saw as having collaborated with the Nazis.

But 6,000 British troops were not enough. The British Military Mission flew in the 4th Indian Infantry Division from Italy. Soon it was involved in direct fighting with EAM/ELAS in Athens.

Even this was insufficient. Greek scholar Eleftheria Delaporta documented in her 2003 thesis on Britain’s military and political role in Greece that between 13 December and 16 December Britain landed two British divisions, a tank regiment, two brigades and other supporting units at the port of Piraeus.

The British military went all out, using heavy artillery and bombing raids. The resulting carnage was described graphically by Neni Panourgiá in his book Dangerous Citizens: the Greek Left and the Terror of the State, published in 2009. “The British and government forces, having at their disposal heavy armament, tanks, aircraft, and a disciplined army, were able to make forays into the city, burning and bombing houses and streets and carving out segments of the city under their control,” he wrote.

“The German tanks had been replaced by British ones, the SS and Gestapo officers by British soldiers…Navigating the streets proved dangerous because of government and British snipers, who would fire at will. ‘You would be walking in the street and suddenly someone would fall next to you, all bloodied, and you didn’t know if he was dead or just wounded. All you could do was run for cover.’”

By 15 January EAM/ELAS had lost their fight for Athens, and a ceasefire was agreed with General Scobie. A comprehensive agreement followed in February that saw ELAS disbanded. It led to the arrest of tens of thousands of communists and other former members of ELAS.

The result was predictable: right-wing terror groups went on the rampage, attacking villages that had resisted the Nazis, killing more than 1,000 communists and their supporters and employing widespread torture. In 1946, the KKE called for armed resistance, and a full-scale civil war began.

That civil war would have ended in victory for the communist side, were it not for huge aid in men, material and money. It came first from Britain (led by the postwar Labour government) and then when the government ran out of money from the US. But still, as Delaporta describes, with Britain playing the key role in policy.

• See also this excellent TV documentary, produced for Channel 4 in 1988

1945: Labour’s foreign policy
The euro prison
EU turns the screws on Greece
Troika abandoned as EU seeks a way out