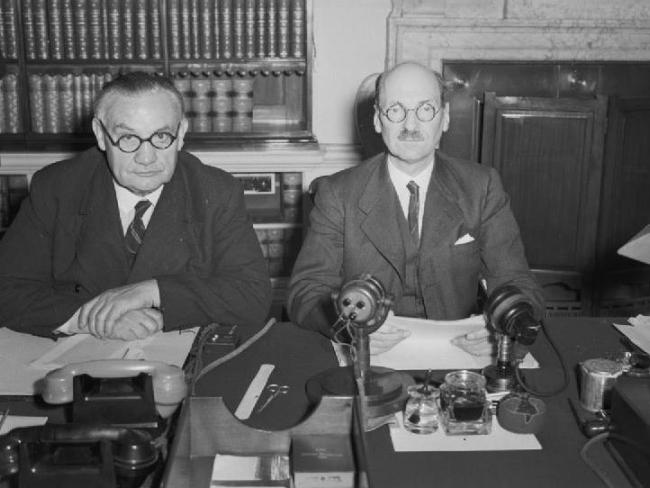 Prime Minister Clement Attlee (right) with Foreign Secretary Ernest Bevin. Together, they forged an anti-Soviet alliance with the United States and embarked on a systematic programme of repression across the British Empire.

The end of the Second World War could have ushered in a progressive foreign policy for Britain. Labour ensured that it didn’t…

In July 1945, during the last days of the Second World War, a new Labour government was elected with Clement Atlee as prime minister. Its election manifesto called for “A world of progress and peace”. Instead it at once adopted an aggressive pro-US and anti-USSR foreign policy.

British troops across the world were ordered to assist in restoring colonial empires. This was not “cold war”, but an aggressive colonial policy of attacking and thwarting national liberation movements.

As a result, the Attlee government maintained high levels of spending on the empire and on the armed forces – which in 1946 cost over 45 per cent of Britain’s GDP.

In January 1948 the Labour government set up a new Foreign Office department, funded by the secret service budget, to “pass over to the offensive” against the Soviet Union. The top Foreign Office civil servant, William Strang, said, “it is vital to the success of the operation that His Majesty’s Government should not overtly appear to be conducting a worldwide anti-Communist campaign, and we must in no circumstances appear to be interfering in the domestic affairs of friendly nations.”

In 1946, the British and US governments signed the UKUSA Security Agreement. Britain’s intelligence, espionage and covert action services would officially collaborate with the CIA and the FBI. This meant cooperating in US covert military action abroad.

In August 1948, the US government for the first time officially authorised guerrilla operations in the socialist countries. he CIA promptly launched operations into Soviet Azerbaijan, Armenia and Georgia.

‘Across the Empire the Labour government attacked trade unions…’

In July 1948, the leading members of the government agreed to allow American bases and nuclear bombers in Britain, putting Britain in the front line of any future war. The Cabinet did not accept the principle that there should be permanent US bases in Britain, but was overridden. The matter was not even reported to Parliament. The British government had no control over the bases.

Then, in 1949, Labour collaborated in founding NATO. That permitted “visiting” armed forces to be stationed in another member country, legitimising the US presence in Britain.

In Britain, Labour kept the wartime Order 1305, which outlawed strikes, only repealing it in July 1951. Across the Empire the Labour government attacked trade unions. In Malaya it banned them, in Kenya it arrested trade union leaders and in Sierra Leone the Colonial Office “re-organised” trade unions. And it led the charge to break up the World Federation of Trade Unions and to create separate international trade union organisations, polarised against the USSR.

In the Middle East and elsewhere the government backed reactionary governments against socially progressive movements. It partitioned Palestine. It continued its brutal occupation of Libya from 1943 to 1951. It set in motion the coup plot to overthrow Iran’s elected government, which Churchill and Eisenhower carried out in 1953.

In India Jawaharlal Nehru, who later became the country’s first prime minister after independence, accused the Labour government of being no better than its predecessors: “This is the old game of British imperialism. Whoever might be at the helm in England, its only object is to maintain its stranglehold over India and its colonies.”

When the Labour government said it would impose partition it caused massive popular protest, including a mutiny by a quarter of the Indian navy. British forces repressed it, killing 223 sailors.

This revolt was key to the British government’s reluctant decision finally to quit India. The British state then allied with the Islamist Muslim League to defeat the majority-supported Congress Party and ensure the country’s partition.

British governments had traditionally interfered in Greek affairs. The Labour government continued Churchill’s policy of armed intervention against national liberation forces. By 1946, Greek resistance was proving too much for the British government – costing over £130 million a year (equal to about £5 billion today).

Worldwide, Britain’s armed forces were overextended, trying to fight many colonial wars at once. In February 1947, Bevin announced that the British government could no longer pay for troops in Greece. US forces moved in, though the last British troops were not removed until 1954.

In 1949, Attlee approved Operation Valuable, the attempted counter-revolution in Albania, which was a complete disaster.

And when the war in Korea started, Attlee at once put Britain’s naval forces in the Far East at Truman’s disposal. In July 1950, the Soviet Union proposed a ceasefire and withdrawing all foreign troops from Korea. The US and British governments rejected this.

The US government wanted to destroy the Democratic People’s Republic of Korea. Britain’s Chiefs of Staff warned against this action. Attlee and Bevin rejected their advice.

Britain sent 100,000 troops to Korea and increased spending on the armed forces as its contribution to the US war of aggression. That war against Korea locked US and British foreign policy into an anti-communist straitjacket. We’re still living with the consequences.