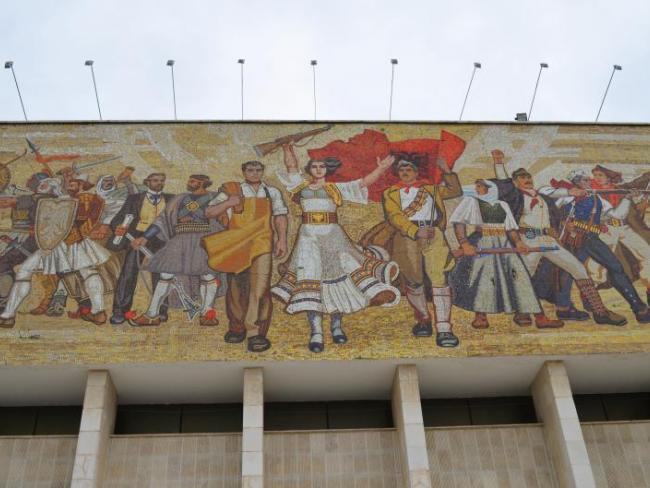 Mural over the entrance to Albania’s National Historical Museum, Tirana, built by the Party of Labour of Albania in 1981. Photo Workers

The actions of the European Union during recent weeks in Albania should finally end any illusions of the EU as a force for democracy or peace. Indeed, the blatant collusion between the EU ambassador to Albania, the US ambassador, senior NATO figures and the Albanian Democratic Party to undermine elections there on 25 June 2017 reached a peak in mid-May.

A 70-day “camp”, a marquee adorned with Democratic Party, US and EU flags, outside the president and prime minister’s offices, produced endless calls demanding the EU actively intervene in the elections.

The Democratic Party originally boycotted the election, probably because it thought it would lose. Barely a month before elections originally scheduled for 18 June, it reached agreement with the ruling Socialist Party, delaying the elections by a week.

It is calling for an EU-supervised and chosen “technical” government, which naturally would include itself, to take control. The technical government would then oversee Albania’s full integration into the EU without any pretence at democracy.

The Socialist Party differs only in that it wants to be the ruling party that ensures full integration with the EU. Both parties accuse each other of corruption, drug trafficking, and conniving with the army and police to seize power. Essentially both want Albania to be a rogue criminal state in Europe.

Albania’s Socialist Party has led a government of privatisation, outsourcing, free market economics, advised by Tony Blair (and other Labour Party figures). It has abandoned all notions of independence or sovereignty for Albania. It sees only one strategy: submerging Albania in the EU.

Staggering EU loans to Albania – overall, its external debt is more than 75 per cent of its annual GDP – have reduced the Albanian economy to a worse standing than Greece, Italy or Spain. The EU will never get its money back.

German, US, Chinese and Saudi Arabian loans and investment have flooded into the economy. China runs the only commercial airport in Albania – propped up by EU money – after buying the concession from a German company. Amid the poverty, Mercedes-Benz and BMW cars proliferate.

Albanian industry, developed under the genuine socialist years of the Party of Labour from 1947 to 1991, has been destroyed. Manufacturing industry has effectively been privatised and closed.

Textile production in Berat has now closed or been reduced to tourist handicrafts. Light engineering has been abandoned. Steel and metal production at Elbasan has shut. The railways are all but abandoned. The unique and extensive film industry has withered to almost nothing.

The oil industry has been privatised into foreign hands and is now bankrupt – the workers haven’t been paid for over 18 months.

The metal and mineral extraction and refining industries – aluminium, chrome, bauxite – have been privatised and downsized. The electricity industry remains in state hands, but what was once free to the public under the Party of Labour is now expensive and everyone is a “customer”.

In a latter-day version of Britain’s Private Finance Initiative, Albania is encouraging privatised hydroelectric plants throughout its extensive river network. The state is funding everything and guaranteeing to buy the power – another licence to print money.

Meanwhile, Albania claims to be going green, abandoning all energy generation other than hydro and solar. The power stations once used for heavy industry lie dormant and collapsing, as do the industries (such as cement, fertilisers and steel) they once supplied.

About half of the population are unemployed, with a fifth of the 4.5 million population described as “in transit” – that is, having to work abroad. Fully 30 per cent of all 15- to 29-year-olds are officially described as being outside of education or employment.

Though two of the legacies of the socialist years of 1947 to 1991 remain – free education and a free health service – both are being targeted by EU privatisation. Such measures led to the temporary closure of the new private university of the city of Berat due to what have been politely described as “irregularities”, such as the awarding of degrees to a Middle Eastern prince who never set foot in Albania.

Albanian agriculture lies largely abandoned. An estimated third of the population has moved from the north of the country to the south, from villages and agricultural towns to urban centres, looking for work.

‘The depopulation of the countryside is coupled with illegal land grabs.’

With the collapse of the communes and collectives, the terracing of Albania, which guaranteed food production and self-sufficiency throughout the 1970s and 1980s, has been abandoned. Without the collective responsibility to maintain them, the schemes which drained Albania’s mosquito-ridden marshes and reclaimed rich agricultural lands, another legacy of the Party of Labour years, are on the brink of collapse.

Tirana, the capital, has seen its population explode from 130,000 in 1990 to 800,000 today. It is estimated that half of Tirana’s population are transient, picking up jobs in services, bars and car washes.

The depopulation of the countryside is coupled with illegal land grabs, falsification of land deeds, and unprecedented unplanned construction. With the land grabs comes the emergence of large-scale capitalist farming.

The once-unspoilt Albania Riviera could now pass for Alicante. Rows of empty apartment blocks are for sale or to let, many built without planning, unregistered to avoid taxation. Planned development for people’s need is replaced by anarchy.

The economy is described as 50 per cent black and 50 per cent grey, with criminality and corruption rife. All the talk about democracy and freedom is just a fig leaf for unbridled greed and degradation of people – capitalism without restraint.

Tourism, touted by the EU as Albania’s economic saviour, is dominated by gangster interests. It’s a tourist market aimed at Eastern Europe, one which will undermine Greek, Italian and Spanish tourism: another crisis waiting in the EU’s wings.

Many of the gangs that dominate drug smuggling arise from the criminal elements repressed from 1947 to 1991. They found a natural home with the Democratic Party, though the Socialist Party has its own cohorts. Albanian agriculture now produces vast cannabis crops – so much so that Italy’s anti-drug police openly comment on the air pollution created when the gangsters fire their fields rather than let the police and army bulldoze production in the mountains.

‘The once-unspoilt Albania Riviera could now pass for Alicante.’

To be part of the EU you must – in practice – be part of NATO. While Albania’s integration into the EU is slow because of the instability of the economy (the country has been relying on advice from Irish financial consultants, survivors from the Celtic Tiger crash of 2007/2008!) its integration into NATO was achieved at lightning speed.

By joining NATO, Albania, a country whose standing army numbers just two to three thousand plus Special Forces, has become a surrogate for Turkish military interests. As the biggest military force in NATO after the United States, Turkey becomes Albania’s shield – and more.

Turkey’s attempt to regain a presence is reminiscent of the Ottoman Empire. Turkish, Iranian and Saudi funds vie with one another in re-establishing mosques, while US foundations bid for the Christian market.

Turkish president Recep Erdoğan’s sabre rattling and regional power plays, conniving with Isis in Syria and elsewhere, are reflected in the Democratic Party’s call for a Greater Albania and the revision of the 1913 Balkan Treaties.

The socialist government of 1947 to 1991 had always rejected treaty revision, which would bring with it the threat of regional war. In ominous echoes, the Greater Albania call comes with agitation in the region for a Greater Macedonia, Greater Serbia and Greater Croatia.

This warmongering serves only to split the region, enabling the EU’s divide and rule. Its murderous track record in Yugoslavia shows its model for regime change.

What is the EU’s commitment to Albanian “democracy”? It is to conspire to overthrow the elected (pro-EU and capitalist) government and likely winner of the forthcoming 25 June elections.

Meanwhile, the EU commitment to “peace” through its NATO partners threatens the nominal independence and statehood of Albania, barely a century since the treaties which put a stop to the Balkan Wars of the early 20th century.

The Albanian word shitet means “for sale”. It appears everywhere – very apt for the EU dream.