The arts in a time of coronavirus 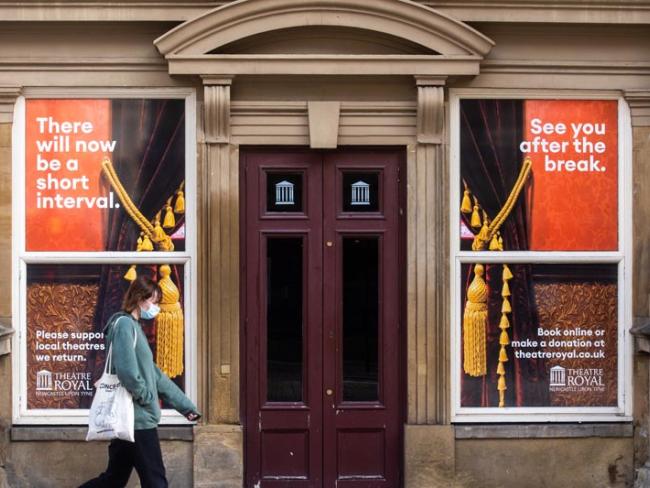 While a significant minority in the cultural industries cried (literally) over their imagined loss through Brexit, coronavirus succeeded in uniting the country around a cause all corners of Britain could agree on: survival…

Little could anyone guess, as a new era of freedom from EU control dawned, that a deadly microscopic “critter” was about to give a mighty boost to independence.  When Covid-19 struck, the creative sector had a choice. It could either wallow in lamentations – or adapt. It chose to adapt.

Needless worries over visas and cultural exchanges were put aside. Celebrities who had shown contempt for those they considered less sophisticated, less well-travelled, and less cosmopolitan than themselves now united to preserve, for a post-Covid (and post-colonial) world, British theatre, music, museums and heritage.

Despite the brutal suddenness of the pandemic, artists rose swiftly to the challenge. As Beth Bate, director of Dundee Contemporary Arts, said, when considering how to promote cultural value with Dundee Council, “We will come up with imaginative solutions. If we in the arts are not going to, who is?”

Covid has been a seismic shock to the arts because without reliable subsidy the financial foundations are perennially shaky. Workshops and studios carry high fixed costs. Arts Council and Lottery funding is never enough for the many freelancers and voluntary bodies that depend on it.  Victorian theatres with their crumbling plaster ceilings are expensive to maintain and in London’s West End rely on international traffic, which ceased overnight in March.

The government’s arts recovery package was a loan, not a grant. It was aimed at saving institutions, not jobs and skills. With limited trade union control, redundancies were inevitable, and they hit architects, surveyors and engineers as well as performers. The careers of many newly qualified young people ended before they began.

But the sheer human will to survive was boosted by proactive grassroots organisation. A colossal organised industry exists behind the scenes, drawing on an extensive reservoir of skills, unseen by the general public. It was up to the workers themselves – the stage managers, the riggers, carpenters and electricians, the actors and opera singers, the directors and conductors – to develop a strategy to preserve their skills and inspire audiences to return.

They took Herculean steps to make workplaces and venues safe. They planned socially distanced live performances and festivals, with the audience seated in household bubbles. They mounted “Drive and Live” opera in parks and car parks. When government guidance changed abruptly, they streamed pre-recorded performances. One innovation on Zoom was Interactive Shakespeare, where the audience participated alongside the cast.

New forms of cooperation sprang up. Publishers relaxed restrictions on digital distribution of copyright works to facilitate impromptu performance and live-streaming. Through a series of online events, stage managers shared their expertise in reconfiguring space, and this was taken up by schools.

Old theatres with their warrens of cramped corridors and dressing rooms found it more difficult to follow their own advice. Yet by November, as the uniquely British panto season drew near, live entertainment venues were reporting that they had no known cases of Covid.

Having strained every sinew to keep staff and audiences safe, theatres such as Newcastle, Salford and Birmingham naturally questioned the need to close when their towns were put into Tier 3 restrictions. They compared their efforts to Sisyphus, condemned forever to push a boulder uphill. In December the National Theatre launched its own streaming service, drawing on a library of past productions and providing a platform for future performances. School bookings began to roll in.

Subscriptions at a fraction of the cost of live theatre tickets are intended to help support the freelancers on whom the shows depend. Token subscriptions have enabled small venues to keep going despite exorbitant rents. Big events, such as the annual Cirque du Soleil, were helped through public donations via YouTube.

As part of its forthcoming Culture in Quarantine initiative, the BBC will feature 15 newly recorded plays on TV and radio, also on iPlayer. More than 12 theatres and producers across Britain will participate in a three-week season that will include a mix of premieres and shows being filmed for television for the first time.

In response to the rise of online performance, actors’ union Equity announced plans to draw up a streaming media agreement because so many members are working without contracts. The producers argue that the union “has no jurisdiction over cyberspace” and that actors participate “from the safety and comfort of their own home”. This will chime with what workers in other industries have been hearing from employers taking advantage of the government’s instruction to work from home.

As with theatre, the need to stay connected with the public also motivated galleries and museums. They were already developing digital technology as an educational tool. Now they extended it to reach a wider audience in new and exciting ways.

The National Gallery and the British Museum led the way with tours curated by specialists. No longer were they required to spend millions of pounds on internationally competitive blockbuster exhibitions. There could be a revived focus on the local, on forgotten British arts and crafts – ironically, a case of the tiny pathogen helping put Brexit into practice

In the world of design and heritage, those barred from their workplaces found innovative ways of expressing their working identity. Beautifully crafted face coverings, some with William Morris patterns, appeared for sale on social media. Mask technology was taken up by theatrical costume departments, for instance at the English National Opera, providing singers and instrumentalists with the means to resonate and breathe, without intake of fabric.

It may seem too obvious to mention, but the mental health of millions in isolation has depended on the arts via TV, radio, tablets and phones. The constant companionship of drama, literature, comedy and music, often taken for granted as background noise, cannot be underestimated in saving the nation’s sanity.

Appreciation of the NHS in saving lives was incorporated into much of the activity. As the Cabinet, unaccustomed by virtue of its class to approach ordinary workers for help, dithered and faltered during the PPE shortage, costume professionals up and down Britain raised money and sewed scrubs to enable medics to carry on working. A hitherto unsuspected army of trained doctors emerged out of hiding from the thespian ranks to staff intensive care wards and A&E.

Circuses offered tents and equipment for field hospitals. Choirs sang and bands played. Museums donated money they scarcely could afford. Without missing a beat, the union for professional tourist guides created a market in virtually guided tours peering into the hidden corners of Britain, and made these tours free to the NHS. This genuine solidarity between groups of workers springs from a deeper historical place than the banging of pots and pans on a Thursday night.

Britain’s success in administering the first set of vaccines, with a second, Oxford-based, vaccine due imminently, will stiffen the collective resolve of workers. But much work lies ahead. Britain’s pioneering role in science and technology is today fundamental to the arts.

Digital technology is innovative and exciting, and should be developed to complement live performance. It is the perfect medium for gamers, whose creativity contributes so much to today’s economy. For the foundations of the arts to be rebuilt stronger, the country must reconstruct its economic base by manufacturing the things future generations will demand.

That said, virtual experience is no substitute for living and breathing humanity. We have been solitary, largely passive, recipients of performance art, instead of that warm responsive audience performers need for spontaneity. When this crisis is over, people will clamour for a full return to theatres and galleries, to argument and lively tableside conversation.

Perhaps then, that conversation could include more than tacit acknowledgement by the cultural community of the good sense of the majority, who in 2016 created an escape hatch for the nation to realise its potential.

1951: the Festival of Britain
An artist of note: Turner and the new £20
Creatives organise to survive
Creative workers in fight to save their industries
New arts trade union formed