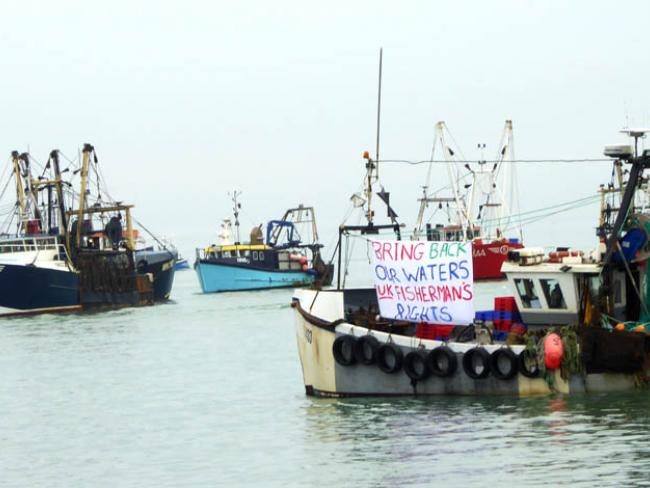 20 fishing boats had been expected at Hastings, but boats from Rye, Newhaven, Dungeness and Eastbourne boosted the number to 30. Photo Workers.

Other armadas formed in Hastings, Milford Haven, Plymouth, Portsmouth and Newcastle. In Hastings local fishermen’s relatives, standing ashore, said the prospects for their survival in the industry are poor. Politicians including Theresa May and Amber Rudd the local MP have broken their promises about fishing and will likely betray again in the final deal they strike with the EU.

Instead, fishermen want a no-deal departure from the EU. That could save the industry if we asserted our own control of British waters, conserving the fish by a “days at sea” limit on fishing.

“This is only the start of resisting the sell out of fishing and indeed the whole Brexit vote,” said Fishing for Leave. “Sunday’s collaboration, and the vast showing of public support, shows how much fishing and the requisition of our nations water’s means to coastal communities.”