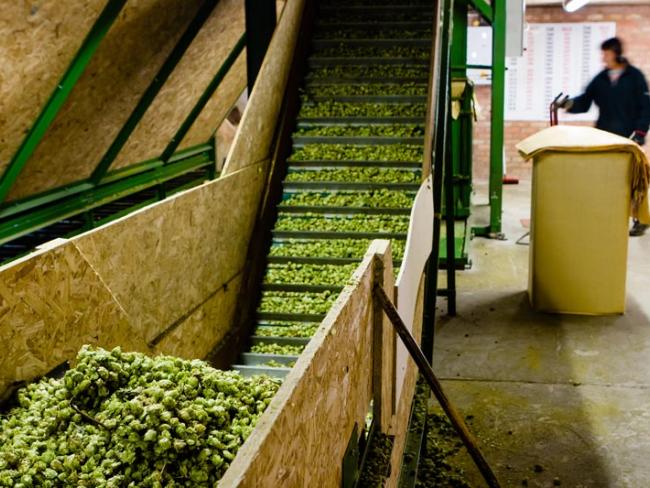 Sorting English hops, ready for drying and packaging for the brewing industry.

One of the biggest opportunities created by leaving the EU is for Britain to become more self-reliant in food production. This is already official policy of the National Farmers Union which represents independent farmers and farming employers (see 1: Farmers union looks forward).

Achieving that goal will require a collective determination by the British people to make it happen. The opportunity will be squandered if the future of agriculture is left to combined forces of politicians who want to stay in the single market and businesses that see Brexit as a gateway to importing cheap food.

Farming is a key supplier to the food and drink industry, one of Britain’s biggest manufacturing sectors. Together they contribute £109 billion to the economy, measured by Gross Value Added. Around 3.8 million people work in the two industries combined. About 475,000 are in agriculture – a number that’s been in decline, and more crucially it’s an ageing workforce.

Currently Britain’s farmers produce 60 per cent of our food. Tackling Britain’s reliance on the imported remainder will be challenging, but there is potential. One estimate is that Britain currently produces only around three-quarters of the food which could be grown in our climate.

Despite our heavy reliance on imported food, Britain exports food too – worth around £14 billion in 2016 plus a further £6 billion of alcoholic drink. Over 70 per cent is exported to the EU. Exports are growing; compared to 2015 up by 10 percent to the EU and by 16 per cent to non-EU countries.

An increase in domestic food production would in turn increase the proportion of raw ingredients sourced here for our food industry, currently around 60 per cent. Exporting where we produce more than we can consume is efficient trade. It pays for produce which we cannot grow in Britain.

Most of our exports are added value products rather than raw commodities: whisky, truffles, oysters, natural honey, beer, gin, cider, flavourings and specialist ingredients. There is also growth in meat exports such as lamb and pork.

“Over 40 years of EU membership leave a difficult legacy.”

Over 40 years of EU membership leave a difficult legacy for British farming and fishing. The Common Agricultural Policy (CAP) and Common Fisheries Policy (CFP) have distorted production and continue to do so despite partial reforms.

The cost of both CAP and CFP to Britain has been high. Food is overpriced, but key British farm sectors such as dairy are struggling. Our fishing fleet is a fraction of the size it was. And yet Britain’s net contributions to the EU for those policies are disproportionately high.

Despite this legacy, there is great potential for increasing agricultural food production. In particular this will rely on expanding vegetable and fruit production. That requires greater investment in technology for horticulture and development of skilled and semi-skilled labour working in that sector.

One of the most concise summaries of the damage done to British farming by the CAP was offered by Michael Gove, Secretary of State for Environment, Food and Rural Affairs (see 2: 'Fundamentally flawed').

In his speech entitled “Farming for the Next Generation”, Gove guaranteed farmers the same level of subsidy until 2022, and after that he proposed to move away from subsidies for inefficiency and to use public money for the public good. In the interim he called for the development of a coherent British policy on food, looking at agriculture, the environment and public health in an integrated way. That’s a bold aim, akin to the push to feed the nation during the second world war.

The development of skills in the farming industry will be an early test of whether this policy can be made real or will remain only fine words. Some sections of British agriculture, especially in vegetable and fruit production, have become heavily dependent on importing cheap labour.

Gove made it clear that farm employers must think differently about skill; he said, “industries which come to rely on importing cheap labour run the risk of failing to invest in the innovation required to become genuinely more productive. Labour-intensive production inevitably lags behind capital-intensive production”.

Around two-thirds of farmland is owned by working farmers. Other farmers rent land but those opportunities have declined, especially for young people wanting to join the farming workforce.

Around 60 per cent of the total labour on farms is accounted for by the farmers and their immediate families. That’s unusual compared to other industries. A further 25 per cent are workers with regular employment and around 15 per cent are casual workers. Even among the farmers themselves and their regular workers a high proportion are part-time – many need other sources of income.

A few weeks after the EU referendum Stephen Devlin, an economist at the New Economics Foundation, published research on the British agricultural workforce. He described how market conditions and policy changes during the period of EU membership made the life of farmers and farm workers more insecure “with increasing pressure from market-dominating supermarkets pushing down on the profitability of farming and workers’ protections disappearing along with the Agricultural Wages Board (in England).”

“Over time”, Devlin says, “the composition of the workforce has changed, towards a more flexible labour force with many more casual or seasonal workers employed, often from abroad.” He goes on to predict that the future workforce will be smaller but more highly skilled largely because of technological advance.

But he is concerned that for “a labour force that is currently dominated by men over 55 years of age, attracting talented and passionate people to the sector could be a challenge.” Simply, the industry must move away from the current prevalence of low investment and low wages if it is to implement the NFU’s post Brexit vision and to increase food production.

Step one in attracting talent is to increase wages. A Farmers Weekly survey in 2013 found that the average hourly wage in agriculture was £8.74, a third less than the British average. Devlin points out that agricultural workers’ wages are determined by the entire food supply chain, and not just supply and demand within the sector or the degree of farm workers’ organisation.

He explains that “Price wars in the retail sector...will feed through the supply chain and exert continuing pressure for farms to cut costs.” That’s why dairy farmers, for example, are leaving the industry. And it’s why Defra must address the way whole food supply chains operate if it is to develop an integrated food policy.

Step two in developing future agriculture in Britain is to build a more highly skilled workforce. Fortunately, we have the capacity to at least start on that task. There are still higher education programmes in agriculture which play a key role in upskilling the next generation and are also reservoirs of British scientific knowledge in the field. And there are facilities in England, Scotland and Wales which have unique expertise in relation to the geography and climate of different parts of Britain.

‘The Co-op supermarket has committed to only stocking British meat.’

Universities UK reported a small increase in students in higher education agricultural and related subjects between 2002 and 2011. The past five years have seen a small decline – a trend we must reverse, as well as tackling the drop in academics trained in these subjects. On a positive note, these courses attract young people from farming and non-farming backgrounds and unlike the current workforce about half the students are female.

The number of people starting apprenticeship programmes in agriculture, horticulture and animal care more than doubled in the nine years to 2011-12. After falling back slightly, the numbers are increasing once more. It is hard to assess how many of these students become actively employed in food production. But these further education courses have a young age profile with many students starting at 16 or 18. Their choice indicates real interest in this area from young people; they now need opportunities to pursue that interest.

More informal training opportunities are expanding too. The Kindling Trust’s FarmStart programme gives new farmers the opportunity to try their hand at organic farming without having had to first commit financial resources to purchasing or renting land. Nourish Scotland offers a mentorship and peer coaching programme for people starting up a local food enterprise. The Landworkers’ Alliance creates opportunities for peer-to-peer support and learning among small-scale and sustainable producers. Such initiatives alone can’t create the development needed by the industry, but they can be part of the picture.

A population truly concerned about our national health would care as passionately about food quality and nutritional balance as it does about the NHS.
A recent survey found that half of all the food bought by families in Britain is now “ultra-processed”. Such food is made in a factory with industrial ingredients and additives invented by food technologists. It bears little resemblance to the fruit, vegetables, meat or fish used to cook a fresh meal at home.
At the same time there is a growth in consumer interest about where food comes from and a keenness to reduce the number of miles from field to plate. The Co-op supermarket has committed to only stocking British meat and only using British meat in its processed goods. It has achieved this by extensive collaboration with its farming suppliers and because there is a customer base which wants to buy British food. Integration is the key to boosting food production in Britain.

Every step of the supply chain matters – and the population’s insistence on buying British matters too.