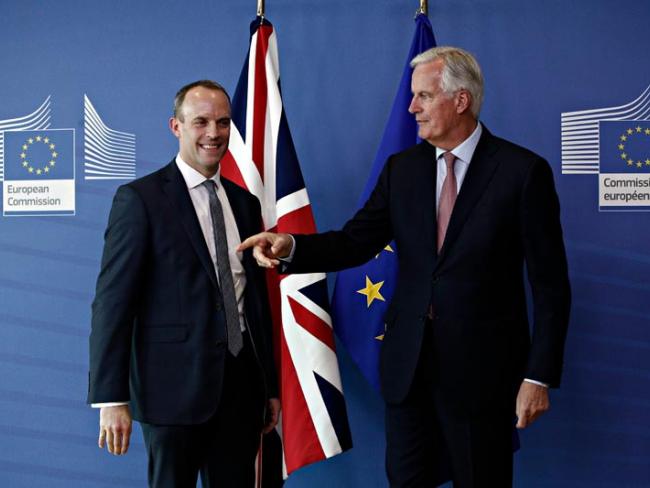 After the Brexit vote we should be declaring our independence, not asking for favours. Instead the government has been negotiating on its knees. This is sabotage by the majority of politicians from all parties who want to remain in the EU…

Imagine that as a trade union negotiator you go in to see the employer and the first thing you do is kneel down in front of him. Next you tell him that you don’t want to be doing this; you voted against doing this, but the members made you do it. And you tell him that you will accept whatever he says, whenever he wants. Would you do that?

Yet that’s what Theresa May is doing. She told the German Chancellor about the Chequers proposals before she told the Cabinet. She blocks any practical “no-deal” planning. She gave the EU an unconditional security guarantee and signed us up to join nearly every part of the EU defence union.

Or imagine that when selling your house, you tell potential buyers you must sell by the end of the day, you tell them that you have no alternative, you offer them a fee to buy it, and let them decide how much money you give them. And you then offer to let their lawyers draw up the agreement. Would you do that?

Yet this is what May is doing – paying billions up-front for the privilege of leaving the EU, letting their Court run the whole process. She offered the EU £39 billion and did not even tie this to any condition.

Let’s just walk away from the negotiations and tell the EU “no money”. That would hit them where it hurts.

May talks Brexit but this is Brexit in name only. It is a strategy of deception. She even created a shadow department, run by an unelected bureaucrat to undermine the Brexit department.

The government has already conceded European Court rulings in citizens’ rights cases initiated up to eight years after 31 December 2020. That gives us no control over our laws.

The government wants “a comprehensive free trade and customs agreement” with the EU, a free trade area with a common rulebook for all goods. This is a TTIP-style arrangement between us and the EU. If we do not pass the relevant EU law, the EU could cut us off.

Nothing common at all

It is wrong to call this a common rulebook; it is an EU rulebook. The White Paper says, “The UK would make an upfront choice to commit by treaty to ongoing harmonisation with the relevant EU rules.” Ongoing means now and forever into the future.

This would mean permanently obeying and applying all EU laws about goods; testing, packaging, everything. All goods made in Britain would be permanently subject to these laws, without our having any say on them. It locks us into the EU’s single market for goods.

The government tells us this will be ok because it will be allowed to “share its views with the EU as those EU rules are developed”. And if we dared to disagree on anything, the government accepts that the EU can demand “financial compensation”, can “impose non-compliance measures” and “reductions in market access” on us. That’s just taking our money and handing out punishment too for wanting to be independent. It is also the Remainers getting their revenge and doing everything they can to make Brexit appear untenable.

It locks us into “a common rulebook on state aid”, banning any state aid to industry. Even Jeremy Corbyn said, “The Prime Minister’s only clear priority seems to be to tie the UK permanently to EU rules that have been used to enforce privatisation and block support for industry.”

In response David Davis, who was the minister for Brexit, wrote to May, “...the general direction of policy will leave us in at best a weak negotiating position, and possibly an inescapable one. The Cabinet decision...crystallised this problem. In my view the inevitable consequence of the proposed policies will be to make the supposed control by Parliament illusory rather than real…the ‘common rule book’ policy hands control of large swathes of our economy to the EU and is certainly not returning control of our laws in any real sense.” The London Evening Standard, that is George Osborne, gloated that David Davis was right on every point.

We didn’t vote for a common rulebook with the EU, we voted for independence. This is not a White Paper, it is a white flag. We did not vote to surrender. We are declaring our independence, not begging for favours.

‘We didn’t vote for a common rulebook with the EU, we voted for independence.’

The White Paper says, “The UK’s proposal is to agree a new Facilitated Customs Agreement with the EU. As if in a combined customs territory with the EU, the UK would apply the EU’s tariffs and trade policy for goods intended for the EU.” There is no “as if” – this would be a customs union with the EU.

In an interview last year, the BBC’s Andrew Marr said to Nicola Sturgeon, “You have made it very clear that what you mean by a ‘soft’ Brexit or an ‘acceptable’ Brexit involves staying inside the single market and the customs union. The problem is that people were told all the way through the referendum that leaving the EU meant leaving those things.”

Sturgeon said, “I’m not sure…I don’t think that’s the case.” Marr rebutted that, “It is the case, if I may say so. I interviewed David Cameron, George Osborne, Michael Gove, Boris Johnson and I asked all of them, and they all said yes, it means leaving the single market.”

Trade agreements are created to protect multinational corporations and their ability to impose their terms everywhere. The government embraces the four EU key freedoms; free movement of capital, labour, goods and services. The proposed EU-UK deal is just another free trade agreement.

Free movement of capital means the right of establishment anywhere, anyhow, free from all controls. For example, US giant retailer Walmart wants the freedom to build its supermarkets anywhere in the world, wherever it chooses, heedless of the interests of the people of the countries or regions where it seeks to operate. That’s why most people in Britain opposed TTIP and other free trade agreements.

Industries don’t need deals by politicians to enable them to trade, they just trade. That’s what Lord Bamford says and he knows something about exporting. His firm JCB exports diggers to 140 countries, without trade agreements.

We stand for protection, not of capital or foreign investors, but protection of nations, of peoples, of the working class. We must control and protect, stop the sabotage.

Our referendum decision has for now stopped the government openly embracing free movement of labour. But May wants “a mobility framework” and her ministers talk of “freedom of mobility”. And the City of London wants to keep grabbing what it self-flatteringly calls “the brightest and the best”. That gives us no control over our borders.

All the government offers is delay and procrastination. We could have left the EU straight away after we decided to do so. But Cameron didn’t invoke Article 50 at once as he had promised. May didn’t invoke it until nearly a year later.

Now we’re supposed to have a nearly two-year transition period. This has huge costs. For example the EU is using the transition to enforce a discard ban on all our fishermen. A fisherman with quotas for haddock, cod, hake and herring must return to port as soon as he has caught the quota for any one of these fish. He is not allowed to catch other quotas and will make a huge loss on the trip.

“What kind of organisation forbids you to leave? A mafia.”

EU leaders like Guy Verhofstadt want us never to leave. He said in June that the EU would not ratify Brexit until 2038. We didn’t vote to stay in for another 20 years, we voted to leave now.

And Michel Barnier said, “It will be crystal clear at the end of this negotiation that the best situation will be to remain a member of the EU.” What kind of organisation forbids you to leave? A mafia.

The Sunday Telegraph editorial of 8 July, appearing immediately following the publication of the disastrous Chequers proposal, said, “Millions of people have indeed been betrayed, let down by a political class that had promised to implement the referendum…Last Friday felt like a political coup by the establishment.”

In the 21st century, not all coups are military coups. Some are now nice parliamentary coups, supposedly carried out in the name of “democracy”. Such “soft coups” have been called friendly fascism.

Commentator and journalist Robert Peston acknowledged “It was the official position of the British state to remain in the EU, and the people said no. That cannot be brushed aside as just one of those things. …it is to patronise our countrymen in a disgusting way to say they did not know what they were voting for.” He concluded, “...it makes sense for most of us to attempt to make Brexit a success, in good faith…”.

It is not legitimate for MPs to defy the referendum result and deny Britain independence. Most MPs voted against independence by backing Remain: only a small minority voted with the Leave majority in the referendum. No wonder most people think MPs should get the hell out of the way.

• This article is an edited version of speech given at a CPBML meeting in London.