A community's fight against buy-to-let profiteers 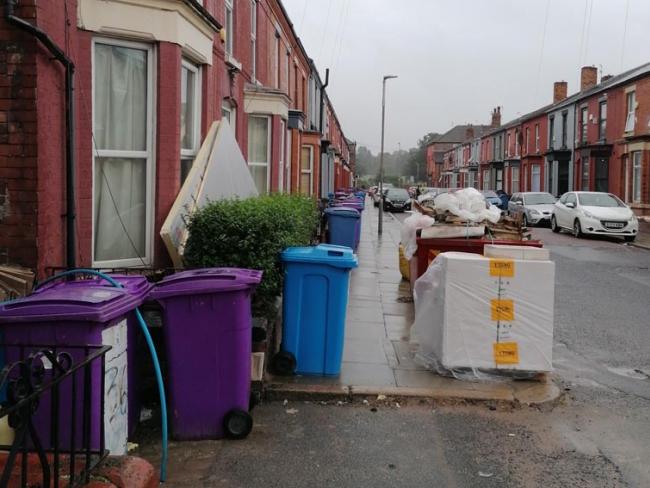 Areas around Britain’s universities are being blighted as once-stable populations are replaced by student lets and multiple occupation – but communities are fighting back. Workers looks at an example from Liverpool…

Picton is a predominately working-class area of Liverpool with a population of just over 17,000 at 2011 census. Like many such areas around the country, it has been changed over the years, through such measures as the sale of council housing by the Thatcher administration in the 1980s, and successive waves of immigration. Yet it has remained largely a cohesive community of family homes, predominantly a mixture of owner-occupied and Housing Association properties. Many families have lived within the community through successive generations.

Now a new and greater challenge to Picton’s survival as a community has emerged: the ever-escalating number of multi-occupancy homes, or HMOs (houses in multiple occupation). It’s a challenge that is continuing, and worsening.

These HMOs have been created through property developers buying up owner-occupied family homes as their original occupants die off or decide to move on. The new owners then gut these mostly two- and three-bedroom houses and convert them into flats for up to eight people.

Most of these conversions are aimed at Liverpool’s ever-expanding student population – up from 50,000 in 2015 to around 70,000 today. Within walking distance of both the main university campus, and of Liverpool city centre, Picton is also well served by buses. That makes it a desirable location for out-of-town students, and cheaper than the (also) ever-escalating number of student flats closer to the centre of Liverpool.

The rapid increase in HMOs is driven by property developers. Students, paying guaranteed rents in advance every term, make for lucrative business – more lucrative than in any other large British city, according to a report on buy-to-let profits published in August 2021 that showed average yields in Liverpool of 8.25 per cent a year.

But residents have been fighting back with the Stand Up For Picton campaign, founded in January 2019. Longstanding local resident Pam Smith has played the leading role in directing the campaign, with involvement from a solid core of active members and support from within the wider community.

Why was, and is, such a campaign necessary? What is the problem with HMOs?

Firstly, the community has been living for years within a seemingly permanent building site, with constant noise, ever-present and often overflowing skips, rubble, overflowing bins permanently parked on the pavement, and rubbish in the streets, including half-eaten food discarded by building workers.

Some families, including both those with young children and elderly residents, many of whom live alone, have had work going on either side of them, with all of the disruption to their peace and quiet and mental wellbeing that entails.

Even simple acts such as pushing a pram, or dragging a shopping trolley up to or from the nearby supermarkets, are impossible without walking down the middle of the road, putting people at risk from contractors’ vans and other traffic. Precariously arranged piles of old bricks, often left unattended for days at a time, pose an additional significant danger, particularly to young children.

The impression is that developers and contractors do not see instilling into their workforce a sense of respect for the community as a priority. Rudeness, arrogance, bad language, blaring radios, the using of gardens and doorways as a toilet, an inability to tidy up at the end of a day’s work or to comply with reasonable requests to modify their behaviour from residents, seems to be the norm from some.

On top of this, moving large numbers of students into a predominantly family area causes disruption in and of itself.

The Stand Up for Picton campaign has never been anti student. Most in Liverpool recognise that the student population brings great benefit to the community, economically, socially and culturally – and would agree that Liverpool being a desirable place for people to study reflects well on the city.

Most would also recognise that young people living away from their parents for the first time are entitled to do what young people do, and to enjoy the social as well as the educational side of university life.

But there are reasons why the student population of major cities has tended to be housed separately from the main non-student population, in university halls and student villages. Bringing large numbers of students into a family-orientated community is bound to cause friction – and this is exactly what has happened in Picton.

Some families and individuals, after already being forced to live through the process of conversion itself, find themselves sandwiched between two groups of seven or eight students and subjected to loud music and generally rowdy behaviour into the early hours of the morning, with parties often spilling out into gardens and the street itself.

This behaviour has continued through the various rounds of Covid-related restrictions. Complaints to the students themselves often meet with indifference or abuse, and little action has resulted from complaints to the police, the city council or the universities.

Planning permission has always been required to convert family homes into seven- or eight-bedroom HMOs. Yet this legal requirement has been effectively ignored in Picton, with Liverpool City Council granting permission retrospectively when work is completed or almost completed. Stand Up for Picton has yet to find one of these requests being denied.

Local authorities can also prevent any new HMOs from being developed at all once a certain tipping point, set at 10 per cent of the total homes in an area, has been reached. This power is called an Article 4 Directive, and much of the early part of the community’s campaign consisted of gathering evidence through photographs and the sharing of information by members of the campaign and the community to show that this point had already been reached.

Yet despite early support from two local councillors and the odd exception, the behaviour of the council, particularly of its leading members, has been obstructive and evasive.

Councillors, council officials, the previous mayor (currently awaiting trial on unrelated allegations of corruption and intimidation of witnesses), and the newly elected mayor, just pass the buck. They blame the government’s relaxation of planning regulations, while not using the powers they do have to stop redevelopment until planning permission has been granted.

On top of this, they refused until just a few months ago to impose an A4 Directive to halt the further spread of HMOs; ignored emails and evidence; refused, cancelled, or truncated meetings with campaign organisers; and gave out false, contradictory or misleading information.

So, where are we now?

The A4 Directive is officially in place. Yet work on converting further properties continues unabated. Tenants, mainly students, are moving into newly completed HMOs, all in clear violation of the law (were the law applied as it should be, these students would be at risk of rapid eviction). The streets continue to be permanent building sites. Anti-social behaviour continues, causing ever more friction with longstanding members of the community.

The fight goes on

But the community fights on. Campaign organisers have had a positive meeting with one of the four commissioners appointed by central government in June 2021 to oversee the running of the city following a damning report on council services. But whether action emerges from the meeting to halt and reverse the spread of HMOs is another matter.

Picton’s experience highlights the problems that result from the treating of housing not as a means to provide a secure home from where people can live in peace, raise families, commute safely to and from work, or enjoy a happy, productive, peaceful retirement, but as a commodity to be bought and sold for the profit of speculators.

More than that, it has shown the lack of involvement and democratic control that people have in the shaping of their communities. Whether it is ultimately successful or not, Stand Up for Picton shows that communities are finding ways to fight back.