A country fit for young people 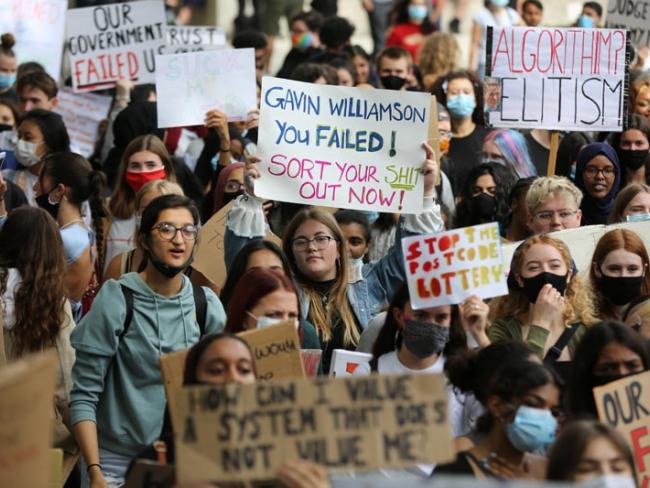 What kind of system turns its back on the young? Only one where the short term reigns, where planning for future generations is an unaffordable luxury. That is capitalism at the start of the 21st century.

The A-level grades fiasco, so damaging to many tens of thousands of young people, is also a symptom. It shows carelessness in every sense – not just slipshod, but lack of care, abandonment of care.

Even before Covid young people were bearing the brunt of capitalism’s decline – priced out of housing, deep in debt from higher education, working for free for months just to have a chance of a paid job, forced by financial pressure to delay having children themselves.

Then came Covid. Swift to close schools and universities, slow to open them again once the low levels of risk were known, the establishment simply didn’t care that a whole generation was missing half a year’s education.

Or take apprentices – young people learning a trade (see article, page 10). While roughly a quarter of British workers have been furloughed, it looks as though around half of all apprentices have been put on the government’s scheme.

And not just education and training. Young people’s physical and mental health have also been hit.

We face huge job losses and deep cuts in public spending. Who will pay the bill for slump, for the furlough, for the bailouts? It will be all of us, the working people of Britain, but mainly the young.

That doesn’t have to be their fate, our fate. From 1 January 2021 we become an independent country once more, free of the shackles of the EU. Free to invest in our own future, to build a country fit for young people.

Take Back Control was one of the slogans of Brexit. But we need to do more than take control back from Brussels: the people of Britain must take that control for themselves.

We can do this. This is the same working class which asserted itself by spurning the EU in the 2016 referendum, which refused to be cheated of its decision by the ensuing overwhelmingly pro-EU parliament and establishment. Which showed its care for the young by fighting for a decent future.

It is the same working class which has shown its intellect, courage, skills and knowhow in dealing with the Covid crisis when government floundered.

Big changes are coming. There will be a great struggle between the forces both for and against progress. Whether workers were for Brexit or not, it’s now time to pull together. Courage is needed. Let’s put the interests of the young at the heart of our plans for the future.